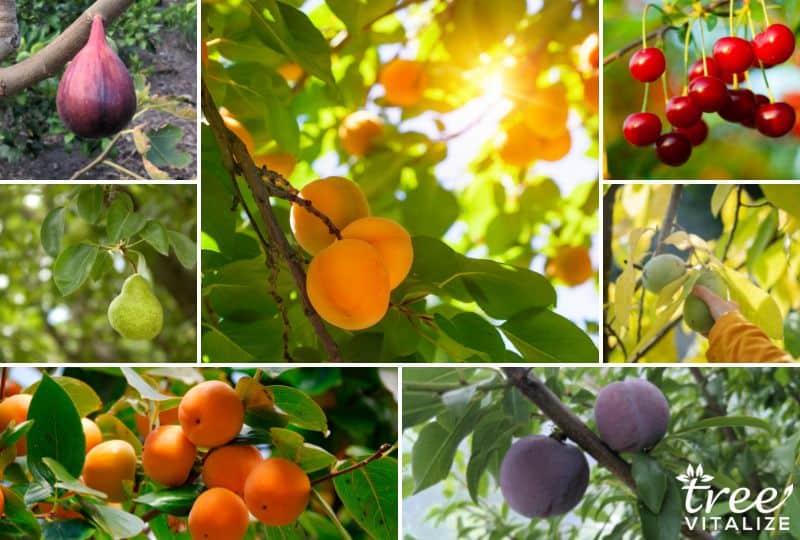 Homegrown fruit is in a class of its own compared to what you can buy in the supermarket.

Commercially grown fruit varieties are often picked depending on how suitable they are for shipping, and not for taste, texture or nutritional profile.

Growing fruit at home allows you to experience a whole world of different tastes you never knew existed, and to connect with the varieties our ancestors may have been familiar with.

The state of Indiana stretches over 300 miles from north to south, meaning what grows well in the south may not work in the north.

Read on for some of the best fruit trees to grow in Indiana to reap a bountiful harvest.

American Persimmons are native to the southern half of the state and as such are easy to grow with little care or attention. They produce an abundance of small fruit that are ready to eat in the fall and can be grown anywhere in the state. American persimmons can be eaten straight off the tree or prepared into puddings, preserves, or syrups. The crown of the tree is rounded and oval in shape.

American Persimmons don’t require much maintenance apart from pruning dead or diseased limbs or to keep them a manageable size. You’ll need both a male and female tree to produce fruit, with only the female producing fruit.

Most apricot trees are self-fruitful, so you’ll only need one tree to obtain a harvest. They are also moderately sized so can be planted in smaller yards without much trouble. They’ll continue to produce in summers when there’s little to no rainfall.

Whilst most apricots are self-fruitful, meaning they’ll be pollinated from flowers on the same tree, your harvest will be greatly increased if there’s another variety with the same flowering time nearby to increase pollination.

Apricot trees can be a bit tricky to grow and can succumb to various pests and diseases, so be sure to remain vigilant. Peach trees suffer the same fate in IN, but you can always try your hand and may be lucky some years, weather permitting.

Apple trees will grow in most soil types, including poor soils, and can tolerate frosts and drought, making them suitable for the Indiana landscape.

Tarter apples will do best in the cooler north or the state, whilst sweet red apples will have a better chance further south. Most apples will need another tree close by for pollination and abundant fruit set to occur, so bear this in mind. Unlike many other fruit trees, apples flower regardless of whether there are late spring frosts.

Apples are perhaps the most popular fruit grown throughout the united states and featured first on our best food producing trees article, so why not try your hand?

Pear trees grow well wherever apples do. They also bloom and ripen earlier than apples, making them a nice compliment to a home apple orchard. Pear trees also exhibit a good tolerance to heat, drought, and high humidity levels.

The main thing that pear trees won’t tolerate is wet feet, so be sure not to plant in a low-lying area of your yard where water tends to accumulate in wet periods.

The soil should be well-draining and have a pH of 6-7 for optimal results. Pears are generally troubled by fewer pests than apples are.

Plums need well-drained sandy soil to thrive, with a ph between 5.5 and 6.5. European plums are usually self-fruitful, meaning they’ll produce fruit without needing cross-pollination from another nearby tree.

Plum trees produce best when there’s a warmer winter and spring, so those in the coldest parts of IN may want to plant them in a spot with some protection from cold winds. Late frost damage can destroy crops.

Plum trees tend to be quite small in size, so can easily be grown in smaller spaces. Plums are also beautiful flowering trees so are a good choice for those gardeners who may be short on space and want to double up on functionality. Plums generally need between 200-700 chilling hours to set fruit, which isn’t a problem in IN which generally gets around 1,000 hours.

It’s common in southern Indiana, in moist wooded slopes, as an understory tree. In heavily shaded areas, the leaves can measure up to 10”. White mulberry, on the other hand, is quite intolerant of shade and prefers full sun.

Distinguishing between the two can be difficult, especially as they easily hybridize. Check this guide if you’re interested in growing red mulberries but are having trouble distinguishing between this and the introduced white mulberry. The fruit are sweet, juicy, and tasty and can be eaten fresh, dried, cooked, or preserved.

Paw Paws are native to Indiana, growing in low woods alongside rivers and streams, primarily as understory trees. They root sucker quickly, and can form colonies of trees in the wild. The fruit are greenish-yellow, when immature, ripening to blackish-brown with a taste described somewhere between a banana and a mango with an oblong to round shape.

Paw paws are the only temperate member of the custard apple family (Annonaceae) and have a decidedly subtropical flavor.

If you’re looking for a fruit tree to plant in your backyard with a different flavor profile than the average temperate world fruit then consider planting a paw paw. Being a native tree, it’ll also help support the local ecosystem.

Sour Cherries grow best in the upper ⅔ of the state, whereas sweet cherries will only do well in areas protected from fluctuations in the winter temperatures.

Sour cherrie trees prefer cooler weather and don’t tolerate long summers well, while sweet cherries won’t tolerate extreme cold, making them difficult to cultivate in IN, according to the Purdue University Cooperative Extension Service. However, home growers in urban areas may have more success as winter temperatures won’t be as low.

Sour Cherries are self-fertile, producing pollen with their own flowers, meaning you won’t need more than one tree to produce a crop. Bee activity will help increase your yield, so plant plenty of pollinator-friendly plants nearby. Sour cherries will grow in various soil types, provided the medium is well-draining.

Figs are normally hardy to about zone 7, but there are cold-hardy varieties capable of withstanding winters in zone 5 or 6. So be sure to plant a variety that will withstand the Indiana winter.

Even if the cold kills the fig back to the root zone, it’ll resprout the following spring. As figs are vigorous growers and most fruit is produced on 1st-year growth, there shouldn’t be a problem. (However, some trees do produce a spring-time breva crop on old wood.)

Another possibility is to wrap the trees up for winter, or plant them in a pot and move them indoors or into a greenhouse for the winter. Figs produce well when root bound.

There’s nothing quite like picking and eating ripe fruit straight off the tree. The taste and nutritional value will far supersede any commercially grown variety you could possibly buy in the store.

Growing your own fruit will also help lower your carbon footprint and can help better appreciate the cyclical nature of time.

Be sure to check the hardiness map of Indiana before planting to get an idea of your winter lows before you commit to planting.