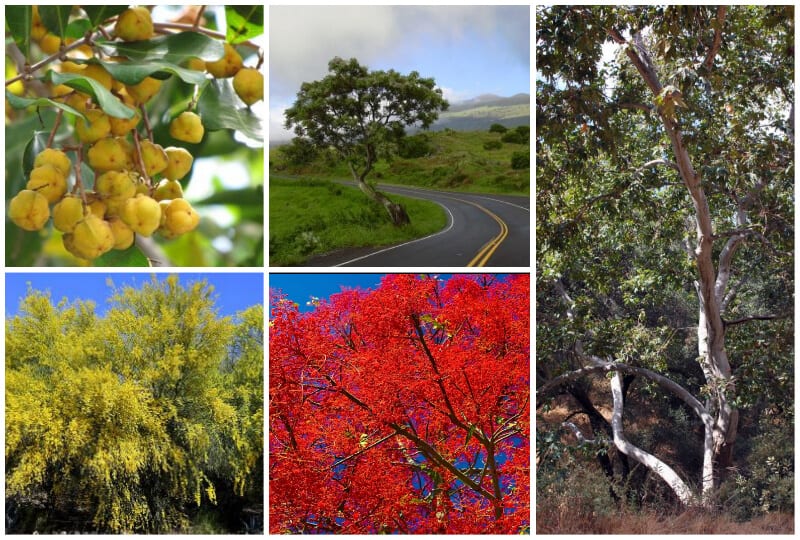 Southern California is a land stricken by drought and wildfires.

It’s important to bear this in mind when deciding what tree to plant next in your yard.

Unfortunately, the droughts are only likely to get worse before they improve.

The good news is that drought-tolerant trees can be some of the most dramatic in the landscape and there is a wealth of them for homeowners to choose from to add beauty and ecological benefit to the harshest of SoCal landscapes.

The Purple Leaf Acacia is a small tree or shrub with a wide-spreading canopy and weeping branches clothed in feathery and neat leaves.

The leaves emerge a shade of purple/lavender and turn blue/gray when mature. Late winter sees the appearance of clouds of golden-yellow rounded flowers in auxiliary racemes.

The Purple Leaf Acacia needs very little water and can be planted in almost any well-drained soil and works well planted on slopes or banks.

The Blue Leaf Wattle is a sun-loving tree that thrives in the low desert heat. This Southwestern Western Australia native is also extremely fast-growing, drought-tolerant and fixes nitrogen into the soil.

It’s being increasingly used in dry areas across the globe to improve the soil quality in attempts to reverse desertification.

Young branches are usually flattened or rounded and are often drooping. The leaves are narrow and have a sickle-like shape. The golden-yellow flowers are a sight to behold and appear in large elongated compound clusters.

The California Sycamore usually has two or more trunks, each with several branches. The bark is a beautiful white/gray with speckled shades of pink. With age, the bark peels away. The leaves are large and can measure up to 10” and turn orange/yellow in the fall.

The carrotwood tree is commonly grown as a multi-trunked tree whose branches and trunks tend to funnel inwards, like the stem of a carrot.

The dark and dense canopy of the tree is said to resemble the leaves of a carrot ready to be picked. The dense canopy and twisted trunk are what adds to the hardiness of the tree and protect it from winds and harsh weather.

The Carrotwood is fast-growing when young. The flowers are not overly ornamental but are followed by seedpods in the late summer to fall which provide more aesthetic appeal.

Once established, the Carrotwood is drought tolerant, and won’t tolerate standing water around its roots so should be avoided being planted around lawns.

The Red Bird Of Paradise is a small tree or shrub native to the tropics that produces flamboyant yellow to crimson flowers for a large period of the year. They are drought-tolerant yet frost-sensitive.

The Red Bird of Paradise will survive extreme heat and is best grown in full sun or partial shade. It’ll grow in either alkaline or acidic conditions provided they’re well-draining.

‘Pulcherrima,’ is Latin for ‘most beautiful.’ and is in part reference to the red/orange/yellow flowers with long red stamens that appear on the terminal ends of flowers. They bloom in abundance in the summer months and attract butterflies

The flame tree is a deciduous flowering tree from Australia. The Brachychiton genus contains numerous trees well adapted to the California climate. The leaves are tough, dense, and glossy, being densely lobed on younger trees and less so on more mature specimens and form a dense canopy.

Late in the spring, often before the tree has come into leaf, the red bell-shaped flowers appear in pendulous clusters that can sometimes cover the whole tree.

They are followed by 5” long woody seed pods that split to reveal yellow seeds. The Flame tree can be planted in full sun in well-draining soil and is drought tolerant once established.

The Black Walnut can either be a small tree with 1-5 trunks or a single-trunked specimen. Sometimes the main trunk forks close to the ground, giving the appearance of being two trees. The California walnut is capable of surviving aridity and poor soils.

The foliage is aromatic and the tree provides a habitat for birds who nest in the tree and eat the seeds. The California Walnut is endangered in the southern portion of its range due to excessive development. You can help restore this vital piece of the ecosystem by planting a California Walnut in your yard.

Hollywood was actually named after this drought-tolerant evergreen that is native to the western part of the state and the Sierra foothills. It forms part of the drought-adapted chaparral and mixed oak woodlands. The leaves are alternate and finely toothed.

Small white flowers appear in the summer and are followed by big bunches of bright red berry-like fruit in the fall which persists into the winter.

Butterflies and other insects visit the flowers and they give off a mild hawthorn-like aroma. The berries are consumed by birds such as mockingbirds, American Robins, and cedar waxwings. Native Americans eat the berries raw or mashed into water. They have a bitter and astringent taste which can be removed by light cooking.

California Holly can be grown in full sun or partial shade but will prefer the latter in the drier areas of their range. They can handle most soil types including sand, clay, and serpentine. Whilst drought tolerant, they’ll appreciate some summer irrigation and can be used as a fire retardant if given enough water.

The Blue Palo Verde has been growing in the southwest for centuries and is a mainstay of the Sonoran landscape. It can easily be distinguished by its green-grey bark and bright yellow floral display.

Whilst the small foliage is in fact heat and cold deciduous, the blue-green bark makes the Blue Palo Verde appear evergreen from a distance.

The Blue Palo Verde has a low canopy and is often multi-trunked. It can handle full sun and reflected sun. Some pruning is required in the early years to develop a walk under canopy. Being a native of Southern Arizona, little water is needed once they’re established.

The Pomegranate is a drought-tolerant fruit tree native to Northern India and Western Asia and grown extensively in areas with Mediterranean climates around the globe.

Pomegranates love heat and full sun and are distinctive ornamental trees with their funnel-shaped, orange/red flowers and dangling round fruit.

Whilst Pomegranates tend to grow in a bush-like habit, they can easily be trained into a small tree with regular pruning. Whilst they are drought-tolerant, they’ll appreciate some extra summer irrigation to help with fruit production.

Pomegranates will tolerate a wide range of soil types and grow best in the hot and dry inland valleys of Southern California.

The Australian Willow is a medium-sized evergreen tree native to the hot and dry interior regions of Australia where rainfall varies between 6-15 in. annually and extensive periods of drought are commonplace.

The Australian Willow will grow best in deep, heavy well-draining sandy loam. It’s a great garden tree for the delicate shade it casts, its pendulous foliage character, and its non-invasive root system.

The Chinaberry is native to India and Pakistan and is a small to medium-sized deciduous tree. It’s commonly utilized as a fast-growing shade tree due to its rounded crown. The Chinaberry is capable of producing ornamental berries in 3-4 years.

The small flowers appear in clusters and have 5 white and pale purple petals. The round fruit turns yellow upon maturity and are poisonous to humans and some other mammals, but birds are able to disperse the seeds.

The dense canopy of the Chinaberry makes it suitable as a shade tree. The flowers are fragrant and the berries provide ornamental interest. The hard seeds are used in making jewelry and other arts and crafts. It can handle full sun or partial shade, extended dry periods, and most soil types.

With the climate becoming more and more volatile and adverse weather conditions becoming more common, it’s prudent to put due thought into what tree you plant in your yard.

Southern California is an area subject to drought but this doesn’t have to negatively impact your garden planting. Take a look at the hardiness zone in CA you live in to find the most suitable tree for you.

Luckily drought-tolerant trees are some of the most remarkable in the landscape, so your garden can both be ecologically sound as well as beautiful.