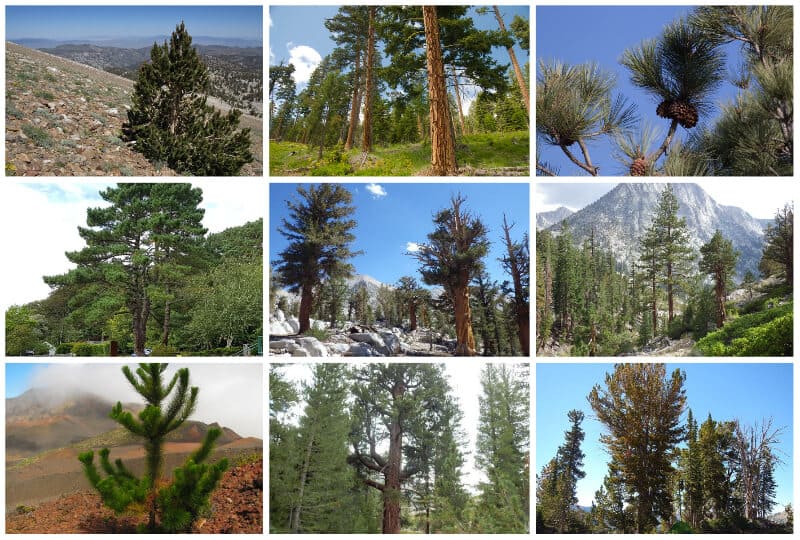 Pines are evergreen coniferous resinous trees admired throughout the world for their quick growth and stately beauty.

The heady aroma of their needles, edible and nutritious seeds, and the decorative potential of the cones have also helped raise their popularity.

There are currently at least 126 accepted members of the Pinus genus globally.

Both the North and South of California are home to numerous species of pine that you can admire in the wild or plant in your yard.

They can be seen with rounded and symmetrical crowns as well as with twisted ones from strong prevailing winds.

The Jeffrey Pine has a reddish-brown bark that is deeply furrowed in dark plates. Another distinguishing feature of the Jeffrey Pine is that the resin is said to have an aroma reminiscent of pineapple or vanilla. The needles grow in bundles of three, persisting for 6-9 years before being shed.

The Jeffrey Pine is native to high elevations in California and grows widely at elevations of 4,900 to 6,900 ft and prefers sites with shallow infertile soil. Soil textures where they can be found include sandy, rocky, gravel, and clay loams.

It’s intolerant of shade and can be found in mountain meadows as well as slopes bordering deserts.

The Foothill Pine is a slow-growing moderately long-lived pine. Its native range extends from Siskiyou County south through the foothills of the Klamath, Cascade, and Coast

Ranges and the Sierra Nevada to Ventura County. The Foothill Pine has an upright, upright columnar or pyramidal form and actively grows in the spring and summer.

The inflorescence is yellow and is borne in the early spring. The foliage is a medium shade of green and remains on the tree throughout the year. It can typically be found in areas with poor soils at elevations between 0-4500 ft.

The Bishop Pine has a very restricted range and is mostly limited to coastal areas of both NorCal and SoCal, as well as a few offshore islands and limited areas of Baja California. Bishop Pine is smaller than many other pine species and is often stunted and twisted when it has a coastal exposure.

It has a straight-to-rounded, contorted crown, with a dark grey and deeply furrowed bark. The contorted branches are ascending and spreading, whilst the dark yellow/green needles persist for 2-3 years.

It’s a drought-tolerant species that favors dry rocky soils. In cultivation, the Bishops Pine has been known to grow taller and quicker than in the wild, although this has been noted to have negative effects on the environment.

The long slender brown cones are some of the largest in the world and can measure 10-26 inches. The common name comes from the sweet sap exuded from the tree, and the nuts are also edible.

The straight trunk bears whorls of horizontal branches that support the conical crown. The immature bark is smooth grey/green and the twigs are reddish-brown. When mature, the bark turns a brown-purple color and sometimes develops into long scaly plates.

The needles are borne in clusters of 5 and are deep green on the outside, whilst whitish-blue on the inside. Brown flowers appear in the spring.

The Monterrey Pine has upward pointing branches and a rounded crown. The needles are bright green and appear in clusters of 3, are slender and measure about 3 inches long, and have a blunt tip.

The brown cones are ovoid are usually seen asymmetrically on the branches. The fissured bark is dark brown/grey and the cones need the heat of a forest fire to open.

The Monterrey Pine can be found in Santa Cruz, Monterrey Peninsula, and San Luis Obispo Counties in CA. It’s a rare and endangered tree in the wild, whose resinous nature and twisted and knotty appearance differs from the Monterrey Pine in cultivation commonly used for lumber.

The Monterrey Pine can be grown along the fog bank but typically doesn’t thrive further inland.

The Shore Pine grows in central and Northern California. Contorta means twisted, referring to the growing habit of the young shoots. Shore Pines are fairly fast-growing trees and can live for up to 250 years and are typically found at elevations between 0-11 500 ft.

It’s an adaptable species capable of growing on boggy shores, on sandy slopes, and rocky hilltops, and can handle direct salt spray and low nutrient availability.

Whilst some very old cones will open by themselves in mid-August to release seed, as with many pines, Shore Pines are serotinous, meaning they’re sealed shut with resin and need the heat of a fire to open.

Planted near the seaside, the Shore Pine can form intriguing architectural forms. Further inland, they look good planted on drifts.

The White Bark Pine is the only Stone Pine native to North America and is a mountain species that can typically be found at elevations between 5000 and 10000 ft and often marks the tree line. It’s a long-lived and slow-growing species, which can take 200 years to reach maturity.

White Bark Pines are alpine species that typically have a shrubby, multi-stemmed, or spreading form. Exposure to high winds can make them contorted, gnarled, and twisted in appearance.

The bark is smooth and silvery when young, and becomes reddish-brown and furrowed with age, sometimes forming irregular scaly plates.

Best growth can be seen on rocky, well-drained soils on ledges, outcrops, and cliffs, but they are adapted to coarse and textured soils too. The White Bark Pine has a higher fire survival rate than other high-elevation species. The cones are an important food source for many small mammals and birds.

In the Sierra Nevada, they are limited to areas around Sequoia and Kings Canyon National Parks and in both instances are tree line species.

The needles appear in clusters of 5, and are deep glossy green on the outer face, whilst paler on the inner side and persist for 10-15 years. The dark purple cones ripen to red-brown and have soft, dark, and flexible scales, each with a central prickle.

The Two-needle Pinyon Pine is a single-stemmed tree with a strongly tapering trunk at higher elevations. At lower elevations, it’s often multi-stemmed, sprawling, and bushy and the reddish-brown bark is irregularly furrowed.

The evergreen needles come in groups of 2 and are yellow-green, blue-green, and upturned, with smooth/finely toothed edges.

Two-needles Pines can be found on mountain plateaus, mesas, and growing in open woodlands at 1200-2450 ft elevation, alone or mixed with various types of junipers. Two-Needle Pines are one of the slowest growing and most drought-resistant types of pine.

They grow best on higher, wetter sites, just below the zone of the Ponderosa Pine.

The Ponderosa Pine is the most widespread pine in Western North America. It’s a large, straight trunked tree with a wide-open canopy and an irregular crown that is pyramidal when young and flattens out with age.

Like most western pines, it grows most abundantly in mountainous terrain, including the Cascades, Sierra Nevada, and the Rocky Mountains as well as other areas.

The bark is deep, blackish/dark-red/brown on young trees. A mature tree’s bark is yellow brown-to-russet with scaly plates with deep irregular fissures. The needles appear in groups of 3 or sometimes 2-5 and are olive green or yellow-green.

The Great Basin Bristlecone Pine is a long-lived species found in the high mountains of the southwestern USA. They are known as being the longest-lived non-clonal species on the planet.

They grow in isolated groves just below the tree line in harsh conditions with strong winds and a short growing season. Pinus longaeva is one of three closely related species commonly known as Bristlecone Pines.

The Great Basin Bristlecone Pine is a medium-sized tree whose trunk can reach up to 11 ft in diameter. The bark is orange, thin, and scaly at the base. The needles occur in fascicles of 5 and are long, deep-green/ blue-green on the outer side with a white band on the inner side.

The leaves remain attached longer than any other species on the planet; 45 years.

They are adaptable to any soil type and grow on exposed mountain slopes and ridges in the subalpine zone to the timberline at elevations of 7500- 11,500 ft.

The Knobcone has a straight trunk and conical crown. The bark is smooth and flaky, with shades of grey-brown when young, turning reddish-brown with shallow, furrows and scaly ridges as it ages. The red-brown twigs are often resinous. In unfavorable conditions, the Knobcone Pine can remain in a shrub-like state.

The One Needle Pinyon Pine is a slow-growing medium-sized tree with a rounded form. It can be found in California in the Sierras and the Transverse Range, at altitudes between 1200-2300 ft, though sometimes outside of this range.

It occupies the aridest areas of any of the pines in California. It often forms open woodlands mixed with junipers.

It’s the only single-leaf pine in the world and its foliage is grey-green to waxy pale-green-blue in appearance, with stomata on both the inner and outer surface. The cones are the largest of any of the true Pinyon Pines and ripen to yellow at 18-20 months old. They have a small number of thick scales.

The Torrey Pine is the rarest pine in the United States, and can only be found on the coast of San Diego County and two of the Channel Islands. The wild population is limited to about 3000 trees.

It’s a broad and open-crowned tree with long gray-green needles in groups of 5. The cones are heavy and are typically between 3 and 6 inches long and broad, and contain large edible seeds.

In its semi-arid native range, it grows slowly in dry sandy soil and has an extensive root system, with a mature tree capable of having roots extending 246 ft. It collects extra moisture from summer fog to supplement the low level of winter rainfall. Trees exposed to coastal winds often take on beautifully sculpted forms.

In rich soil and supplemental irrigation, the Torrey Pine is capable of growing much larger than the wild populations.

It’s a member of the White Pine group, (Pinus subgenus Strobus) and like all members of this group have needles in bundles (fascicles) of 5 with a deciduous sheath.

The needles are finely serrated and the cones are long and slender with thin and flexible scales. The Western White Pine prefers sandy or loamy soils and doesn’t grow well in clay soils.

The extensive landmass of the state of CA encompasses landscapes as diverse as high mountains, coastscapes, and low-lying deserts. The differing topography of the land is home to a plethora of species of flora and fauna, including various types of pine trees.

Pines are hardy and adaptable trees, many of which will grow on poor, and rocky soil.

Before considering planting a pine tree, take a look at California’s planting zones to find out the most suitable variety for you.

Failing that, you can always admire them in the wild.