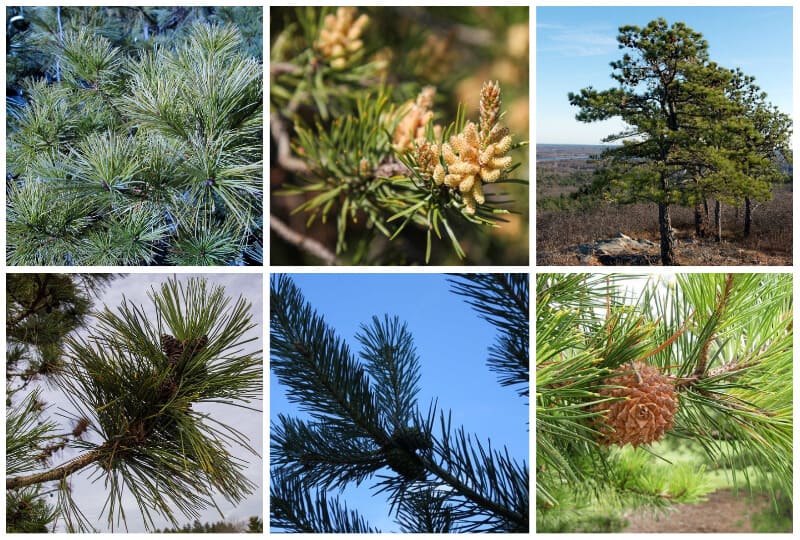 Illinois is a state with 2 national forests and 142 state parks, meaning there are plenty of natural areas and trees throughout the state, including pine trees.

Illinois has 72,000 acres of coniferous forest, most of which are concentrated in the southern third of the state, according to the Department of Natural Resources of Illinois. Pines are evergreen, coniferous, resinous cone-bearing trees usually with a straight growth habit and a closed crown.

Before choosing a pine tree in Illinois, be sure to check the IL hardiness map to know which varieties will grow in your area.

8 Types of Pine Trees to Plant in Illinois

The Eastern White Pine can be found throughout the Northeastern United States and South Eastern Canada and are the largest northeastern conifers. They feature straight trunks and bluish-green, thin needles. The cones and slim, 6-8” long, and covered in a white resin. The grayish-brown bark is deeply furrowed.

Eastern White Pines can live as long as 400 or 500 years. The branching is tiered and horizontal, adding one tier a year, becoming broad and irregular with age. They can be found on rocky stream banks, in upland mesic sand and loamy sites, as well as on northern slopes.

The Virginia Pine can be found in the colder parts of Illinois in areas with poor, well-drained soil. It’s a scraggly, untidy grower, becoming flat-topped with age.

The trunk is reddish brown and the limbs stretch out irregularly. The cones are prickly, the needles are short and the crown is broad and open, filled with spreading branches. It’s often seen as a shrub in many areas.

The Jack Pine grows best in areas with cool summers and cold winters. It’s a scrubby northern pine and is found in the wild in poor, barren soils. It’s a small to medium-sized tree with a pyramidal shape, becoming open and irregular with age.

The lower branches often die off but remain on the tree when subject to a lot of shade. The needles of the Jack Pine are short, olive green in color, and 1 ½” long in bunches of 2. In the colder months, they take on a yellowish hue.

The cones measure 2 ½” long and are curved. They mature after 2 years and can remain on the tree for up to 10 years, either opening on the branches or remaining closed. The closed cones are sealed by resin and will open after forest fires to disperse seeds. Jack Pines are the only breeding ground for the rare Kirtland’s Warbler.

The Red Pine is a straight-trunked tree with ascending, horizontal branches and a rounded to oval crown. The base to the crown of the tree has a red tone to it, which lends the tree its common name.

In the wild, it can be found on ridges and plains, usually in sandy soils. The needles are dark green to yellow-green and appear in bundles of two. Female seed cones measure 2 ½” long and ripen after 2 years.

The Red Pine is the state tree of Minnesota and is not recommended for cultivation below zone 5 so will be best suited for northern IL. It has little tolerance for hot and humid summer conditions.

The Short Leaf Pine grows in dry rocky soil and is a medium-sized tree with a rounded to pyramidal crown. The bark is reddish brown and separated into large plates. The needles grow in clusters of 2 or 3 and are bluish-green and can measure up to 5” long. The cones are ovoid, and 2 ½” long.

The Shortleaf Pine can be found in Randolph and Union counties in IL, according to the Illinois government, in coniferous forests.

The Pitch Pine is one of the smaller Pines on this list. It features an irregular crown and a gnarled and contorted trunk, drooping branches, and a brownish-red bark that becomes black with age.

The needles are yellow-green, stiff in clusters of 3 that eventually turn dark green. The branching is horizontal and the crown is irregular. The cones are held in whorls of 3-5.

The Pitch Pine can be found in dry rocky sites. It’s a useful species in regenerating bare and depleted soils, where it’s slow to establish, but after 5 years can put on rapid growth. The Pitch Pine needs forest fires to reproduce.

The Loblolly Pine will grow in a wide range of soil conditions and can withstand drought when mature. It functions well as a shade tree thanks to its habit of shedding its lower branches, and due to its oval shape. It’s also commonly used as a screen.

The Table Mountain Pine, whilst mostly found in the Appalachian Mountains also grows in IL. features a crooked, leaning trunk and irregular crown of horizontal branches.

The foliage are yellow-green to medium green needles, up to 3” long held in tufts of 2-3. The ovoid seed cones are very short with scales and sharp spines. The bark is dark brown and is fissured into irregular reddish/brown plates.

Table Mountain pines typically occur at elevations between 1,500 and 3,500 ft above sea level. They grow mostly in dry upland forest in sandy soils and are brilliant at attracting many different forms of wildlife.

Pine trees are hardy trees, with many thriving in poor dry soil where other types of trees would struggle to get established.

Illinois is home to a number of different types of pine trees which can be admired in the wild, or planted in your own backyard should you wish to do so.