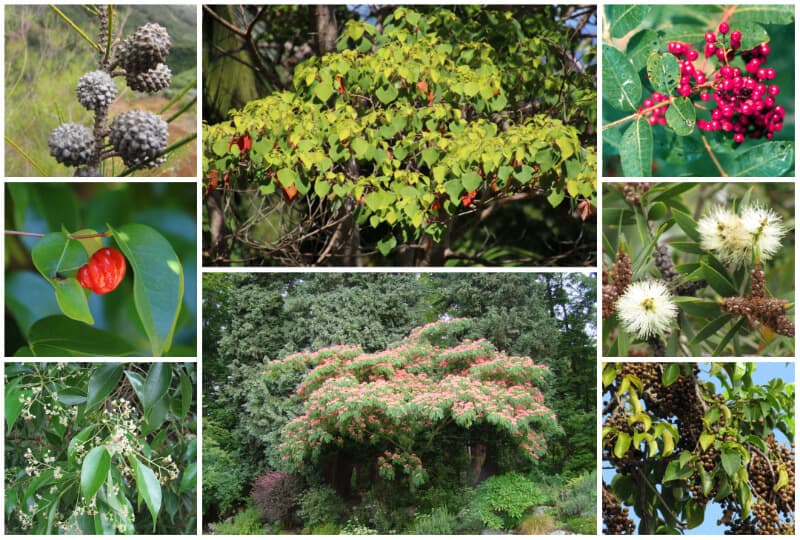 With subtropical and tropical climates and the wide-ranging USDA zones 8a to 11a, Florida has some of the broadest diversity of trees in the United States.

Thousands of both temperate and tropical trees grow there with ease. But this comes at a price.

The state’s climate and extensive coastline make it vulnerable to invasive trees from regions of the world with similar environments.

These fast-spreading non-native trees displace native plant species as they compete for resources. But they also threaten the habitat of native fauna, such as the endangered sea turtles.

Many of these invasive trees are gorgeous yet horrible for the environment. For example, the dainty yet exotic-looking mimosa tree is stunning. Most of these trees came to Florida through the horticultural trade.

Today, you can still find some of them, such as Chinese tallow, with its brilliant red fall foliage growing in yards throughout the state.

The Brazilian pepper tree always appears when you check any invasive trees list for Florida. Horticulturalists brought to Florida from South America in the 1800s because of its beautiful leaves and red berries.

They reminded people of the beautiful Christmas holly bushes. When the tree started to spread quickly and aggressively, it became clear that importing it was a bad idea.

Brazilian pepper trees like growing near water and crowd out valuable mangroves and other native plants.

Mangroves are important because they host many species of native birds and other animals. In contrast, the Brazilian pepper tree is a poor habitat tree for wildlife.

Growing, transplanting, or importing Brazilian pepper trees in Florida is illegal. Unfortunately, they are difficult to remove because they are itchy to the touch.

Melaleuca poses a danger to the wildlife of the Florida Everglades. Ironically, this tree is protected in its native Australia.

This beautiful yet aggressive tree has a many-layered paper bark and white bottlebrush—like flowers. It arrived in Florida in 1886 as an ornamental, shade, and windbreak tree.

Melaleuca spreads quickly by vast quantities of seeds that are spread by wind. They thrive in the wet, warm, and nutrient-rich soil of the Everglades.

Now, there are vast forests of melaleuca trees there. The danger is that the wildlife in these spots evolved to live in a primarily treeless ecosystem. So, these aggressive trees easily disturb the natural ecosystem.

Melaleuca, with its natural oils, is highly flammable, which poses a threat to areas where they naturalize in large quantities.

The camphor tree is a common Florida shade tree, popular because of its fast growth and beauty. It has waxy green leaves, attractive black berries, and a wide-open growing habit.

But the University of Florida discourages its planting in North and Central Florida because of its invasive record. This is unfortunate because, in its native eastern Asia, it is a beloved, robust, and reliable shade tree.

Camphor trees arrived in Florida in 1875 for ornamental use and camphor oil production. But it quickly escaped cultivation as birds spread its seemingly endless black fruits. Mature trees produce up to 100,000 seeds each year!

If you ever grow a camphor tree, you will notice the dozens, if not hundreds, of seedlings in your yard after the fruits drop in the summer.

Mimosa is one of the most beautiful trees in the Florida landscape. But it would help if you avoided the temptation of planting this gorgeous flowering tree.

This southwestern and eastern Asia native tree was a popular ornamental tree for many years because of its fragrant pink flowers and fern-like foliage. The delicate-looking puffy flowers appear from late spring through early summer.

Mimosa trees grow in various soil types and thrive in sunny areas. They grow quickly, which makes them compete successfully against native vegetation. In addition, mimosa trees produce many seeds that stay on the tree through the winter in pods.

The best way to get rid of a mimosa tree is to cut it down to ground level. But it would help if you were careful as they are sometimes re-sprout.

It is a shame that this tree is prohibited in Florida. Few trees offer such vibrant red color in fall, even in balmy Florida.

The tree has beautiful heart-shaped leaves and open seedpods that give the appearance of popcorn. Birds eat the seeds, and their droppings cause the seeds to spread widely.

Because of its beauty, you will still find Chinese tallow as ornamental shade tree in much of Southeast and northern Florida.

In Florida, protected natural areas such as the Paynes Prairie State Preserve are overrun by Chinese tallow.

Chinese tallow is hard to kill. The University of Florida recommends cutting it down and treating the stumps with herbicide.

Australian pine arrived in Florida in the 1800s for shade, lumber, and canal stabilization. Today, you will find it in dense stands in the state, especially near beaches.

They grow fast and tall, which makes these pesky trees shade out native plants that need sunlight.

Australian pine is an upright tree with a rough, fissured, dark gray bark. The needles are soft, long, and gray-green.

Another name for the tree is whistling pine; when the needles sway in the wind, they give off a noticeable and soft whistle.

Bishopwood is native to tropical Asia and the Pacific Islands. It arrived in Florida in 1947 for ornamental landscape use, especially street landscaping.

Nowadays, you will find it invading intact cypress domes and the state’s hardwood hammocks, displacing the native vegetation.

Bishopwood is an evergreen tree. It produces tiny greenish-yellow flowers without petals.

These flowers turn into countless fruits that hang in grapelike clusters, which attract birds. The birds then spread the seeds.

The Florida Exotic Pest Plant Council lists bishopwood as a Category I invasive species because of its keen ability to invade and displace communities of native plants.

Native to Brazil, Surinam cherry arrived in South Florida over 90 years ago. It was a popular ornamental tree because of its shiny leaves and brightly colored edible fruits.

The evergreen multi-branch small tree or shrub bears fragrant white flowers in the spring and occasionally in the fall.

The fleshy fruit range can be anywhere from very tart to sweet. Birds and mammals are attracted to this edible fruit. Sadly, their droppings are the source of this tree’s spread.

Surinam cherry invades hammocks in central and southern Florida, forming dense thickets. The University of Florida categorizes the small tree as invasive in South Florida and a species of caution for the rest of the state.

All the above invasive trees have a few things in common: they’re all fast-growing, adaptable to various soil conditions, and are aggressive reproducers. For example, bishopwood and camphor trees produce thousands of seeds each year, germinating easily.

Invasive trees outcompete native trees for soil nutrients, sunlight, water, and other resources. Because of their fast and ruthless growth rate, they overtake an area within a few years.

Sadly, some spots take over our precious habits for endangered species, like the Australian pine, which is ruining the habitat for endangered sea turtles and the threatened American alligator.

These trees are sometimes challenging to eliminate as their root systems can be strong. So, if you’re concerned about the potential impact of these trees on your property or the environment, it’s crucial to know how to identify them.