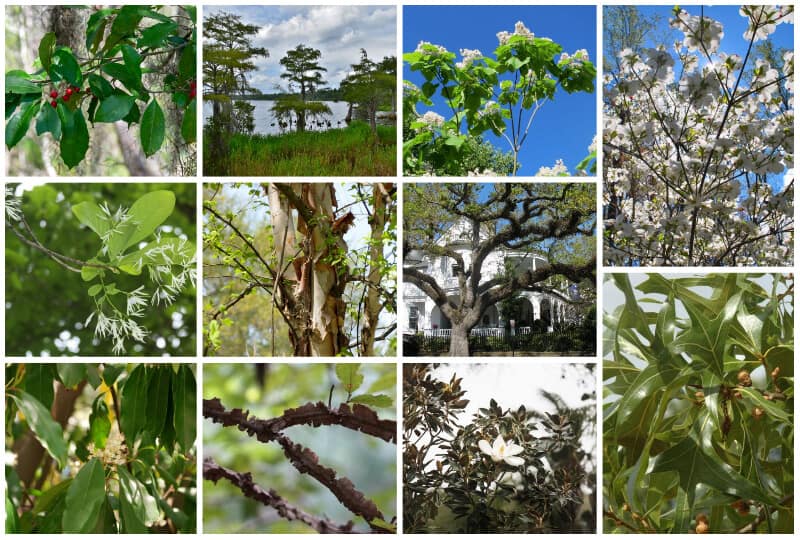 The north Florida hardiness zones span 8a, 8b, and 9a. Major cities include Pensacola, Tallahassee, Gainesville, and Jacksonville.

Lets take a look at eleven trees that thrive in North Florida!

It is hard sometimes to believe that this beautiful ornamental tree that graces landscapes throughout the country is a common sight in the north Florida woods. The Lady Bird Johnson Wildflower Center refers to this tree as the most spectacular of the natives.

In north Florida, you will find it growing near streams, riverbanks, and shaded woods. But also in dry uplands.

The aesthetic reasons for planting flowering dogwood are obvious. But did you know that the flowers attract butterflies and birds adore eating the red fruits?

Flowering dogwood does best in rich, well-drained, and acidic soil. But it will also tolerate sandy and sandy loam soils.

Like flowering dogwood, this is another stunning beauty common in ornamental landscapes and the wild. The extra-large, creamy white, and lemony sweet flowers delight during the summer months.

You can find these evergreen flowering trees in the lowland forests throughout north and central Florida. They tend to thrive near the edges of water and swamps.

Southern magnolia is excellent as a specimen or shade tree. In Florida, you can plant it in full sun or partial shade. Though, the thick leather green leaves are lusher in partial shade.

Southern magnolia thrives in acidic, moist, loamy, sandy, and clay soils. But the soil should be well-draining. Also, it has some flood and drought tolerance.

Fringe tree drooping clusters of fragrant white blossoms in the spring. After that, the tree has grape-like clusters of blue-black berries. These fruits attract birds and small mammals.

Fringe trees grow on the savannas and lowlands of north and central Florida. The most common habitat for these trees is moist hammocks. But its range is broad – reaching New Jersey to the north and Texas to the west.

According to the Florida Native Plant Society, the trees are already under threat from the emerald ash borer in the northeast, and it would be lethal for the native fringe tree if the pests reach Florida.

Fringe trees do well in full sun or partial shade. It does best in moderate soil moisture.

Average Size at Maturity:  12 – 20 feet tall with an equal spread

Catalpa is native to a small region in the southeastern United States – including the upper half of the Florida peninsula. But because the tree is so easy to grow, it has naturalized well beyond the native range.

Catalpa is a common ornamental tree. This is because of its large, showy clusters of flowers. It has by far some of the showiest flowers of trees native to the United States.

Catalpa grows very quickly. If you decide to plant one, you should provide it with moist soil and full sun. These conditions best mimic its natural habitat.

Carolina cherry laurel is an attractive, fast-growing tree. It is native to the Florida panhandle. It grows in various habitats, such as fields, maritime forests, and low woods.

These trees offer tremendous ornamental value to the landscape. Due to the small tree’s dense canopy, it is a common hedge or small privacy tree in the southeastern United States.

These flowers are highly fragrant and are great for attracting pollinators to the garden. They are great at attracting a wide range of butterflies, such as eastern tiger swallowtail, red-spotted purple, spring azures, and coral hairstreak, among many others.

Carolina cherry laurel is one of the best trees for shady spots. But the trees also do well in full sun. For best growth, the soil should be fertile and well-draining.

There are many oak trees native to Florida. What makes turkey oak unique is that they grow in places where few other oaks grow, such as spots with poor, thin, dry, sandy, or rocky soils. They are a common sight along the coastal banks in North Florida.

While turkey oak does not have the attractive crown, you see in most oaks, it has a slenderer growth habit, and the foliage is not dense. But its leaves are deeply lobed and attractive. During the fall, the leaves change to a deep, bright red color.

Turkey oak is an excellent reforestation tree. But the trees also work well in woodland-themed landscapes. The trees work well as understories for pine trees.

Another exciting feature of turkey oak is the immense number of acorns they produce each year. These acorns are famous for attracting wildlife such as deer, squirrels, and turkeys.

Average Size at Maturity: 20 – 30 feet tall with a similar spread

Winged elm gets its name from the wing-like corky projections on opposite sides of its twigs and branches. The width of these “wings” varies from one tree to another.

The native Florida tree is excellent for urban plantings because it adapts well to pollution and is incredibly sturdy. Winged elm is common in parking lots throughout north and central Florida.

Winged elm does well in any soil type. Also, it can tolerate full sun or partial shade. Not only is this tree easy to maintain, but it is also a fast grower.

True to its name, river birch grows naturally along riverbanks. But for many aesthetic and practical reasons, it is a common landscape tree in most of the United States.

River birch offers fast growth, drought tolerance, resistance to birch borer, and tolerance of wet soils. In addition, it has one of the most beautiful and unique barks among trees—the cinnamon-colored bark curls and peels.

River birch is relatively low maintenance. It does well in either full sun or partial shade. Also, it is not fussy about soil type though it does best in moist yet well-draining ones.

American holly is popular during the Christmas season. Many people are surprised that this Christmas staple is native to Florida – the sunshine state. These trees grow under other large trees in moist forests or bottomlands.

American holly features glossy green leaves and bright red berries. These aesthetic aspects make these trees some of the most sought-after ornamental trees for specimen plantings and privacy screens.

You can plant American holly in full sun to partial shade. Though in Florida, I would lean towards partial shade because of the oppressive summer sun. The best soil type for these trees is moist, well-drained, and acidic. These soil conditions are similar to the tree’s experience in the wild.

Due to these specific care requirements, I recommend planting American holly under other large trees in a moist spot with lots of organic material, such as fallen leaves or mulch.

The bald cypress is one of the most common trees in the Florida swamps. The deciduous conifer grows in various soil types – salty, wet, and dry.

But the bald cypress is not just a swamp tree. Its stately pyramidal shape and lacy needles make it a remarkable landscape tree. Also, it has a dense canopy which is great for shade. In fall, the soft feather-like needles turn to a reddish or orangish brown color before falling.

Bald cypress is great in sunny spots. These trees grow about a foot to two feet each year.

No list of impressive native Florida trees is complete without the southern live oak. This is a large and sprawling oak tree. You can find it throughout north Florida – forests, fields, neighborhoods, and old plantations.

Southern live oak sheds its leaves for a very short period before sending out new ones. Another perk of growing this tree is its powerful wind resistance, which is necessary for hurricane-prone Florida.

These live very long. You can expect it to live for hundreds of years. In addition, southern live oak has remarkable salt, drought, pest, and disease resistance. All of which makes it one of the easiest trees to maintain.

Southern live oak is best for yards with plenty of space because of its wide-reaching spread. However, it may take a couple of decades to reach anywhere near its mature size.

Native trees tend not to require much maintenance. On that same note, this makes them great at saving water, which saves time, money, and effort.

In addition, native trees are lovely for supporting native wildlife. They provide valuable food sources for various birds, pollinators, mammals, etc. A significant example is turkey oak, which produces tons of acorns. Also, the berries from cherry laurel and American holly are invaluable to birds and small mammals.

It is always a great idea to incorporate native trees into your landscape. The National Audubon Society lists many other reasons for doing so.

The fantastic thing about North Florida native trees is that many are highly attractive. Examples include southern magnolia and flowering dogwood. Planting these ornamental trees makes your landscape look stunning, and the decision is also good for the environment.