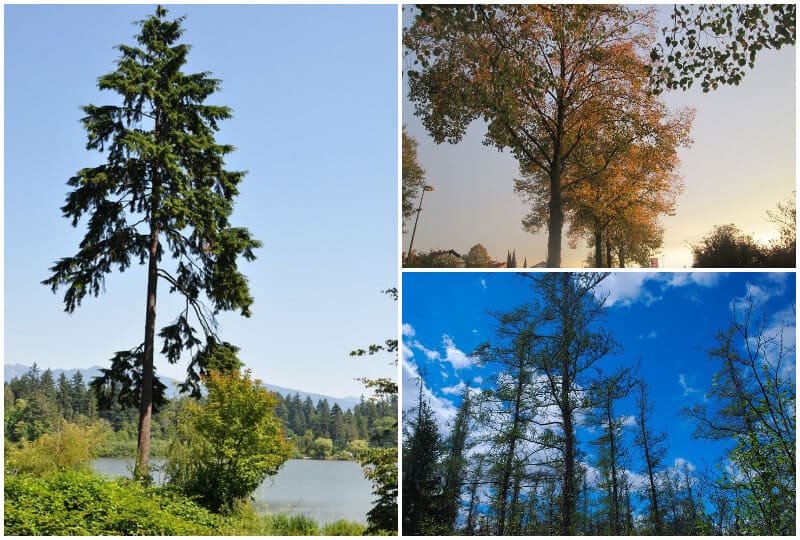 Alaska is not all ice, glaciers and tundra devoid of tree life. In fact, the state of Alaska is surprisingly diverse when it comes to different climate zones.

Whilst you will find chilly zone 1 in parts of the state, it comes as a surprise to many that there are warmer and wetter zones reaching zone 8b in southeastern areas.

Whilst growing anything in Alaska comes with its own sets of challenges, there are probably more options than you imagine.

10 Trees To Grow In Alaska

The Western Hemlock is a large evergreen tree with a conical habit, and elegantly spreading branches. It has short, dark green needles that are flattened, and have a white stripe on the underside. The Western Hemlock is an Alaskan native and as such is naturally well adapted to the challenges of growing in AK.

In forestry terms, it’s a pioneer in many zones as well as climax dominant species in other areas too.

According to the USDA, it’s the dominant species in British Columbia and Alaska along the Coast Mountains and the coastal islands.

Western Hemlock thrives in areas where there’s fog and precipitation during the growing season, in a mild, humid climate. It produces slender, cylindrical cones about 1-3” long with a thin and flexible scale.

It’s a shade-tolerant tree as it will often be found growing in the shade of other conifers such as the Sitka Spruce or Douglas Fir.

Western Hemlock is most reliably grown in wetter regions of its native range and is fast-growing, and tolerant of moist or dry soils. It’s definitely a large tree, so will not be suited for those lacking space.

Flowering Season: Late May and June

Tamarack is a conical, slender-trunked tree with deciduous, bright green needles. The needles have a certain glossiness about them and appear in soft tufts in the early spring.

The thin, tapering trunk leads to an opening crown with horizontal spreading branches. Autumn sees the needles change color to a shade of yellow before being shed.

At the treeline, the tamarack remains as a small shrub. It’s one of the most northerly trees, and as such is useful as an ornamental in very cold environments.

The durable lumber has many uses; from house frames to railway crossties. Watch out for the larch sawfly, which defoliates the bark and can cause damage or death.

The Amur Chokecherry is a vigorous tree with an oval to rounded crown and is hardy down to zones 2. Winter interest is provided by the bark which flakes off in an unusual bronze/copper/yellow color. The leaves are oval to narrow oval with a pointed top, finely serrated edges, and are bright green.

Small bunches of fragrant white flowers appear around April. Whilst the tree doesn’t produce an abundance of flowers, AK gardeners will no doubt welcome their appearance after the long winters. The flowers are followed by small, black fruit. The blossoms are good at attracting pollinators, and the fruit is eaten by some birds.

The Amur Chokeberry will grow in clay, loamy, sandy, or calcareous soil, and won’t tolerate wet soil. It tolerates partial shade, but will do best in full sun. One drawback of the Amur Chokeberry is its susceptibility to black knot disease.

The Mayday tree is a scented, flowering tree and an important food source for many birds. It has ascending branches and a rounded shape. It has a rough, gray to black bark.

The leaves are obovate to elliptic, with 5 sharp teeth at the margin. The tip is abruptly pointed, and the color is dull green on top and a grayish tone on the underside. Fall sees the leaves change to a gold/yellow color.

The flowers are white and fragrant, and twice as long as the stamens. The black globulous fruit, whilst too bitter for humans are thoroughly enjoyed by birds. Plant in either full sun or shade. One downside is that they are susceptible to the disfiguring black knot disease.

If you’re wondering whether you can grow maples in AK, then the answer is yes you can! The Tatarian maple is native to central and southeastern Europe, as well as parts of Asia and Russia. This maple is a small tree or large shrub and is noted for its red-green samaras (winged seed cases) and the contrast this provides with the bright green foliage.

The samaras adorn the tree and are reminiscent of summer blooms. Spring heralds the appearance of clusters of pale yellow flowers just after the leaves. Fall sees the foliage turn yellow, orange, and red. Its relatively compact size makes it perfect for smaller yards.

The Tatarian Maple prefers moist, well-drained soil in a sheltered position, in either full sun or partial shade. Maintenance is easy as there’s little need to prune. Make sure to mulch well for optimal health.

The Paper Birch is a small to medium-sized tree, often with many stems. In the forests, they can be observed with a slender trunk that often curves before reaching its narrow, oval-shaped crown. Out of the forest environment in the open, the crown takes on a wider, open pyramidal crown.

The dark green leaves are triangle or egg-shaped, are doubly toothed and are paler with soft down on the underside. The flowers are either male or female catkins that stand erect at the end of the branch tips.

The male catkins are longer and hang below the branch tip, whilst the females appear before, or at the same time as the leaves. Its twigs are densely covered in resin glands.

The thin, white to reddish-brown bark has slight horizontal slits and provides year long interest. It peels off in papery strips to reveal a reddish-orange inner bark.

Paper birch has many uses and is an important food for many forms of wildlife including deer and moose. It’ll grow in a variety of soils but won’t tolerate shade.

The Sitka Mountain Ash is a native of Alaska and the Yukon Territory. In its native range, it’s often found in poor soils lacking in nitrogen, on avalanche prone areas, open forests, streambanks and clearings. Fall provides the greatest interest with this tree, as the foliage turns yellow/red/orange and the eye-catching fruit is on display.

The fruits are berry-like pomes, with an orange-red to pinkish hue, with a white or bluish bloom. The fruit remains on the tree until late in the winter, so makes it an important forage food for many forms of wildlife, including game birds, songbirds and many mammals.

The twigs and foliage are eaten by deer, elk and moose, and the black bears and grizzlies eat the leaves, berries and stems.

The littleleaf linden is a popular landscaping plant in many parts of the temperate world due to it’s resilience to a wide variety of different climatic conditions. It’ll grow in the southeast and southcentral areas of AK, as it’s hardy down to zone 3. The heart-shaped leaves of the littleleaf linden are smaller than that of Tilia americana.

The canopy remains pyramidal and formal when young, and rounds with age. The small, fragrant flowers attract bees and other pollinators. The littleaf linden will tolerate a wide variety of soil ph but grows best in well-drained soils. It’s tolerance of pollution make it a good choice for urban planting as a street tree.

The Swedish Columnar Aspen is a tall and narrow columnar tree that serves as a great accent in northern garden landscapes. It works as a screen or windbreak, and in prairie-type plantings, yet also looks good in urban environments. Its more tolerant of disease than the lombardy poplar.

Its tall and narrow form make it a popular choice for small spaces, lining a particular aspect of the landscape, or as tall screen.

The flat and round green leaves flutter and shake gently in the breeze, providing a calming visual and sonic effect for anyone lucky enough to observe them. The branching pattern is almost parallel to the trunk, adding a serene symmetry to the landscape.

The Swedish Columnar is a tough and adaptable tree and will tolerate a range of different soils and climates, making it a good addition to many gardens in AK.

The Manchurian Ash is a medium sized deciduous tree with a dense to oval/round crown. The leaves are pinnate compound and can grow 10-15” long, with each leaf having up to 11 nearly stalkless toothed, lance-shaped leaflets. The leaflets are matt-green and downy on both sides, with sunken veins.

Fall sees shows of yellow, and the flowers are non-showy, apetalous yellowish-green color on compact pannicles in the spring, before the emergence of the leaves. Manchurian Ash is dioecious, and female flowers give way to 1-2″ long, winged samaras which mature in August-October.

Alaska gives homeowners and gardeners abundant opportunities to cultivate a bountiful garden. Alaska is so much more than an icy wilderness, as many outsiders tend to think.

The range of Alaska’s growing zones; from 1 to 8b means there are plenty of different tree species and fruit trees for you to choose from to plant in your yard and break the icy barren wilderness stereotypes of the beautiful state of Alaska.