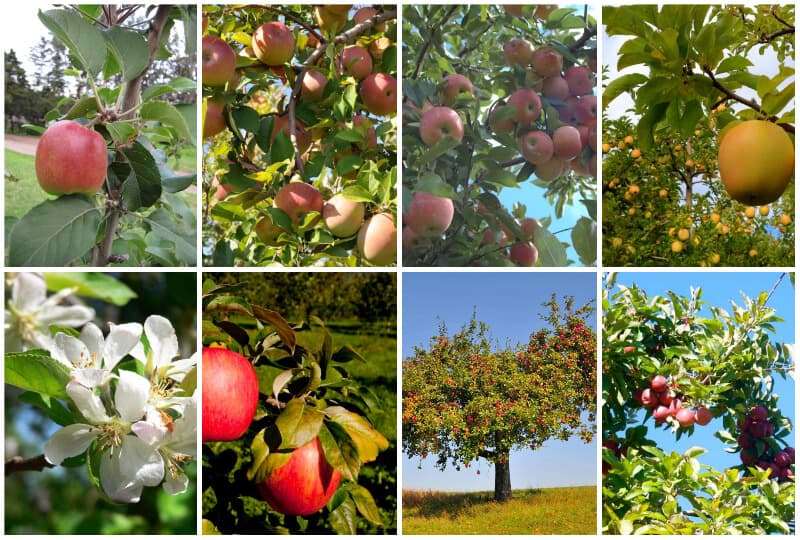 Apple trees are ideal fruit trees for Texas since they can be grown almost anywhere in the state! This is because these trees are pretty low-maintenance and can grow in very different climates, as long as the weather isn’t too extreme.

Of course Texas has its fair share of extreme weather, but generally apple trees can grow in every region of Texas. Texas includes USDA hardiness zones 6 through 10, so there’s quite a range of growing conditions in the state- but most apple trees are very adaptable!

There’s also a huge range of apple trees with some variation in where and how they like to grow. So, there are some that will do better in different parts of Texas.

Keep reading to see which apple varieties grow best in your region!

Pink Lady apples have a mild but sweet taste that almost everybody likes, one of the reasons why this cultivar is so popular. The fruits are firm and juicy, and can be eaten raw or cooked.

The apples are fairly large, usually several inches across, and have yellow-pink skin. This tree is a semi-dwarf variety, so even at its mature height harvesting and pruning is more manageable.

Pink Lady Apple trees need to be cross pollinated to bear fruit, so they need to be planted with other apple trees that bloom at the same season.

Pink Lady Apple trees are native to western Australia, which means they can tolerate hot summers in the U.S. These trees can grow anywhere in Texas and are a great pick for growers in southern TX.

Fuji apples are another really common type that you probably already know since they’re grown all over the country. Fuji Apple trees can grow in every part of Texas except for the very far south, where the temperatures are too hot to handle.

Fuji apples are crisp and juicy with a slightly sweet taste, hitting a nice balance between red and yellow apples. The fruits are medium-sized but when the tree is in full production mode, its branches get heavy with fruits and sag down.

Fuji is another semi-dwarf variety and semi-dwarf apple trees tend to fruit at a younger age than full-sized apple trees, which take longer to mature. Despite the tree being semi-dwarf, the fruits are still regular apple size!

These trees don’t handle frost well and will do best in the southern half of TX, but they still grow well in northern TX as long as the winters aren’t very harsh.

Dorsett Golden Apple trees are early bloomers, which has two benefits: they’re one of the first trees to flower in early spring; then their apples ripen by late June or July. There aren’t many apple trees that give you fruits in the summer!

What’s even better is that these apples taste like fall apples, they just come a few months early! Summer apples are often more bitter than fall apples, but Dorsett Golden has the same sweet, juicy flavor of fall apples that we know well.

Dorsett Golden is a great choice for Texas gardeners because it has low chill hour requirements and a high heat tolerance. This type is especially sun-loving so it’s ideal for southern TX, but it can be grown anywhere in Texas!

You’ll need to plant a Dorsett Golden with another summer variety so they can cross-pollinate, because it’s not self-fertile.

Golden Delicious is one of the most popular apple varieties in the U.S. because it’s very sweet and has lots of juice- making it ideal for desserts. Although they can be eaten right off the tree too, which is a sweet snack in fall as the temperatures get lower.

Golden Delicious is another heat-tolerant variety that grows well even in southern TX with intense summers. It also doesn’t need much water, but it isn’t completely drought-tolerant. You’ll need to water your Golden Delicious during dry periods but otherwise it’s fine on its own.

These trees are one of the few apple trees that is self-fertile, so you only need one! Since it’s a semi-dwarf kind, you can easily plant one even if you have a smaller yard.

You probably also know Gala apples, since they’re another common variety of apple all over the country. Gala apples are darker but aren’t full red apples and have a crisp, slightly tart flavor.

Gala Apple trees produce fruit in late summer to fall, fruiting earlier in cooler climates. These trees are partially self-fertile, but they will have a much greater yield when planted with other fall apple trees.

Gala Apple trees are native to New Zealand but grow really well in the U.S. and can be grown in any part of Texas as long as they’re grown in nutritious soil.

They’re generally very easy trees to grow and just need to be pruned yearly. Gala Apple is another semi-dwarf variety that can be planted in smaller yards or even in a container.

Gravenstein apples aren’t as common as the others I’ve listed, but they grow in almost every part of the country and are still one of the most popular varieties of apple for the U.S.

These apples have a unique look with yellow skin covered in thin red stripes, and are very crisp, juicy, and semi-sweet.

Gravenstein Apple trees are one of the most cold hardy varieties and are a perfect choice for gardeners in northern TX, even in areas with harsh winters. These trees have a strong tolerance for frost and will still be healthy as long as they receive lots of sun.

Gravenstein Apple trees are not self-fertile but unlike most apple trees, they need two different pollination partners to bear fruit. This is something to keep in mind if you don’t have much space nor the ability to prune and care for three different apple trees!

Honeycrisp Apple trees are a cultivar bred by the University of Minnesota to be cold hardy and resilient trees- and to have delicious fruits!

Another benefit of this selective breeding is that the apples have a long storage life and can be stored in a cool space for several months. Honeycrisp apples are yellow-pink, showing how they’re a perfect hybrid of yellow and red apples.

These apples are one of my personal favorite varieties for their sweet but fresh flavor- with a sweetness like honey- and lots of juice. Honeycrisp apples are also pretty big, usually 0.5 to 1 lb, sometimes more!

Red Delicious apples are the classic red apples that you’re likely already familiar with. They’re the most popular variety of red apple since they’re sweeter than most other red apples, but they’re not as juicy as many yellow apples.

Red Delicious apples have red skin but sometimes can be so dark that they look almost purple or black! The apples are normal-sized but the harvest of these trees is consistently very large.

These trees were cultivated in Iowa in the late 1800s and have been a popular fruit ever since. Along with the tasty fruits, the trees are highly disease resistant and very easy to grow.

All that Red Delicious Apple trees need to grow is full sun and well-draining soil. As with most apple trees, they also need a pollination partner that blooms at the same time.

Even though apple trees aren’t super popular in Texas and you might not think to plant one in your yard, they grow really well in Texas and most parts of the state are ideal growing conditions for these trees!

There are tons of cultivars of apple trees and most of them grow well down to zone 8 or 9, which is central TX. Unfortunately, there aren’t many varieties that can tolerate high temperatures and can be grown in southern TX, but there are a few!

And did you know that apple trees are also regarded as amazing flowering trees?! All apple trees bloom with beautiful, soft white flowers every spring, adding another benefit of growing apple trees.

For gardeners in central and northern TX, there are countless options of these excellent food producing trees that could grow very well in your garden or yard. The main thing you need to consider is which apple is the tastiest and are you ready to have full harvests for years to come!

Peyton considers trees not just as plants that provide shade or yummy fruits, but as necessary for a healthy life and community.

Peyton has done most of her research on environmental politics, but recently has shifted her focus towards actual agricultural practices, learning about ideas like agroforestry, food forests, and permaculture gardening.

She’s most often in the kitchen whipping something up, but otherwise can be found on long bike rides or doing research.