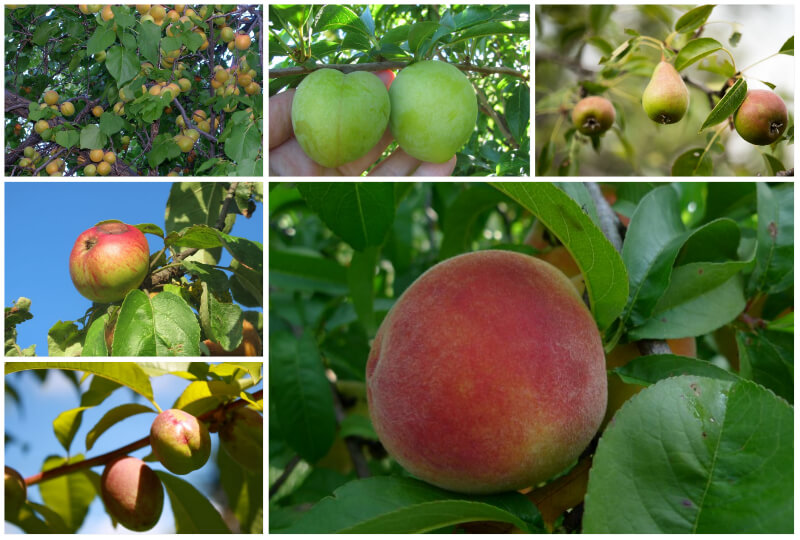 As you already know, Wyoming winters are bitterly cold with frequent cold fronts dropping temperatures to -20ºF and below.

The summers are generally warm, with afternoon temperatures between 80ºF and 90ºF throughout the state. Wyoming is also one of the driest states, with rainfall averaging less than 10 inches each year.

Considering the harsh climate, the best fruit trees and their respective varieties for Wyoming are drought-tolerant and cold-hardy.

Wyoming’s planting zones fall under hardiness zones 3 – 6. Most of the state’s residents live in zones 4 and 5. As such, there isn’t an abundance of fruit tree varieties to select.

However, you can choose from American staples such as apples, pears, and stone fruits. Also, the list below includes some surprises including a couple of native fruit trees and figs.

Apple trees do well in most of Wyoming. Many varieties are cold-hardy and moderately drought-tolerant. For stable production, they need an inch of water each week from May through October.

Apple trees produce the highest quality fruit with at least 8 hours of sunlight during the growing season. For a smaller yard, consider planting dwarf varieties which will take 2 to 3 years to bear fruit.

If you have plenty of space, you can choose standard-sized apple trees which take up to 8 years to produce. They also need a good pruning in late winter or early spring to ensure good form and robust growth.

Most standard-sized varieties are not self-pollinating. Which means they cannot produce fruits by themselves. They need another variety, blooming simultaneously, for successful pollination. Growers usually plant their apple trees with a crabapple which has a long flowering season – boosting the chance of cross-pollination.

Pear trees are one of the hardiest fruit trees on this list. You can plant them in almost every corner of Wyoming. The University of Wyoming Extension encourages the planting of six varieties that can tolerate the state’s dry and cold conditions (see list below).

When mature, most varieties of pear trees produce an abundance of fruits in a short window of time. It will take some patience as most trees will take at least three years to produce.

Compared to other fruits, caring for pear trees is straightforward, and they rarely suffer from diseases. They need fertilization just once a year if your soil is poor.

Pear trees require full sun to get the biggest harvests. Also,  they benefit from annual pruning to keep them healthy, upright, and productive. An inch of water during the growing season is recommended until the trees are well-established.

In Wyoming, apricots are a great choice because of the many cold-hardy varieties.

Apricots have a blushed orange color with unforgettable velvety skin. The flesh can be sweet or tart, depending on the variety.

Apricots bloom early; late frosts can destroy blooms and reduce harvests. Growers plant apricot trees towards the north as the cooler soil will delay flowering. Or, plant towards the east as the warming morning sun will melt frost quicker.

For a bountiful harvest, apricot trees require plenty of sunlight. They also need well-drained soil with plenty of organic matter. Adding a generous quantity of compost throughout the growing season boosts the soil quality.

Additionally, an abundant amount of mulch works well for moisture retention and winter protection. It would be best to give your apricot trees an inch of water weekly during blooming and fruiting to get a good harvest.

Flowering Season: Spring, the specific month depends on the variety.

Fruiting Season: Summer, the specific month depends on the variety.

Growing plum trees can be rewarding as fruits will fill every branch and limb of a healthy tree during the growing season. There are green, red, purple, and yellow plums with tart or sweet flesh. Plums are excellent fresh and make tasty jam, jellies, and preserves.

Plum trees need regular watering to produce flowers and a bountiful harvest. Growers should provide 10 gallons per 1-inch diameter of trunk every 7-10 days during the growing season.

Though a rewarding addition to any garden, you need to carefully select the variety if you plan to grow cherry trees in Wyoming. The University of Wyoming Extension recommends some sour, bush, and sweet varieties (see below).

Regarding care, cherry trees enjoy full sun exposure. They prefer well-drained, loamy, fertile, and moist soil. Due to Wyoming’s relatively drier climate, cherry trees need about an inch of water every week or two during the growing season. Cherry trees require heavy fertilization – twice a year until they begin fruiting.

Peach trees do better in temperate climates. Most varieties are enough for zone 5, which is only a small area of Wyoming.

The University of Wyoming Extension recommends planting ‘Contender’ as this variety does well in zone 4, covering most of the state. This variety produces medium-sized, freestone, red fruit.

Peach trees like sandy and well-draining soil, which is fine as much of this state have this. For larger and sweeter fruit, peach trees should get full sun exposure.

They will benefit from some organic mulch or compost around the tree’s base, keeping the soil rich and slightly acidic. Also, peach trees need annual pruning to remain robust and productive.

The greatest challenge in WY is that rainfall is sometimes not consistent enough for peach trees. Growers need to regularly water them during the first two years until they establish themselves and during dry spells and droughts.

The nectarine is a mutation of the peach. Fruits are hairless, smaller, redder, rounder, and sweeter than peaches. The pulp can be white or yellow, depending on the variety. Many fruit lovers report that nectarines are easier to eat and far tastier than peaches.

Nectarine trees are fast-growing. You will need to prune them annually to ensure strong trees and bountiful harvests.

Nectarine trees do not like severe cold. They will produce bigger and tastier fruit during hot summers. You cannot grow nectarine trees throughout Wyoming. They do best in the relatively milder regions (Zones 4 and 5), though trees will be safer in zone 5. It would help to wrap the trees in burlap during the winter to protect them.

Fruiting Season: Summer, the specific month depends on the variety

Mulberry is an excellent choice in Wyoming because of its cold hardiness. The variety, Morus alba ‘Kingan,’ is remarkably drought tolerant. In addition, they require no fertilization, adapt quickly to any soil, and strive in both full sun and partial shade conditions.

A mature mulberry tree reliably produces tons of small and sweet fruit in the summer. The fruits fall often and will stain any pavement.

Warning: Though not a fussy plant in terms of care, you should plant mulberry trees away from essential structures. The roots of a mature tree can damage your foundation, driveway, utility lines, and septic lines. You should avoid eating unripe fruit; they are mildly toxic to humans.

Fruiting Season: Summer, the specific month depends on the variety

In the United States, most of the fig tree cultivation is in the southwestern and southeastern states. Therefore, figs are a rare treat in Wyoming.

There are two hardy fig varieties that southeastern Wyoming residents can plant without fear. ‘Hardy Chicago’ produces bushels of sweet, light purple fruit that ripens in the late summer.

Also, this variety is slightly hardier and easier to find in nurseries. ‘Violette de Bordeaux’ provides fruit that is sweet, fragrant, and blackish purple with purple-red pulp.

As natives of the Mediterranean, figs love a sunny spot. Also, they require heavy mulch for winter protection. Below 10ºF, the stems will die back, and the roots can survive temperatures as low as -20ºF. Once the roots survive, the stems resprout in the spring and produce fruit on the new wood.

Fig trees are easy to grow. They are moderately drought tolerant, do not require fertilizing, and can produce fruit in the first year of planting.

Average Size at Maturity: 10 – 15 ft. tall with a similar spread

Chokecherry is probably the least popular fruit tree on this list. This deciduous tree is native to much of North America, including native to parts of Wyoming.

Chokecherry produces clusters of dense showy white flowers which turns into deep red, purple, or blackish fruit. The fruit tastes slightly bitter or tangy. It is best in preserves and jellies. However, one variety, Goertz, produces more tasty fruit.

Regarding care, chokecherry is not fussy. This resilient tree tolerates dry soil, wind, and bitter cold.

Wyoming residents are no strangers to wildlife. Chokecherry leaves and fruit will attract some furry guests. According to the University of Texas Austin’s Lady Bird Johnson Wildflower Center, large mammals such as bears, moose, coyotes, bighorn sheep, pronghorn, deer, and elk enjoy grazing on the leaves and twigs. Also, birds love the fruits.

Warning: The leaves, stems, and seeds are toxic to domesticated animals.

Average Size at Maturity: 20 – 30 ft. tall with a similar spread

Growers in the milder counties of southeastern Wyoming have many more options, and they should take advantage of that. Take, for example, fig trees; they usually grow in the world’s warmer regions. But there are some varieties, such as Chicago Hardy, which strive in this part of the state.

Growers in the colder zones 3 and 4 of the state can comfortably rely on apples, pears, and chokecherries.