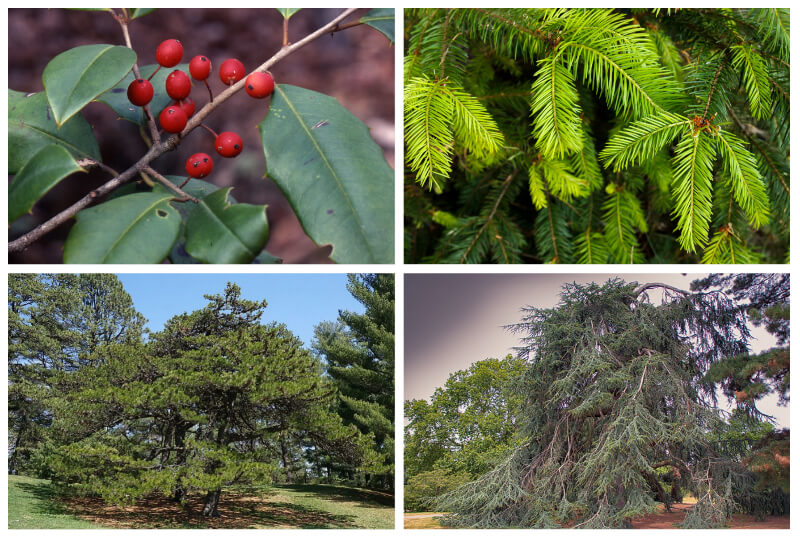 Evergreen trees are those that keep their leaves over the winter.

Whilst there are plenty of PA deciduous natives that will add winter interest in the form of bark and winter berries, there are also a whole array of native evergreen trees to choose from.

Whether you live in the colder northeast of the state or the balmier southwest, there’s a native evergreen to provide interest in the landscape, alongside habitat for native wildlife.

Whilst the eastern forest of the state tends to support deciduous forests so trees aren’t overburdened with the weight of heavy snow or overexposed to dry winter winds, there are several native evergreens that you can incorporate into a native garden landscape.

Let’s look at some evergreen trees you can find around PA.

11 Evergreen Trees You Can Find In PA

The most populous eastern conifer, the eastern red cedar is native in 37 states. Its success is due to its resistance to extremes of heat, drought, and cold. Eastern red cedars are aromatic, with a compact and narrow columnar crown when young. Their mature form can be quite irregular.

The scale-like foliage is the source of this tree’s aroma, which can be found in either light or dark green, blue-green, or grey-green during the growing season, and brown during the winter. Small light-blue/green flowers mature in late winter or early spring, forming a spherical blue fruit that matures in the fall on female trees.

Eastern red-cedars is also one of the best species you can plant for wildlife habitat. It’ll tolerate a wide range of soil types, but needs full sun.

Whilst the Eastern White Pine prefers well-drained, slightly acidic soils, they are more tolerant of different soil types than other native evergreen trees. Whilst it has value as an ornamental tree, like other large narrow-leaf species, it requires quite a lot of space to allow it to develop fully.

As a specimen plant, it adds a soft green texture to the landscape, with young trees being pyramidal and open in form. Maturity sees more prominent horizontal branching. The foliage consists of clusters of five needles, being the only pine native to PA with 5 needles per cluster.

Eastern white pines are valuable soft timber trees, are found in moist or dry woodlands throughout the state, and are often planted as ornamentals in large open spaces.

Many kinds of wildlife feed on the soft needles and seeds, with deer browsing the twigs. The preferred winter food of the porcupine is the inner bark.

The Atlantic cedar is frequently used as a specimen tree in PA, where space allows it. Young trees are usually stiff and erect, with a central leader and a pyramidal shape. Maturity sees them develop flatter top and horizontal branches.

It has a pleasing form throughout all stages of development. Flowers are small and inconspicuous, whilst cones are large; 3 inches long, and 2 inches in diameter, and are produced on the upper end of the stem.

For best growth, the Atlantic cedar should be planted in moist to well-drained soil that’s slightly acidic and in full sun. The popularity of this tree stems ( partly) from the color of the needles, which range from a deep silvery-blue to light-blue/green. They are produced in clusters on spurs on the stem

This evergreen can be single or multi-trunked, conical or columnar. Branches are flat and spreading that end with sprays of dark-green fragrant foliage, which turns a yellow-green to slight brown in the winter months.

It’s a resinous tree that produces an angled, buttressed trunk, often with a narrow conical crown with short spreading branches.

Thuja occidentalis was the first North American tree introduced into Europe, with one grown in Paris around 1536. The foliage and bark are high in vitamin C and have been used to make infusions in the past. They’re slow-growing trees, capable of reaching upwards of 400 years of age.

Today the wood has various commercial value, and the twigs are used to distill cedar oil. They can be planted as a specimen or a hedge, but are susceptible to strong winds, snow, and ice damage. Young plants will need protection from winter browsers.

It provides both food and cover for birds and is tolerant of heat and air pollution provided it’s in moist and cool soil.

Flowering Season: Monoecious flowers from April to May

There are many different kinds of Holly native to PA, but many are deciduous and not evergreen. American Holly is a small tree or shrub that can easily be identified by its alternately arranged, thick evergreen leaves with sharp spines on the tip and further spines along the edges.

Unisex flowers appear in May- June, and the familiar berry-like fruit which is red at maturity only appears on female flowers. The leaves of this species have been used to treat the flu, colds, measles, and pneumonia. As they are dioecious (male or female) you’ll need a male around if you want the females to bear fruit.

They do best in full sun to partial shade, require moist, well-drained soil for optimum growth, and will die in standing water.

American Holly is threatened in PA, due to the scarcity of their range. There are very few wild populations, estimated to be around 20 or fewer, which makes it very vulnerable to extirpation on a state and even national level.

The red pine tree’s natural range extends from the Upper Great Lakes through southern Canada, west to Manitoba. The red pine has been planted extensively outside of its native range in reforestation projects, landscaping, around buildings, and in parks.

As it ages, the crown becomes irregular and round-topped, with the lower limbs shedding, exposing the reddish bark.

It doesn’t do well in the shade of other trees, neither does it tolerate pollution well. Red pine needles form in groups of two and are 4 ½ to 6 ½ inches long. The needles last for about 4-5 years on the tree, then fall, accumulating a dense layer of acidic moisture-retaining mulch below.

Pine seeds need lots of direct sunlight of some intensity to grow, so often struggle to do so in the shade of their parents. It’s only after a fire or some other natural or unnatural disturbance that saplings have a real chance to grow. Songbirds, chipmunks, and mice feed on the seeds.

Flowering Season: A 2” long cone without prickles, that remains attached until the following year

Eastern hemlock is PA’s state tree and has many, versatile uses in the landscape, such as an accent plant or as a backdrop to smaller, flowering trees.

It’s pyramidal in all stages of development and can be treated as a screen or hedge with proper seasonal pruning. Left untouched, it has soft, pendulous branches that give it an open look.

The foliage is dark green on the upper side, with two white lines on the underside. The leaves are ¼ to ½ inch long, straight, and extend from the sides of the stems. The flowers are hard to spot and the cones are a mere 1 inch long and can be viewed in the winter when they hang below the branches.

Eastern hemlock requires moist, well-drained acidic soil, that doesn’t overly dry out during the summer months. Avoid planting in clay soils or windy locations. ‘Pendula’ is the only cultivar with outstanding landscape value, due to its pendulous growth habit.

Similar to American Holly (Ilex opaca) except that it is hardy only in the warmer areas of PA. When grouped together, they can make an effective screening plant. As a specimen, it is valued for the foliage texture and beauty of its fruit crop.

Its natural growth pattern is dense, compact, and round. A little pruning can turn easily turn it into an effective screen.

The rectangular individual leaves are about 2 to 3 ½ inches long, with three prominent spine-like teeth on each margin, with several more along the margin, and are a deep green color.

The fruit is similar to the American holly, with the exception that plants will produce fruit without the pollination of female flowers.

It requires the same growing conditions as American Holly (see above) with the exception that it is not wind-tolerant.

The douglas fir is a native of the pacific coast and can be grown in parts of PA. It can be planted as a stand-alone specimen or in a group planting alongside other narrow leaves. A douglas fir will attain a pyramidal shape if space allows it. The branches are stiff and mostly straight.

Maturity sees the tree open up and take on a more graceful look. The flowers aren’t particularly noteworthy, and the fruit are cones of about 3-4 inches in length and 1 ½ inches in diameter, with small leaf-like bracts emerging from under the scales.

Individual leaves are single needles, about 1 to 1 ½ inches long, appearing on both sides of the stem. Throughout the year Douglas Fir’s retain its bright shiny green color.

For optimal growth, they should be planted in full sun with slightly acidic soil, that’s well-drained and has access to moderate moisture year-round. They don’t do well in excessively dry areas.

Flowering Season: Catkins in April- May

The pitch pine is an evergreen with an irregular shape; often having gnarled or drooping branches, with a reddish-brown scaly bark that eventually turns black with age. Needles are in clusters of three and are stiff and yellow-green in appearance. The tufts of needles often appear on the trunk.

The pitch pine is a medium-sized tree with a rounded-irregular crown, of horizontal branches. Cones appear in clusters of 3-5. Now primarily used as a source of timber or pulpwood, the pitch pine used to be a source of resin, with colonists using it to produce turpentine.

The best location for this pine is on dry rocky soil; the kind of place that many other trees wouldn’t tolerate. The open exposure of its preferred growing location accounts for its open and irregular shape.

The pitch pine is resistant to fire. Its twigs, leaves, and seeds are an important wildlife food and the species has been used to reforest areas with bare, worn-out sandy soils.

Flowering Season: Small green flowers in March, April, and May

The table mountain pine is endemic to the Appalachian Mountains of the eastern united states. Its range is mostly in the Blue Ridge and Valley-and-Ridge provinces of the Appalachian Highlands, but also extends to central Pennsylvania and some specific areas of other states too.

They can often be found with straight to crooked trunks, with a rounded, irregular crown. The bark is grey-brown/red and is irregularly formed into scaly plates.

The needles form in bunches of two, or sometimes three, and are mild green to yellow/green in appearance. They persist on the tree for three years before being shed.

The epithet pungens refers to the prickly seed cones that are the hallmark of this species. They are naturally found at elevations of 1,500 to 4,300 feet above sea level and prefer to grow in dry, sandy, or shaly uplands. It attracts different species of birds, butterflies, moths, and mammals.

Fruiting Season: Fruit displays from September to November, and can persist for several years.

Evergreens are popular landscape choices to provide interest throughout the whole year, including the cold winter months.

PA is host to a variety of climates and as such, plenty of evergreen species can be grown, including the timeless interest of numerous pine trees, to festive winter fruit display different types of holly.

No matter if you’re in the colder northeast or warmer southwest of PA, there are numerous different types of evergreen species that you can choose to grow or admire in the landscape.