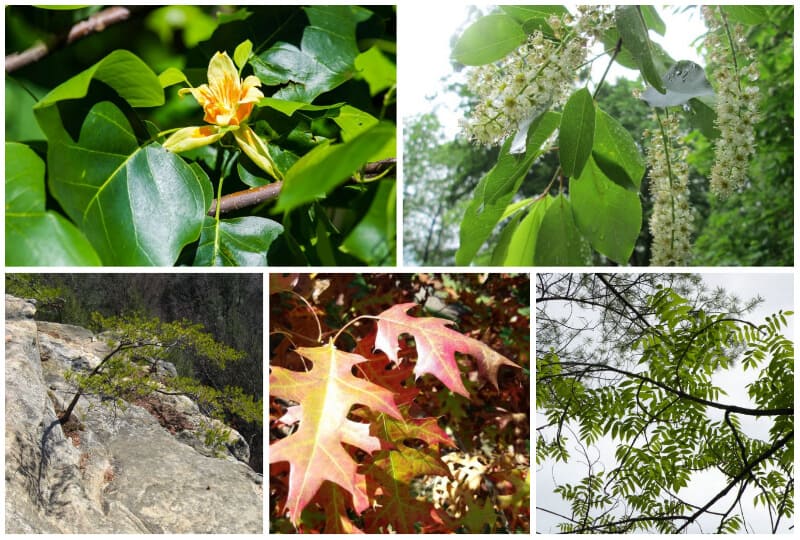 The most common forest type in West Virginia is the central hardwoods, which cover the western half of the state. You will find elms, maples, basswood, ash, sycamore, and poplar there.

The northern hardwood forest type dominates the highest elevations of the state. These forests have a cool climate and resemble those of the upper Midwest and New England.

Common broadleaf trees in this type include wild black cherry, beech, birches, and maples. Conifers such as black spruce and eastern hemlock are abundant in these forests.

The eastern ridge and valley sections of West Virginia have an oak-pine forest type with its relatively drier and sandier soils. In this forest type, you can find black, scarlet, and chestnut oaks and Virginia and white pines.

American elm grows in the central hardwood forests of WV, the state’s western half. The American elm grows naturally in various settings, notably fertile bottomlands, floodplains, stream banks, and marshy areas. It grows along rivers on higher-altitude terrains, like in the Appalachian Mountains.

At first glance, the tree has a vase-like shape with arching branches. The leaves alternate positions on the branch, meaning no two leaves are across from each other. They have an oval shape and are unequal at the base. In addition, these glossy dark green leaves have teeth along the edges.

On an exciting note, American elm leaves are valuable food for the larvae of a few butterfly and moth species. Examples include Eastern Comma (Polygonia comma), Question Mark (Polygonia interrogationis), and red-spotted purple (Limenitis arthemis), among others.

Black ash usually grows in bogs, along streams, or in poorly drained places that regularly flood.

It is a narrow tree, one of the slenderest trees in forests in North America, with a thin trunk that seldom grows wider than two feet. This tree has a long lifespan and can survive up to 250 years.

Black ash has male and female trees. Female trees produce samaras, which are tiny, winged seeds that mature in hanging clusters and can stay on the tree until the end of the growing season.

Black bears, foxes, and squirrels enjoy eating the seeds and game birds and songbirds like wood ducks, wild turkeys, and cardinals. Beavers love eating the tree’s timber and bark. It serves as a shelter for bats to give birth. Also, wood and tree frogs find refuge in black ash trees.

Average Size at Maturity:  40 – 60 feet tall with a similar spread

You can find eastern hemlocks on rock outcrops, particularly on slopes facing north. But they are most frequently found in cool coves. Due to their shallow root systems, hemlocks are vulnerable to windfall and drought.

This tree has 12-inch long, short, flat, blunt, flexible needles. The tips of the needles are round, pale silvery above and dark green underneath.

Like many other trees, Eastern Hemlocks experience changes in their bark as they age. The bark is relatively smooth and gray-brown when the tree is young. With age, the bark develops thick ridges that eventually flatten into cinnamon brown plates.

Eastern hemlock provides valuable food and shelter for many. Their dense stands are a habitat for more than 120 different species of mammals and birds.

The fall color of the scarlet oak is its most notable feature. The large and fast-growing tree is a member of the red oak family. It is found in various soil types in mixed woods but is most common on light sand and gravelly highland ridges and slopes.

The leaves on this tree are glossy deep green on top and paler green below. They turn scarlet red in the fall. The tree’s crown is open and rounded, providing dappled shade.

The leaves of this oak are 4 – 7 inches long and have 7 (rarely 9) narrow, bristle-tipped lobes separated by deep sinuses. Its acorns are ½–1 inch long and enclosed by a bowl-like, scaly cup. Every 3–5 years, the tree produces a large crop of acorns.

Silver maples are common in the central hardwood forests of WV. In particular, they grow in the wet soils of stream banks, flood plains, riverbanks, and swamps.

The lovely tree features 3 – 6-inch leaves with 5 lobes with pronouncedly deep, thin sinuses separating them. In the spring and summer, they are green on top and silvery below. In the fall, they turn to a pale-yellow color.

Early in the spring, the tree produces clusters of red, yellow, and silver flowers.

Squirrels consume the silver maple’s buds in the early spring. Ducks and other birds sometimes use it to lay their eggs. Also, beavers find the tree’s barks and branches tasty.

The Allegheny Mountains cast a rain shadow over the state’s eastern panhandle, which means it gets much less rainfall than western WV. Virginia pine is a tree that grows naturally in this relatively drier forest. It is fond of areas with rocky and barren soils.

Another name for Virginia pine is scrub pine because of its growth habit. Some Virginia pine trees look scrub-like and scraggly; the source of this appearance is the sterile soils from which they grow.

Virginia pine has short, two-bundled needles that range in length from one and a half to three inches, and its colors range from dark green to gray-green to yellow-green. The needles have a twisted form, just like scotch pine.

This tree also goes by the common name spruce pine because of the stiff, short look of the needles, which often stay on the twigs for three to four years. At maturity, Virginia pines have a leaning appearance.

One of North America’s tallest hardwood trees is the yellow poplar. The tree grows best in rich, deep soils, which are well. As such, they strive in forested bottomlands and on lower mountain slopes. The tulip-like blossoms appearing on yellow poplar trees in the springtime are typical to recognize them.

Yellow poplar’s leaves are also somewhat tulip shaped. They measure 4 to 6 inches in diameter and have four lobes and smooth margins.

Its fall foliage is attractive, ranging from bright yellow to red. In spring, the tree produces beautiful flowers on 4 – 6-inch-long racemes. Each raceme contains several dozen small, white, five-petaled flowers. Reddish-black “berries” (drupes) follow the flowers. They are a favorite among many species of birds.

You will find yellow birch growing on north-facing slopes, bogs, stream banks, and dense forests. Yellow birch grows especially near and around the WV’s Allegheny Mountains, the source of its scientific name. Its common name refers to the goldish color of the tree’s bark. The leaves turn a stunning yellow color in the fall.

Its bark peels off in thin strips and is silvery, goldish, or coppery in color. The oil-rich, papery bark can be peeled off and used as a fire starter even in rainy conditions because of its high flammability.

Deer, moose, and cottontails all eat the twigs, including whitetail deer. Deer consume a lot of young trees, and if the deer population is too high, it can prevent the species from regenerating. Ruffed grouse and various songbirds eat the seeds and blooms.

The Appalachian and Allegheny mountain ranges dominate West Virginia’s geography. Naturally, winter temperatures fall much lower in the higher elevations of the Mountain State, leading to a different forest type from the locations with a lower elevation.

West Virginia’s hardiness zones range from 5a to 7a. The central hardwood forests fall in zones 7a and 6b; it is also the state’s most populated region. Trees such as American elm, Black ash, Silver maple, and Yellow poplar dominate the wild in these forests. You will likely find these trees growing both in the wild and in landscapes in this region of WV.

The higher elevation areas tend to have more conifers than the west; one notable example is Eastern hemlock. In the drier eastern panhandle, pines and oaks dominate, including Virginia pine, which strives in the most inhospitable and rocky soils.