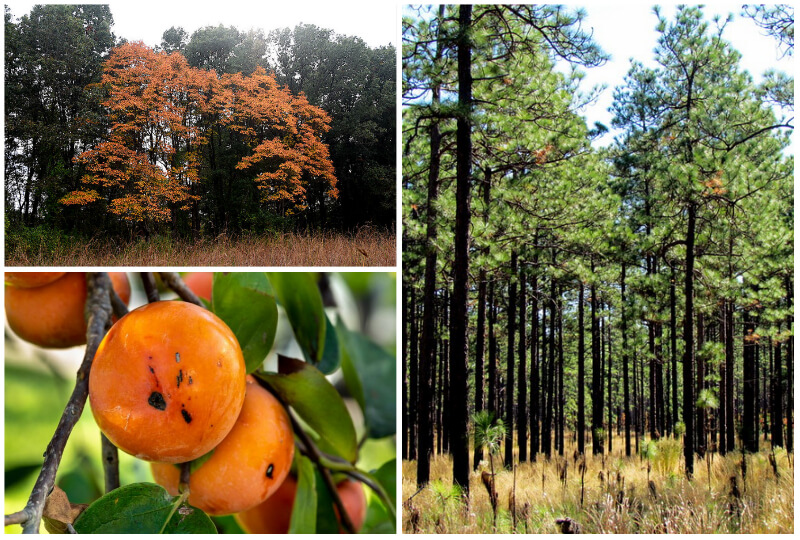 Alabama has always been covered by forest.

70% of the state remains under forest cover today, amounting to over 23 million acres.

According to the Encyclopedia of Alabama, the native forests are incredibly diverse, and there can be as many as 40 species per square meter.

Human settlement, agriculture, and modern forestry practices have all contributed to the changing landscape of AL’s forests, as has the exclusion of fire.

It’s estimated that 25% of Alabama’s native flora are at risk of extinction; do your bit by planting some native species in your yard.

8 Native Trees To Plant In Alabama

According to the Encyclopedia of Alabama, Longleaf pines were documented as covering most of the state at one point but now are almost entirely excluded apart from in small pockets. They used to extend across much of the Coastal Plain which covers most of the southern portion of the state.

Whilst there are still Longleaf pines in AL, the forest ecosystem they once supported is considered endangered. The Longleaf Pine is the state tree of AL.

The Longleaf pine is native to the Southeastern United States, from Virginia to Texas, and grows in a variety of soil types; from very dry to seasonally wet. Now they are only mostly found on the East Gulf Coastal Plain, and in the Appalachian foothills and Piedmont.

Longleaf pines are now one of the most important timber trees in the southeastern states and are used for lumber, pulpwood, and veneer. It has a rich past of numerous medicinal uses.

They’ll typically only grow a few inches in their first 2-10 years and remain in a tuft-like grass state whilst they develop their deep taproot. After this, they grow rapidly. Due to this and their mature size, they may be suited for those with large yards and lots of patience.

The eye-catching foliage of the sassafras tree is what makes it stand out from the rest. It’s a dense deciduous tree with an upright, pyramidal to irregular branching pattern, and tiered horizontal branches.

The leaves are three-lobed, mitten-shaped, and about 4-7” long. They’re bright green in the summer and turn shocking shades of yellow, orange, and red in the fall.

Small yellow flowers appear on the ends of the branches before or at the same time as the leaves. Sassafras as dioecious with separate male and female trees.

Pollinated female flowers give way to small, hanging clusters of dark-blue berries which hang off a red stalk and mature in early fall. The twigs have a pleasant, spicy aroma.

The bark is deeply ridged and furrowed and is a dark brown, cinnamon color. Sassafras spreads by root suckers so can create a small grove, however, it can easily be controlled and trained into a single specimen tree. It’s an important food source for many birds and small mammals.

The Osage orange is a distinct-looking tree, with its wrinkled light green fruit that somewhat resembles a brain. Despite no relation to the citrus family, the osage orange gets its common name from the faint citrusy aroma of the fruit’s flesh.

The tree also possesses thick thorns making it a good deterrent for intruders. It was commonly planted in thick hedgerows for this purpose in the eastern states until the advent of barbed wire largely put a stop to this practice.

The Osage orange is dioecious and has small, green flowers with little decorative importance. They are wind-pollinated.

Osage oranges are easily grown from seed or cuttings. They can tolerate dry, wet, poor, or clay soils. They are tough native trees that require little fuss. Provide them with well-drained soil and adequate water in full sun and they’ll thrive.

The seeds are a favorite food of squirrels and are can also be eaten by humans, although few bother. The fruit is also routinely fed to livestock.

Virginian witch hazel is an erect, small tree or shrub noted for the sweet aroma of its brightly colored fall flowers. Each flower is a collection of 4 golden-colored, twisted ribbon-like petals and has a spicy aroma.

They are clustered on the arching and irregular branches and appear at odd times, sometimes remaining on the tree until December. The leaves of the witch hazel are broadly oval, and emerge light green, before turning a darker shade upon maturity, before turning yellow in the fall.

The gray bark, fall foliage, and odd flowering times make the Witch Hazel an interesting addition to any garden landscape. It can be grown in full sun or full shade, in average, dry to moist well-drained soil. It prefers slightly acidic soils rich in organic matter and has some tolerance for clay soils.

In its native range, the Virginian Witch Hazel is found in the shade along streams, where it often has an open form with poor branching. Under cultivation, it’ll provide a fuller and more round crown. It’s generally pest-free, but suckers should be removed to stop spreading.

If you have plenty of space and are after a massive native nut tree, then consider planting a Hardy Pecan. They are deciduous trees with large spreading crowns, of luminous, dark-olive green leaves which turn yellow/brown in the fall.

Spring sees the emergence of inconspicuous green/yellow flowers. The male flowers are pendulous catkins and the female are squat spikes.

The nuts are edible and have a somewhat sweet taste. The hardy pecan is a great shade tree for large properties. If you plan on growing for nut production, plant two different varieties for cross-pollination to ensure a better harvest.

The black cherry is a large native deciduous fruit tree with a pyramidal to conical habit in youth, maturing to a more rounded shape with spreading, arching branches. The branches are covered in glossy green, oblong, and finely serrated 5” long foliage which turns bright yellow/golden/red in the fall.

Early spring to early summer sees an explosion of fragrant white flowers held in hanging clusters, reaching up to 6” in length emerging shortly after the leaves. Small rounded cherries mature to a dark black/purple color in the late summer.

Whilst somewhat bitter, they are enjoyed by birds and other wildlife or can be harvested for cooking or preserving.

The bark is dark and lustrous and provides winter interest. Black cherries are easy to grow and provide year-long interest; from blossom to foliage, fruit, bark, and shape.

The sourwood is a slow-growing deciduous tree with a pyramidal crown, slender trunk, and narrow oblong crown. The branches are often pendulous, with finely toothed, alternate dark green leaves, which turn a stunning crimson/purple in the fall. The common name of the tree comes from the sour taste of the leaves.

The blossom attracts bees, and are followed by a silvery capsule that remains on the tree throughout the winter and contrasts wonderfully against the red foliage.

The sourwood works well as a specimen tree, a lawn, or a patio tree and is good for naturalizing acidic soils. It grows best in moist, organically rich well-drained soils in full sun to partial shade and is mildly salt tolerant

Other Common Names: Lilly of the Valley

The American persimmon is a deciduous native fruit tree with pendulous branches and a spreading crown, with glossy green, leathery oval leaves. Fall sees the foliage turn a shade of red/purple/yellow/pink. Late spring/early summer sees the emergence of fragrant, bell-shaped flowers nestled amongst the foliage.

This is followed by orange, edible fruit 2” across that ripen in the fall to an orange/red/purple color.

The fruit can remain on the tree for weeks and attract lots of wildlife. When ripe the fruit is sweet and can be eaten raw or made into innumerable preparations. Unripe, the fruit is unpalatably astringent. When the fruit and foliage are gone, you can admire the dark, almost black furrowed bark.

The American persimmon makes a superb specimen tree, for its ability to attract wildlife, fruit, and overall attractiveness.

It’s easily grown in AL in average, to dry, or medium well-drained soils in full sun or partial shade and will even tolerate clay or dry soils. Upon maturity, the American persimmon is drought tolerant.

Alabama’s past is intricately linked to forested landscapes. Modernization has striped most of this once densely forested land and with it the ecosystems they once supported.

Planting native trees is a good way to give back to the place where you are, and honor the history of the landscape that was there long before you arrived, and hopefully will remain after you’ve gone.

It pays to check your planting zones in Alabama before planting anything to ensure the tree or plant suits your climate, thus giving it the very best start possible.