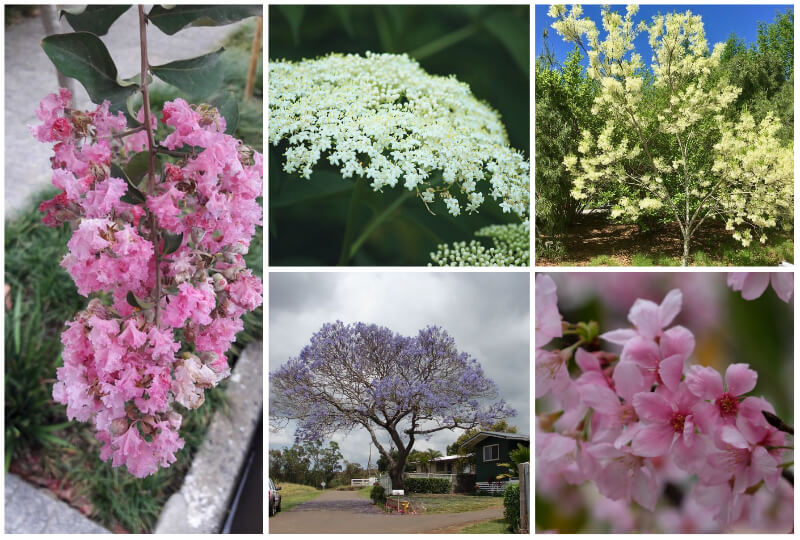 The mild winters of Alabama mean the state is carpeted with flowering trees that can bring life, color, and flourish to the landscape.

From the mountains of the north to the coastal plains in the south of the state, Alabama offers home gardeners the option to grow a dizzying array of different flowering species to bring joy, provide shelter, habitat, and food for pollinators.

With that in mind let’s look at some flowering trees you can grow in Alabama’s planting zones.

12 Flowering Trees To Grow In Alabama

Flowering dogwood is often considered one of the most spectacular of the native flowering trees. There are more than 100 cultivars of flowering dogwood, and 20-30 of those are commonly grown in the southeast.

Flowering Dogwood is a single or multi-trunked tree or shrub with a low trunk and almost horizontal, spreading branches.

It has a rounded or mostly pyramidal crown, with long-lasting pink or white blossoms. The flowering dogwood is deciduous, and the ovate foliage turns a pretty shade of purple/scarlet in the fall.

The flowers are small in size and are encased in pink bracts. It prefers to grow in soils rich in organic matter in part-shade. Being hardy down to 15 Fahrenheit, it’s suitable for the whole of AL.

Common throughout the southeastern states and Alabama, the tulip tree can grow up to 200 ft tall and live up to 300 years in the wild.

The tulip tree gets its name from its tulip-shaped leaves, has greenish-yellow flowers, and is the state tree of Kentucky, Tennessee, and Indiana. It’s one of the tallest broadleaf trees in the Eastern United States.

Tulip trees can be planted as shade trees, as they can reach soaring heights. They can be planted in a wide range of conditions; from the heat of the south to the subzero winters of New England, provided they have well-drained soil.

Tulip trees typically don’t bloom for their first 15 years, but after that will often continue to flower for the rest of their lives. So if you’re after a tree that will flower rapidly, then the tulip tree may not be for you.

The blooms are 2 inches wide, yellowish-green at the petal tips, turning a dark orange at the center.

A Jacaranda in bloom is a sight to behold. This native to subtropical areas of Brazil, Bolivia, and Argentina is a fast-growing flowering tree with a round crown and wide-spreading branches. The foliage is bright green, and soft and feathery.

The flowers are produced on 8-inch long clusters and are trumpet-shaped, lavender-blue/violet, and white on the insides. Jacaranda prefers moist, well-drained, sandy soil in full sun. They do get quite large so will not be suited for smaller yards

Native to southern China and Taiwan, the Taiwan cherry is a medium-small deciduous tree. The bark is an attractive reddish-brown color that provides winter interest, and the leaves are dark green and change a reddish-bronze color in the fall.

Bright pink flowers burst through from the naked branches in the spring. The flowers give way to small red fruit that attracts songbirds. The Taiwan cherry prefers acidic, well-drained soil and should be planted in full sun for best results.

Flowering Season: One of the earliest cherries to bloom; as early as late winter or early spring

The American Fringe tree is native to the eastern United States and is a small deciduous tree with a rounded, spreading crown. The foliage turns a shade of yellow in the fall. The flowers are fringe-shaped and are usually creamy-white.

The flowers give way to small, olive-like fruit that’s bluish/black which provides a food source for many birds and other wildlife. The fringe tree grows best in fertile, moist, well-drained soil, in either full sun or partial shade.

Their compact size makes them suited for smaller yards, and those looking for easy-to-grow native flowering trees to grow in AL.

American Elderberry is a woody, deciduous small tree or shrub native to the United States, Canada, Venezuela, and Brazil. In the wild, it can be found along streams, in marshlands, and moist forests.

Whilst the American elderberry prefers slightly acidic soil in full sun to partial shade, it can tolerate a wide range of environments, from wet to dry soils.

Summer sees the appearance of small white flowers in dense clusters. A purple-black drupe follows the flowers, maturing in late summer to fall, and is edible. Wildlife are fond of the fruit and the arching branches provide habitat for nesting birds.

The American elderberry spreads by root suckers and will form thickets if you don’t remove them. It’s a good choice for those looking for a small-sized tree that attracts pollinators and also produces a harvest.

The Japanese snowbell is a delightful small tree, whose bell-shaped flowers drip down from its horizontal branches in the summer. The foliage is dark green, turning dark red in the fall. The crown is broad and the tree works well placed close to a patio or in smaller places.

The leaves tend to vary a great deal in shape and size; from ovate, to elongated ovate, to diamond-shaped. The flowers hang off short narrow racemes in June and July and contain white and yellow stamens.

They are pleasantly fragrant and hence good at attracting bees and other pollinators to your garden. The flowers are followed by an ovoid, hard, grey/green drupe.

The Japanese Snowbell does best in rich, loamy, humic soil.

The crape myrtle is an extremely popular flowering species throughout Alabama. They produce multicolored, bulbous flowers throughout the summer and the spring. The sheer volume and weight of the flowers are enough to weigh down the branches, so for optimal health, you may have to cut them back periodically.

Dozens of crape myrtle varieties bloom in an array of different colors, such as pink, fuchsia, lavender, red, white, and violet. They can also range in size from 3 ft to 30 ft tall. Crape myrtles are generally pretty hardy but can be susceptible to fungus, frost and Japanese beetles, and the crape myrtle aphid.

Once established, they are extremely heat and drought tolerant, making them perfect for AL.

The Serviceberry is a small tree that provides year-round interest through its fall colors, abundant blooms, and berries. Spring brings in drooping clusters of five-petaled flowers before the foliage emerges. The common name of downy refers to the foliage which can be fuzzy when it first appears.

Early fall sees the dark green leaves turn red/orange/yellow. The small red fruits ripen in June and are popular with many different species of birds. The bark is smooth and gray with vertical stripes and provides visual interest long after the fruit and foliage have gone for the season.

The serviceberry is tolerant of pollution, and does best in moist well-drained acidic soil, in either full sun or partial shade.

The southern magnolia is an emblematic, broadleaf evergreen with large, fragrant showy white flowers that appear in late spring and early summer.

The leaves are 5-10 inches long, and a glossy green, with a deep rusty red tone on the underside. They have a slow-to-medium growth rate and can be expected to grow anywhere from less than 12” to 24” a year.

Southern magnolias grow best in moist, acidic, sandy, loam, and clay soils. They can tolerate some flooding and are moderately drought tolerant. The creamy white flowers can have a diameter of up to 12” and are fragrant. The flowers are followed by a 3–8″ long fruit that attracts birds.

The Southern magnolia has an oval, pyramidal shape, and a shallow, wide-spreading root system. Due to their size, they may be more suited to larger yards.

The Chaste tree is a native of Southern Europe and Central Asia and is an eye-catching multi-trunked small tree. Large, fragrant purple and lavender-colored flowers are produced on upright spike-shaped clusters and are attractive to butterflies, hummingbirds, and humans alike.

The trunk maintains a somewhat gnarled and knotted appearance, and the aromatic green leaves are divided into either 5 or 7 narrow leaflets. Chaste trees do best in moist, well-drained soil in full sun. They’re tolerant to drought, salt, and browsing, and won’t need much watering once established, making them perfect for xeric gardens.

If you’re looking for a tree that flowers all through the summer and requires little to no care, then the Chaste tree could be for you.

Varieties Suitable for Alabama: Purpurea is a purple-flowering variety

The Eastern Redbud is an eye-catching flowering tree. An explosive show of rosy-pink flowers appears in the early spring, sometimes directly on the trunk itself. They’re pollinated by blueberry and carpenter bees.

The heart-shaped leaves emerge after the flowers and are reddish-brown before turning dark green and yellow in the fall. They’re usually between 2-6 inches long.

The eastern redbud has an elegant and spreading crown and can grow in either full sun or partial shade, although partial shade in dry, windy conditions suit this species best.

It makes a good focal point in the landscape due to its irregular branching. 2-3 inch brown seed pods remain on the tree throughout the winter.

The early flowering of the redbud makes it an important source of nectar for many insects including early-season butterflies. Northern bobwhites, some songbirds, and chickadees eat the seeds.

The mild winters of Alabama give the home gardener a dizzying array of floral choices for their home gardens. No matter whether you’re in the warmer coastal southern portion of the state or closer to the Appalachian mountains, there’s no shortage of flowering tree species for you to choose from.

Not only can you add color and seasonal interest for yourself, but also provide food and shelter for wildlife; so get planting!