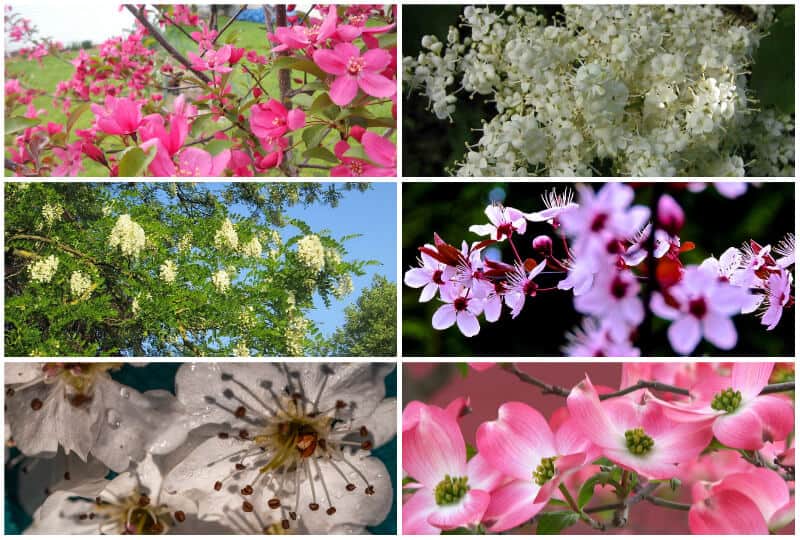 Flowering trees allow us to connect with the beauty of the natural world.

Flowering trees are not only beautiful but also serve as a valuable food source for pollinators, whose numbers are threatened nowadays by modern agricultural practices’ reliance on pesticides.

The state of CT extends from USDA growing zones 5b-7a, with most of the state in state 6, meaning that home gardeners have a wealth of flowering trees to choose from when it comes time to decide what to plant.

9 Flowering Trees To Grow or Admire in Connecticut

The Mimosa Tree is a popular ornamental tree in the home landscape as it’s easy and rewarding to grow. They are small to medium-sized deciduous trees that often grow in a vase shape with a spreading umbrella-like crown.

They have a feathery habit and pink/rosy aromatic puffy, bauble-like flowers that are extremely attractive to bees.

The leaves are bipinnate and compound 20” long with 10-25 pinnae, each with 40-60 tiny leaflets with a fern-like appearance. Flowers give way to bean-like pods up to 7” long.

The Mimosa tree is fast-growing and will thrive in soil with average moisture levels, in full sun to light shade, but best flowering will occur in full sun.

The Locust Tree is a fast-growing, flowering native tree with an irregular oval-to rounded crown. The bark is greyish/brown, rough, and deeply grooved.

The branches bear thorns and the leaves are dark bluish/green with 9-19 elliptical leaf segments. The Locust leaves late in the spring and doesn’t shed until late in the fall.

Pendulous clusters of fragrant, creamy white (sometimes pinkish) flowers appear in June and are followed by flat reddish-brown leathery seed pods with a winged side that often persist on the tree throughout the winter. The Locust Tree will grow well in lightly calcareous soil.

The Lilac Tree is a large shrub or small tree with an oval to rounded crown. The branches are erect, with lanceolate to ovate, sharply tipped dark-green leaves.

Summer sees the appearance of clusters, 6-12 inches long, of musk-scented, creamy white flowers which give way to lose seed capsules that persist into the winter. The exfoliating bark is reddish-brown and contains horizontal lenticels, similar to those of cherry trees.

The Eastern Redbud is native to eastern North America whose vibrant, attention-grabbing bloom mark the beginning of spring for many. It looks beautiful planted by itself or in groups where it provides a spectacular background.

Lilac/pink/magenta flowers burst forth from the trunk and bare branches before the emergence of the heart-shaped leaves. The leaves are held on long petioles, dance enchantingly in the breeze, and form a rounded crown that produces good shade in the summer months.

Fall sees the Eastern Redbud’s leaves change to a mellow shade of yellow, whilst purplish seed pods persist throughout the winter months.

They tend to grow in irregular and unique shapes, which lends them an immense architectural interest in the landscape, as well as a woodland effect when planted in groups.

Plant in full to partial shade for best flowering, in well-drained soil with average to good fertility.

The Pink Dogwood is an extremely popular flowering tree throughout the country, prized for the abundance of pastel-colored flowers it produces each spring for up to four weeks.

The green foliage turns purplish in the fall, providing interest after the bloom has passed. Reddish berries prove irresistible to butterflies and small birds.

The Pink Dogwood will grow best in well-drained slightly acidic soil. They are understory trees in the wild so will appreciate partial shade under cultivation, especially in hot areas.

Those in colder northern areas can grow Pink Dogwoods in full sun provided they are given sufficient water and are properly mulched.

The Cleveland Pear is a fast-growing ornamental flowering pear tree, favored for its symmetrical, rounded to oval crown and columnar to pyramidal shape. The shape of the Cleveland Pear lends elegant architectural lines to any landscape.

It’s also usually one of the first trees to burst into bloom in the spring months with a dizzying array of white blossoms in early spring.

The flowers are held on the edges of every branch and emit a crisp and delicate fragrance. The waxy leaves are dark green and contrast with the dark brown/grey bark throughout the season.

The columnar shape of the Cleveland Pear makes it suitable for smaller yards and spaces where other flowering trees may not fit.

The Cleveland Pear thrives in full sun in most soil types and will tolerate wet periods, heat as well as pollution. They prefer well-drained, humus-rich soil.

If the tree is planted near another Callery Pear for cross-pollination the flowers are followed by small rounded fruit which birds go crazy for.

The Thundercloud Plum is a popular upright, spreading deciduous ornamental which earns its place in the landscape whether flowering or not. It’s known as having one of the darkest leaves and twigs in temperate species.

The elliptic leaves emerge ruby red in the spring and turn dark purple/reddish in the summer. Single, white to pale pink flowers emerge from pink buds in mid-spring, cover the branches and fill the air with their enticing fragrance.

The leaves appear whilst the flowers are still open, creating splendid color contrast. These give way to small fruit that are feasted upon by birds and small mammals. The Thundercloud Plum will grow in full sun to partial shade in well-draining soil.

The bark is glossy and dark red and looks spectacular when the even branches are loaded with an abundance of early spring flowers.

The red buds open to bright pink, five-petaled flowers on bare branches and remain on the tree when the leaves emerge, forging a beautiful contrast.

The foliage emerges deep purple, and are smaller than most other crabapple cultivars. The leaves turn shades of orange before being shed.

The fruit are small cherry-shaped ornaments, that can remain on the tree from summer right until the next spring when they are eaten by migratory birds.

Prairiefire crabapples will grow in almost any well-drained soil and will even tolerate clay soil.

The Sweetbay Magnolia is an elegant flowering tree with an open canopy that’s immensely popular in suitable areas for obvious reasons. The fragrant flowers give way to showy cone-like fruit. It can be grown as a single, slender tree or as a multi-stemmed shrub.

The foliage consists of shiny green lanceolate leaves with a silvery underside that flickers if it catches the sun.

The cup-shaped flowers are lemon-scented and appear in mid-spring and throughout the summer. They feature 9-12 creamy white petals that open in the morning and close at night time.

The cone fruit that follows features prominent red seeds. The Sweetbay Magnolia is slow-growing and is well-suited to small spaces such as patios or smaller yards.

The majority of Connecticut sits in USDA growing zone 6 and offers home gardeners plenty of gorgeous flowering trees to choose from.

Whatever the characteristics you’re going for, there are a wealth of options to grace your yard with floral shows that will not only add beauty to your home but also keep native pollinator populations with a valuable food source.