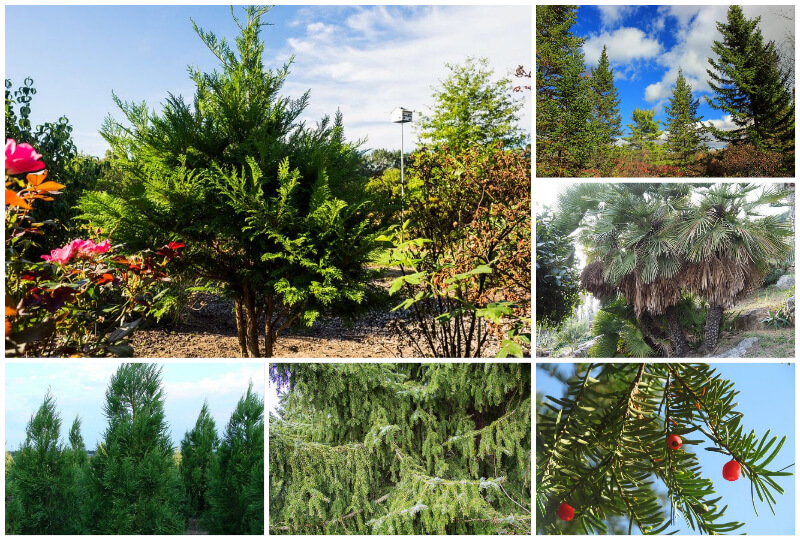 As evergreen trees don’t shed their leaves at any point in the year, they can provide a welcome sense of life in the dead of winter when everything else seems to be waiting for spring.

Connecticut experiences cold winters and as such evergreen trees can provide some visual respite.

There are many reasons for planting evergreen trees, including as a privacy screen, as a windbreak, for shade, as a hedge, or purely for the aesthetic appreciation of its natural form.

11 Evergreen Trees To Grow In CT

The Atlantic White Cedar is a dense columnar evergreen tree with ascending branches. The young leaves are green/blue and needle-like, whilst mature leaves become more scale-like. The branch tips produce an abundance of small cones and the reddish/brown fibrous bark is intersected with flat ridges.

It’s a CT native, whose range encompasses the narrow band of freshwater swamps from Maine down to Florida and west to Southern Mississippi.

The Eastern Hemlock is a straight trunked pyramidal tree with pendulous limbs and short-needled, flowing branches. The needles are dark green with a silvery underside. The Eastern Hemlock features a conical crown made up of slim horizontal branches, which can often hang down to the ground, whilst the leader is thin and often curved.

The Eastern Hemlock can be trained into a hedge, planted as a specimen, or function as a shade tree. Tea can also be made from the young twigs and branches. Plant in shade to partial shade in cool moist soil.

The Black Spruce is a narrow growing tree with very little spread. The needles are bluish green and have upturned branch tips on the end of the descending branches. The crown is irregular, open or conical and comprises of horizontal and drooping branches. At the timberline, it can be seen as a small shrub.

The Black Spruce is one of the most prominent conifers throughout North America. Heavy snows force the lower branches towards the ground where they take root, often forming a ring of trees around a parent plant. Grows best in wet/moist acidic soils.

The English Yew is a dioecious evergreen tree, usually with a pyramidal crown that becomes irregular with age. The bark is thin and scaly brown and the dark-green leaves are arranged spirally.

The cones are 3-6mm in diameter and shed pollen early in the spring. The seed cones feature a single seed covered by a soft and small red aril. The arils mature 6-9 months after pollination and are dispersed by birds.

The English Yew is native to Britain to Northern Iran, and Southern Scandinavia to Northern Africa, and is naturalized in the USA. Yews are heavily entwined in mythology and folklore and are considered to be a long-lived species with some specimens believed to be over 5000 years old. The English Yew can be distinguished from other conifers by the fact that it has red berries instead of cones.

The English Yew will grow best in shade and is often found as an understory tree. It’ll tolerate rocky and compacted soils, and will grow in most soil types provided they are well-draining.

The Eastern Red Cedar is an aromatic evergreen tree with a narrow compact columnar crown, sometimes broad and irregular with age. In youth, its form is pyramidal, whilst its mature form varies. The scale-like foliage is fragrant and ranges in color from grey-green, to blue-green to light or dark green.

All colors brown slightly in the winter months. The single trunk is covered by a silvery bark and pale blue fruit occurs on female plants.

The Pitch Pine has an irregular globular form with gnarled, often drooping branches. The bark is reddish-brown and scaly, eventually becoming black with age. The needles appear in clusters of 3 and are yellow/green, eventually turning dark green.

Needle clusters often appear on the trunk itself. Horizontal branches form a rounded, irregular crown of this medium-sized tree. Cones appear in groups of between 3 and 5.

The Pitch Pine is suitable for dry rocky soil where other species would struggle. It becomes broad and irregular when grown in exposed situations. Pitch Pines have been a useful species throughout the years, and have been cultivated for various useful properties of the tree.

The Japanese Cedar is a fast-growing evergreen tree with blue/green summer foliage and bronze/purple/green leaves in the winter.

It features a loose pyramidal shape and is a vigorous grower that can also be used for hedging or a green screening to block out unwanted noises or views. The Japanese Cedar is typical in Japanese-style plantings and is suitable for those in CT who may like the look of the Leyland Cypress, but whose yard is too shady.

The Japanese Cedar will grow in many different soil types and doesn’t need any pruning unless you want to train it into a hedge or screen. The Japanese Cedar looks great planted as a specimen, as well as when planted in a group.

The Serbian Spruce is a beautiful evergreen with a regal, pyramidal form and arching branches. Often with a slim and slender single trunk, the Serbian Spruce brings a calming sense of symmetry to the landscape. The main branches are lined with pendulous secondary branches.

The needles are short and are dark green on the top and silvery on the underside, lending the branches a sense of dynamism when you catch a glimpse of them flickering in the wind.

The narrow and relatively compacted form of the Serbian Spruce means it can be used in areas where other conifers would be unsuitable. The cones start out purple and age to a delicate cinnamon tone. Be sure to protect from harsh winter winds.

They make spectacular specimen plants and look equally as good planted in groups in landscapes with enough space to accommodate them.

If you’re looking for an evergreen tree to add a different sort of accent to your CT yard, then consider the European Fan Palm. Palm trees can add a tropical sense of calm to just about any landscape. The European Fan Palm is cold hardy, and tolerant of a wide range of conditions, making it suited for the changeable climate of zone 7 areas of CT.

European Fan Palm grows in clumps naturally but can be trained into single specimens by removing the basal suckers. Doing so will give you a taller, single tree. They are also suitable for container cultivation, and grow in partial shade, so can easily be brought indoors in areas with harsher winters.

The Rocky Mountain Juniper is a narrow, somewhat rounded evergreen that is often seen in the wild with several stems. The foliage on juvenile trees consists of pointed needles with a scale-like appearance and a bluish-green to green-grey color and dark berry-like cones. The cones are covered in a white bloom and mature in their second year. The bark can be either brown/reddish or gray and exfoliating.

The narrow crown of the Rocky Mountain Juniper features drooping foliage, whilst different varieties have varying foliage and shapes. The berry-like fruit is favored by wildlife. Favors dry and rocky sites without too much humidity. The Rocky Mountain Juniper serves as a host for apple cedar rust, so you may want to avoid planting one in close proximity to any apple trees.

Ponderosa Pines are fast-growing trees suitable for use as a windbreak or planted in groups for a privacy screen. They begin their life in a pyramidal shape, but mature to an irregular cylindrical shape. The broad to pyramidal crown flattens with age, as the lower branches are shed.

The bark on young trees is dark reddish-brown and matures to a brown/yellow russet color, with deep ridges and long scaly plates. The needles are dark green to yellow-green/ olive and usually occur in groups of 3.

Ponderosa Pines can be grown at high or low elevations, and can even tolerate salt. They prefer well-drained sandy loam, or clay loam. They’re extremely drought tolerant but can’t stand wet sites or poor-drained soils.

They can also be planted for reclamation projects and to prevent erosion due to their ability to grow on dry rocky, poor soil. The Ponderosa Pine features a deep taproot, making them difficult to transplant once established.

Evergreens can be planted to help ensure you get your year-round dose of green when you gaze out your window into your yard, even in the harsh winter months. Evergreens can also be planted as green screens, as windbreaks, to block out unsightly views or to dampen ambient noise.

Many species also require little in the way of maintenance, unless you want to grow a hedge. The majority of the state of Connecticut sits in zone 5 and offers homegrowers plenty of choice when it comes to deciding which evergreen to plant at home.