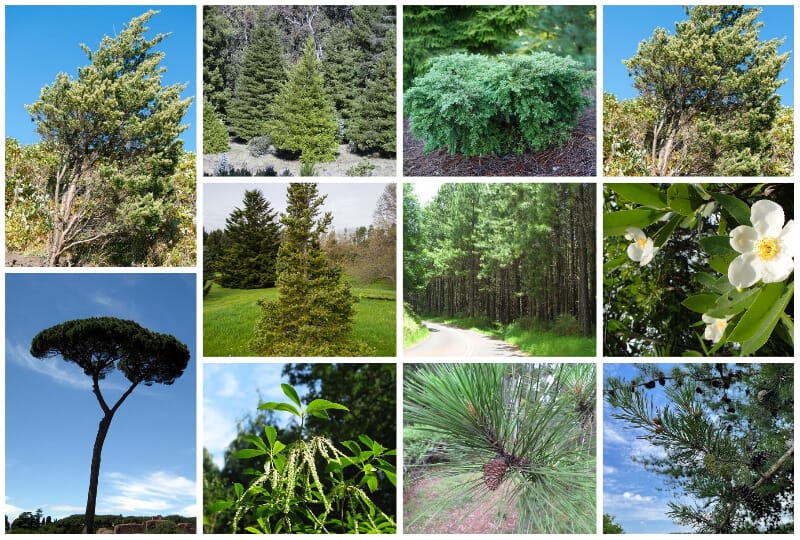 Evergreen trees are those that retain their foliage throughout the year, keeping your home landscape looking verdant and vibrant throughout the seasons.

The north of Georgia features high mountain ridges, while the south encompasses lowlands, swamps, and coastal plains, meaning there is a wealth of different flora that can be grown throughout the state.

The warm summers and short winters mean that the state can support many non-native species that are well-adapted to the local climate.

15 Evergreen Trees To Plant in Georgia

The Titi is a shrubby tree with a cinnamon-colored bark in youth, developing into a slender tree with a flaky bark with age. It’s either completely evergreen, semi-evergreen, or deciduous, depending on the location and weather, but should remain evergreen in Southern GA.

Clusters of fragrant white flowers cover the foliage from spring to midsummer, attracting bees and other pollinators, who make prized honey from the nectar.

The leaves are thick and oval, dark green above, and bright green below. Further north of Titi’s range, the leaves turn scarlet/orange in the fall. Titi occurs naturally close to swamps, streams, and backwaters and prefers acidic, moist, peaty, or sandy soils.

The Eastern Red Cedar is the most widespread of the eastern conifers. It’s a densely columnar to a broadly pyramidal evergreen that forms an unmistakable focal point in the landscape.

The foliage is scale-like and fragrant, either coarse or finely cut, and varies from gray-green to bluish-green to light/dark green. Cultivars retain their rich color year-round. Eastern Red Cedar is dioecious, with separate male and female trees.

These Cedar trees are enjoyed by many kinds of wildlife. The bark peels off on mature trees. The Eastern Red Cedar is heat, drought, and cold tolerant. It works well where other conifers struggle such as in dry, sunny areas, and can function as a privacy screen.

The Virginia Pine is a medium-sized evergreen that’s pyramidal in youth, developing an open, irregular flat to rounded crown with age. The branches are spreading, either ascending or descending from the cinnamon/brown trunk.

The foliage is yellow-green/dark green, 3” long, and often grows in a twist, arranged in tufts of two. Spine-scaled cones can persist on the tree for many years.

The Virginia Pine is a fast-growing tree, with an interesting irregular shape that works well as a specimen tree on poor, rocky sites where many other evergreens would struggle.

It’s also useful for preventing soil erosion, and as a windbreak. The Virginia Pine provides food and habitat for many kinds of wildlife.

The Eastern Hemlock is a straight trunked, broadly pyramidal tree with short, deep green needles with two white bands on the underside. The branches are long and pendulous, lending a refined character to the tree.

Small ovoid cones are produced and hang delicately from the branches. The bark is purple/gray and deeply furrowed on mature trees.

The Eastern Hemlock has a slow to medium growth rate and can provide good shade once mature enough. It can also be trained into a hedge, planted in groups, or as a solitary specimen for a natural-looking focal point.

It provides a valuable nesting point for many kinds of birds such as black-throated warblers, blackburnian warblers, and green warblers, amongst others.

The Eastern Hemlock grows best in humus-rich, acidic, well-drained soils and will tolerate full sun or full shade, and doesn’t like drought.

The Loblolly Pine is a large conifer with a straight growing trunk and a dense crown of wide spreading branches. It’s one of the fastest growing of the southern pines.

Pyramidal in youth, it loses its lower branches as it ages, leaving an open and rounded crown. The foliage is fragrant and consists of dark green, stiff needles, 5-10” long borne in clusters of 3. The cones are elongated, 3-6” long and persist for 3-4 years.

Loblolly Pines look best planted in groves so may be suited for those with larger areas they want to plant, perhaps as a privacy screen. They prefer moist areas with poor drainage, hot summers, and mild winters.

The Loblolly Pine is an important food source for many birds and mammals, with more the 20 songbirds feasting on the cones.

The Loblolly Bay is an evergreen columnar tree or shrub, grown largely for its large fragrant flowers.

The leaves are glossy, dark green, and leathery with a gray underside and measure 2-7” long. Large fragrant white flowers appear in abundance from spring right up until the first frost and grace the entire canopy.

The flowers, reminiscent of camellias, remain open for a day or two and are pollinated by bees, flies, and hummingbirds.

They are followed by flat capsules which contain 4-8 flat winged seeds. The bark on mature trees is rough and ridged and separated by narrow furrows.

The Loblolly Bay occurs in damp, acid swampy areas around pinelands around the Atlantic and Gulf Coast Plains. It’s suited for boggy and poorly drained areas. If you’re after an evergreen flowering tree suited for GA’s climate, then consider planting a Loblolly Bay.

Be sure to check Georgia’s hardiness zone before you plant to make sure your area is suited for their cultivation.

The Yaupon is a slow-growing densely branching upright small tree or large shrub with dark green 1 ½” long leaves with toothed margins. Greenish/white flowers appear in spring and followed are by vast amounts of small red berries on pollinated female plants.

Yaupon is dioecious, with male and female flowers on different trees. They ripen in the fall and persist into the winter months (or until consumed by birds) providing interest when many other species are dormant.

The twigs leaves contain caffeine and are brewed into a tea by indigenous Americans, who used to ceremoniously consume large quantities, and then vomit it back up, hence the Latin name.

Yaupon is popularly trained into an evergreen hedge, where it can be used as a privacy screen. It grows best in full sun or partial shade, in averagely moist soils. It tolerates drought, salt, and alkaline soils.

The bark is brown/reddish with flat ridges and is aromatic as is the foliage. The Atlantic White Cedar can be found in freshwater swamps. It’s a good choice if you’re looking for a conifer to plant in a poorly drained area close to a water source.

The Atlantic White Cedar is easy to maintain and is mainly disease free. It prefers sandy, peaty, moist, well-drained soils. Plant in full sun for best results. Whilst sometimes erroneously called a cypress, it’s not related.

If you are looking to plant a true cypress tree in Georgia, there are numerous varieties for you to choose from.

The Slash Pine is a fast-growing coniferous evergreen that sheds its lower limbs with age. In its youth its pyramidal, maturing into an open, round canopy, that creates dappled shade.

The leaves are long dark green needles, 6-12” long borne in clusters of 2 or 3 on the same branch. The needles remain on the tree for about two years. The cones are a chocolate, reddish/brown hue and measure 2-6” long and are an important food source for birds and small mammals.

The bark is reddish/brown and furrowed when young, becoming thick and platey with thin scales that flake off with age to reveal the cinnamon inner bark.

The lateral root system of the Slash Pine makes it useful in soil stabilization efforts, and its beauty makes it favored as a shade and ornamental tree. The Slash Pine does best in occasionally wet, moist acidic soil. It’s also drought and salt tolerant.

The Green Giant Arborvitae is a common alternative to Leylandii for hedging, due to its slower growth rate and ease of upkeep. The foliage is a vibrant middle shade of green, is glossier than other conifers, and is held in attractive sprays. The leaves are aromatic, giving off a sweet scent when crushed.

Green Giant Arborvitae can be used for an evergreen privacy screen that also blocks wind and noise. Grows best in any well-drained soil, in either full sun or partial shade.

The Fraser Fir is a medium-sized coniferous tree with a narrow, pyramidal habit and spire-like crown. The stems are short and flattened, resinous, and densely packed turpentine-scented needles which are shiny dark green above with two silver bands on the underside.

The seed cones are up to 3” long, dark purple when young becoming dark brown with protruding bracts with age. They are held high up on the branches, creating a pleasant contrast with the foliage.

The bark is thin, smooth, and gray-brown, with many resin blisters on young trees, becoming scaly and fissured with age.

This type of fir tree grows in full sun or partial shade, in moist, well-drained slightly acidic soils. It doesn’t do too well in high heat and humidity, so will be more suited to the northern, cooler parts of GA.

The Red Bay is a dense, well-rounded lightly scented tree with a short trunk. The branches are ascending and densely covered in narrowly oval leaves, which have a spicy taste and can be used in flavoring food.

Pale yellow flowers appear in pannicles and are followed by dark-blue to black fruit that is eaten by different birds.

The Red Bay is found in low wood and coastal forests, and as such will grow best in moist, acid soils in partial shade.

The Carolina Cherry Laurel is a fast-growing dense shrub or small tree, with an oval/pyramidal habit, smooth glossy green leaves that measure 2-4” long with a pointed tip. The leaves and stems produce an almond aroma when crushed.

Late winter to mid-spring sees the production of tiny white, fragrant flowers held in dense racemes amidst the foliage. They attract pollinators such as bees, amongst others.

Small, reddish-purple cherries follow, that ripen to shiny black in the fall and persist until the winter or until eaten by the birds.

The bark of the Carolina Cherry is smooth, becoming irregular with age. It makes a good tree for screens, hedges, or windbreaks. Plant in moist, well-drained soils. It’s drought tolerant once established

Cryptomeria are native to Georgia, specifically to the southeastern regions and are capable of growing up to 3-4 ft a year under favorable conditions. They have a tall and slender shape that tapers off to a point.

The foliage is bright green, emerging yellow in the spring, and becoming beautiful shades of blue/green in the summer.

The Stone Pine is a thick trunked pine with dark-green foliage and an umbrella-shaped crown. They can be found in coastal areas and along dry hillsides.

The bark is thick and plated deeply fissured with a reddish/brown to orange hue with a black edge on the plate edges. The foliage is stiff, dark green needles borne in groups of two, but the juvenile leaves are bluish/green and continue to be produced for up to 10 years.

The cones are broadly oval, with a chestnut brown color, and ripen 3 years after pollination. The Stone Pine is renowned for its production of rich, oily seeds known globally as pine nuts, although they can be harvested from other pines.

The Stone Pine thrives in sandy, stony coastal areas and is drought, salt, and heat tolerant.

Evergreen trees provide year-round verdant vistas in the landscape that remind us of our inseparable connection to the natural world.

The topography of the state of GA means that you can plant or encounter different types of evergreen trees depending on whether you’re in the humid, damp southern reaches of the state or the cooler upland areas.

Whatever you choose to plant, make sure it will survive in your particular microclimate before you commit to buying and planting.