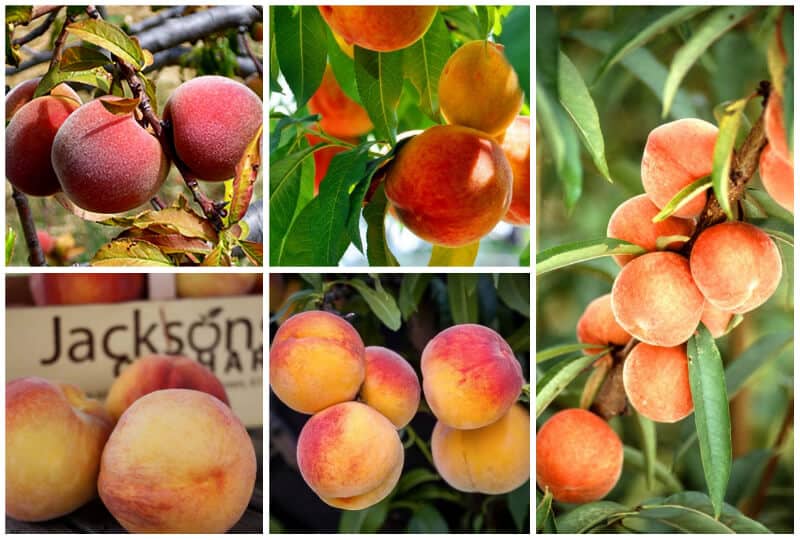 If you live in the ‘Peach State,’ why not try your hand at cultivating peaches at home?

Home grown fruit tastes leaps and bounds better than anything you can buy, as many varieties are often bred for shipping as opposed to their taste.

Peach cultivars are usually classified by how the stone clings to the fruit and there are three main types; cling stone, semi-cling stone, and freestone. They are typically harvested in the order above, with freestone peaches being the sweetest and juiciest.

Georgia produces more than 130 million pounds of peaches annually so why not try growing your own?

Flavorich Peaches are grown throughout the state of GA and are one of the first to be harvested around Mid-May. They are medium-sized clingstone fruit, with a dark red color on the outside and a pale yellow tone on the inside. The taste is sweet, with a pleasant balance of acidity.

The Flavorich tree also produces exceptionally large, showy flowers in March. Flavorich needs 700 chill hours, so can be grown right down in the south almost all the way down to the gulf coast.

Redskin Peaches can be grown in all locations around Georgia and produce freestone peaches. They are usually ready to be harvested around July/August. Redskins are a cross between two popular old peach varieties; Red Haven and Elberta.

Redskin peaches have a firm texture and a juicy, sweet, and mildly tangy taste and are perfect for eating fresh, baking, or canning.

Redskins are disease resistant and can handle temperatures down to -20 degrees. They are self-fertile, so you’ll get fruit with only one tree. However, your harvest will be bigger if you plant more than one variety with a similar flowering time close by.

Flordaking is an old-time favorite in GA, and can primarily be grown in the southern portion of the state. It’s a medium-sized clingstone peach, yellow in color, firm in texture, and a good variety for canning or pickling. They usually ripen in early May and require 450 chill hours to produce fruit and are self-fertile.

Surecrop peaches are primarily grown in Central and Northern GA and are a semi-freestone variety. Surecrop features a yellow inner flesh and is a juicy variety that ripens in June. It needs 1,000 chill hours, which is why it’s grown in cooler areas.

Surecrop is a fast-growing tree with a rounded shape when mature. The fruit is large in size, and is golden with a red blush on the skin.

Be sure to check the hardiness map of Georgia before planting a peach tree to be sure you can provide it with enough cold for you to be able to harvest your own peaches.

The Elberta peach is one of the most sought after peach varieties in the United States and was actually the original peach tree of the Peach State.

It’s a freestone peach that’s ideal for eating fresh out of hand, for canning as well as freezing. Elberta peaches ripen from late July to August, possibly later in colder areas. The flowers appear in the spring and are dark pink to purple in color and are ornamental.

Elberta peaches are large, juicy with a good flavor, and are good producers. Like all peach trees, Elberta will grow best in well-drained sandy soils and are not drought tolerant.

The Jefferson Peach is a medium-sized freestone peach that’s firm, with good texture and taste that are good for eating fresh. They ripen mid-season, so around early to mid-July in zone 6 (Northern GA) They require around 850 chill hours to flower and fruit.

The blossom of the Jefferson peach are hardy against late spring frosts, so you won’t have to worry about losing your crop if you’re in a colder part of GA. They are also show good resistance to brown rot.

O’Henry peaches were the first variety known to exhibit a fully red skin. They are a medium-to-large sized peach with a rounded to slightly lopsided shape.

The skin is taut and covered in a soft velvety down. The flesh is orange/yellow while the stone and surrounding flesh is red. O’Henry are freestone peaches with a firm texture and a sweet, fruity, slightly herby taste with an mildly tangy aftertaste.

O’Henry peaches are a late variety, ripening between the beginning/middle of August to early fall. They require between 700-750 chill hours below 45 F for the best fruit set.

Flameprince is a late-maturing yellow-skinned freestone peach that ripens in August/September.

It’s only moderately vigorous, and doesn’t grow quite as big as many other peach varieties, making it perfect for smaller yards. Flameprince requires 700 chill hours and features a sweet, tangy flavor that can eaten fresh, frozen, preserved, or dried.

Monroe peaches are large in size with a bright red skin and yellow background. They are freestone peaches with bright yellow flesh with a pleasing balance of sweetness and acidity.

These peaches usually ripen between Aug 1-10, according to the University of Georgia. They can be enjoyed either fresh, frozen, canned, or used for baking.

Monroe are reliable producers, and have exceptional frost tolerance. They require 750 chill hours to produce fruit.

Peaches In The Peach State

Georgia has a history of growing peaches, so why not try your hand at growing one of these popular fruit trees for yourself if you live in the state?

Not only will home grown peaches taste drastically better than anything you can buy, but you’ll also reduce your carbon footprint, and can share the surplus with friends, family, and neighbors.

Be sure the variety of peach you choose is appropriate for your zone, as they need a certain amount of chill hours to fruit.