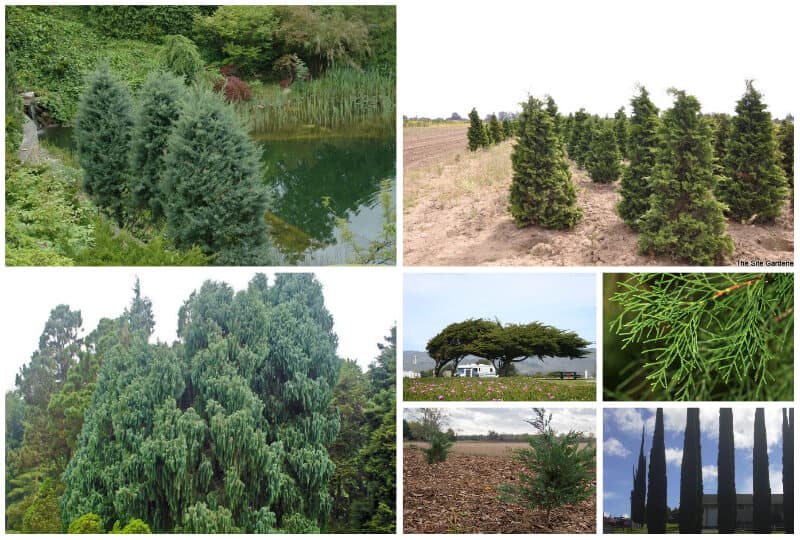 Cypress Trees are a large group of coniferous trees from the Cupressaceae family, along with many others that include ‘cypress,’ in their common name.

They are (usually) large evergreen trees that bear seed cones and have needle-like foliage. Whilst many associate cypress trees in Georgia with the swamps, you don’t have to live in a swamp to grow a cypress tree.

There are many different types of cypress trees you can grow in GA. Be sure to check the hardiness map of Georgia to ensure that what you want to plant is hardy to your seasonal winter lows.

9 Excellent Cypress Trees That Can Grow Well In Georgia

The Bald Cypress is the quintessential tree of the swamps of the American south. In the wild, it can easily be distinguished from its tendency to raise conical ‘knees,’ above its roots. No one is certain as to why it exhibits this peculiar behavior, but it maybe is to help oxygen reach its roots.

The Bald Cypress is a is a deciduous conifer with short slender branches and a pyramidal shape. Springtime sees the leaves yellow-green, soft green in the summer, and brownish-orange in the fall.

Small globular cones appear that are 1” in length with triangular seeds inside that attract wildlife. Whilst emblematic of wet areas, the Bald Cypress also adapts to dry sites and tolerates some drought.

The Italian Cypress is a columnar evergreen tree reminiscent of the Mediterranean. It’s loved worldwide for its ability to form a large accent in any landscape it’s planted in. The branches are ascending and are covered in green/blue scale-like leaves, and are highly aromatic when bruised.

The Italian Cypress is one type of Cyprus tree that thrives in hot dry climates with well-draining soil. It does well in the heat and humidity of GA. It’s drought tolerant once established and requires no pruning or maintenance.

The Leyland Cypress is a fast growing tree with a slender pyramidal form. It’s also commonly trained into a hedge, is an exceptionally hardy species and, according to the University of Georgia Cooperative Extension, is one of the most commonly planted landscape trees in Georgia.

It happily grows in a wide variety of soil types and climatic conditions, and so has been planted extensively as windbreaks and for privacy. The Leyland Cypress retains a strong dark green/bluish green color throughout the year.

The cones are small and globular, and are made up of 8 scales. The Leyland Cypress grows best in any fertile, moist well-drained soil. They require little maintenance, unless you plan on using as a screen or hedge, in which case annual pruning will be required.

The Arizona Cypress is a tough evergreen tree that tolerates heat and drought with ease. The foliage is a beautiful shade of blue/gray/silver.

It requires no upkeep, making it ideal as a windbreak, privacy screen or on property lines in hard to reach areas. Left unpruned, the branches take on a tiered appearance, and are laden with silvery, langerous needles that shiver in the wind.

If you want to plant a coniferous evergreen but your site is extremely exposed, then consider the Arizona Cypress, which is consider the most drought tolerant evergreen. It happily grows in poor soils but won’t tolerate wet areas.

The leaves are bright green in the spring, turning shades of brown/cinnamon/orange in the fall, which reveals the light brown ridged bark. The cones are purplish green, oval in shape and mature to brown.

Mature Pond Cypresses flare at the base, and produce cypress knees which form from lateral roots. The leaves are small and alternate, lanceolate and scale-like, and are shorter and smaller than the Swamp Cypress (Taxodium distichum) according to Oregon State University.

Young Monterrey Cypress trees are columnar or cone-shaped, becoming broad and spreading as the tree ages. In protected areas, it tends to take on a tall and straight aspect, but when subject to salt and sea breezes can become contorted and gnarled. The Monterrey Cypress is a long-lived species with fragrant foliage when crushed.

The Monterrey Cypress is very tolerant of dry and hot conditions, and prefers well-drained loamy or peat soils but can tolerate poor sandy soils. Cones ripen in the second year but can remain closed for many years on the tree.

The Bhutan Cypress is a large evergreen with an oval to broadly conical crown. The bark is thick and gray brown and peels off in longitudinal pieces. The branches are slender and drooping with thin, flaring tips and a horizontal spreading habit. The leaves are scale-like, dark green and furrowed.

The cones appear from February to March and mature May-June.

The Kashmir Cypress actually hails from Bhutan and not Kashmir as the name suggests. It features beautiful arching, weeping branches that flutter in the wind.

The foliage is a pleasing blue/green color. It features a conical crown in youth, becoming broad and irregular with age. It grows as a single trunked tree and has a smooth bark at first, later exfoliating in strips, revealing a purple brown inner bark.

The Kashmir Cypress grows best in sandy, loamy well-drained soil. It needs a mild climate so will only be suitable for southern GA gardeners with a sufficiently warm climate.

The Hinoki Cypress is a slow-growing evergreen coniferous tree with a pyramidal shape. The branches are spreading and horizontal and droop towards the end.

The foliage is dark green and has a white marking on the underside and is aromatic when crushed. The red/orange bark peels off on mature trees. The cones have 8 scales, and the females are greenish/brown whilst the males are orange brown.

Cypress trees are hardy coniferous (usually) evergreens, which often thrive in heat and can handle neglect. There are a wealth of different cypress trees for GA gardeners to choose from, that can serve as an accent in the landscape, or as a windbreak, privacy screen, hedge or even as a stand alone specimen.

Be sure to check that your plant is suited to your area before planting to ensure your tree survives long into the future.