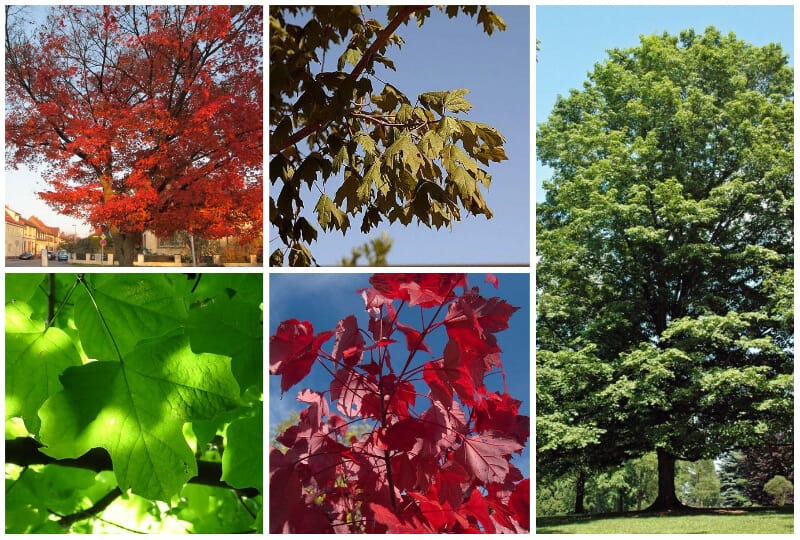 Maple trees are typically associated with the cooler climates of the Northeastern states and New England.

Maple conjures up ideas of fields on fire with autumnal shades of red, orange, and yellow. Maples are so enmeshed in the culture of North America that the Sugar Maple is the state tree of New York, and is even featured on the Canadian flag.

It may come as a surprise to many that maples can grow in the South, far away from the cooler climes often associated with them.

6 Maple Trees To Grow in Georgia

It features a wide-spreading canopy, making it ideal as a shade tree. The bark is silver and gray and becomes ridged and furrowed with age.

The Striped Maple is a smaller-sized maple in relation to its northern cousins. It’s a shrubby understory tree and features a short trunk with a greenish bark with a white stripe that fades as the tree grows.

Yellowish/green drooping flowers are produced around April/May. The autumn months sees the leaves turn shades of lemon yellow which contrasts beautifully with the green and white striped bark.

Fall sees the foliage turn shades of yellowish/green or striking shades of red, which give the tree its common name. The Red Maple will grow best in full sun or partial shade, in moist, acidic soil.

Cultivated Red Maples rarely reach as high as their wild counterparts, which can soar up to 100ft. Red Maples grown in GA are well adapted to the state’s heat and humid conditions.

During the months of March to April, male red maples produce reddish/pink flowers whilst females produce winged seedpods (samaras) later in the spring. Maples aren’t typically grown for their flowers, so if you’re looking for a flowering tree, then consider planting something else.

The Laceleaf Japanese Maple is one of the most popular maples for GA home growers, thanks to the unforgettable statement it makes in any landscape. It features a broad to rounded growth habit and layered branching.

The leaves change from bright green to hues of cream and pink throughout the seasons. Fall can see shades of golden yellow, red/purple, and bronze before being shed. There are plenty of places in GA where you can admire the spectacular show Japanese Maples provide.

Subtle red flowers emerge above the leaves in mid-spring before the leaves emerge. The Laceleaf Maple grows best in moist, acidic soil in either full sun or partial shade, but is an adaptable tree.

The roots are shallow, meaning that frequent watering is required in the early stages of development until the tree becomes established.

The Sugar Maple is a common sight in the GA landscape where it is often planted as a slow-growing shade tree in urban areas, thanks to its ability to tolerate pollution.

It’s a large tree with a dense and rounded crown, favored for its multi-colored autumnal shows. The bark is smooth in youth, becoming shaggier with age. The trunk is straight and adorned with wide-spreading branches.

The boiled and concentrated sap of the Sugar maple is the commercial source of maple syrup, although you may tap any Maple tree for sugar. The Sugar Maple will grow in rich, moist, well drained soils in full sun or partial shade.

It’s not salt tolerant and doesn’t do well in excessive heat and may suffer leaf scorch in drought conditions. The Sugar Maple will grow in zones 3-9, so be sure to check the hardiness map of Georgia to see whether it’ll grow in your area.

The Black Maple is a large tree popular in GA as its deep green foliage turns deep purple in the fall. It features a deep, rounded crown, a dark furrowed bark and offers eye catching fall color. The leaves appear wilted and have 3-5 lobes, with a tapered central lobe.

The lower leaf surfaces have dense and soft hairs. They are dark green above and yellow green below and the hairs are brownish. The flowers are drooping, and appear on tassel-like slender hairy stalks, and appear in pairs.

The Black Maple can be found in moist bottomlands and fertile floodplains. The crown will often have an opening in the canopy.

Flowering Season: April – May, with the leaves

Bringing The Cool Down South

Many species of maple trees flourish in the heat and humidity of the south. Most maples prefer full sun to partial shade and, moist, fertile, well draining soil for optimal growth.

Be sure to check your specific conditions before planting to ensure your best chances of success.