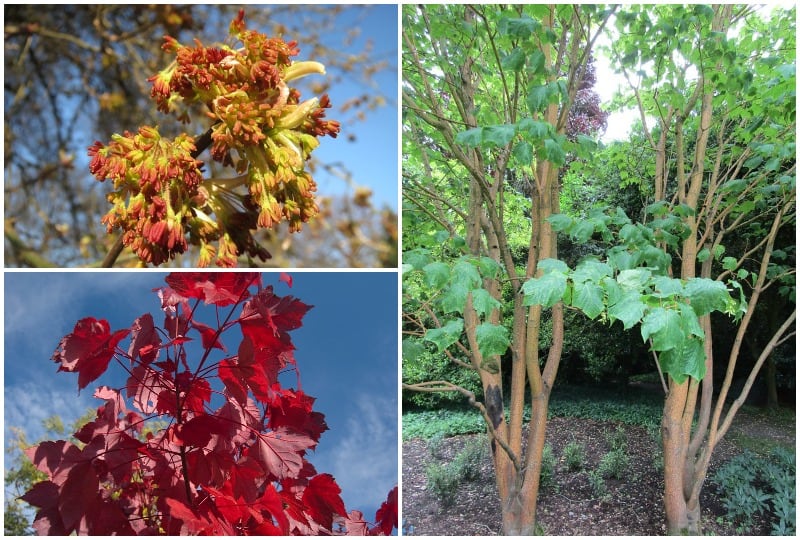 Pennsylvania is home to a diverse range of maple trees that form part of the native forest.

Known for their beautiful autumnal colors and as being the source of delicious maple syrup, maples are popular trees for homeowners and to spot in the woods.

Homeowners favor maples because of their rapid growth, architectural interest, and because they provide shade in the hot summer months. Many kinds of maples also attract birds and other wildlife.

Let’s look at some maple trees you can find in PA.

6 Maple Trees to Grow in PA

The silver maple is a popular type of maple in Pennsylvania. The name comes from the silver underside of the otherwise green leaves. They are large and stately trees, with an undulating crown due to the branches which tend to hang down. Fall sees the leaves turn red, with some even turning orange/yellow, which creates a pleasant effect.

The flowers emerge before the leaves. Silver maples have a shallow root system that can push up hard surfaces. In their natural habitat, they can be found near streams and marshes, so are tolerant of moist soils, although they can also be grown in drier areas. Silver maples can be found on streets as well as in parks.

The striped maple has a distinctive look due to its unique striped bark, which is green and smooth, running vertically when young, changing to reddish-brown as the tree matures. Fall sees the typically, three-lobed maple leaves turn a beautiful shade of yellow, whilst winged seeds hang off the branches in clusters.

Striped maples are small in terms of trees and often appear more like shrubs. They prefer a damp climate, in full to partial shade with well-drained soil. Whilst they’re not suitable as a shade tree, they’re very good at attracting wildlife to your yard, including moose and whitetail deer who love to feast on the leaves, as well as the black-throated blue warbler.

Flowering Season: May-June. Fruits ripen from September to October and are dispersed in October and November

Red maples are named after the eye-catching shows of red they put on during the fall. They’re one of the most common deciduous trees of eastern and central North America. Red maples have smaller leaves than other maples but are still suitable as shade trees. They are deciduous and have a round to oval crown.

They’re fast-growing; faster than Norway and Sugar maples, but not as fast as silver maples. Small pink flowers appear in late winter to early spring, which are very attractive to pollinators.

Red maples prefer full to partial shade with moist soil. They produce a lot of samaras, ‘helicopter-like’ seeds which can be used to grow saplings but can also prove problematic as they can clog drains and gutters if left unchecked.

As the name suggests, the Norway maple is not a native of PA but was imported from Europe as an ornamental species. However, today it is commonly found in parks and throughout streets all over the state. They are an extremely adaptable species, which explains why they’re widespread throughout the state.

Norway maples have shallow roots, which is worth bearing in mind as it may make growing things like grasses or ground covers underneath them a challenge. They offer good shade, and their leaves have five lobes and coarse teeth. Very much a victim of their success, be careful before planting as some consider it invasive.

Sugar maples are well known as being the source of maple syrup, which is attained from the sap of these emblematic trees. They’re also commonly grown for their shade and ornamental value. Native to eastern North America, they’re found in abundance in PA.

The dense crown features 3-5 lobed leaves that turn various shades of beautiful in the fall; from scarlet to gold. The bark is smooth, grey, and dark.

Box elder is a fast-growing, medium-sized tree, that’s found over almost all of the US. The foliage is light green, and turns a striking shade of yellow in the fall. Box elder maple’s have odd-pinnate compound leaves with 3-5 lobes. Small, unassuming greenish/yellow flowers do appear in the spring/ early summer but aren’t the main attraction of this maple.

Box elder maples are tolerant of a wide range of soil types. However, they don’t do well with shade and prefer full sun for optimum growth.

Maples are so prominent in the eastern US states that many identities have been formed around these trees. Prized for the sugar-giving sap of the Sugar maple and the vibrant autumnal colors of most members of this group, it’s no wonder maples have been popular for so long.

Whether it’s for maple syrup, shade, to attract wildlife, or for their overall appeal in the landscape, there are many reasons to plant a maple tree in Pennsylvania.

It always pays to check the Pennsylvania planting zone map to ensure you are planting the most suitable tree for your particular climate zone.