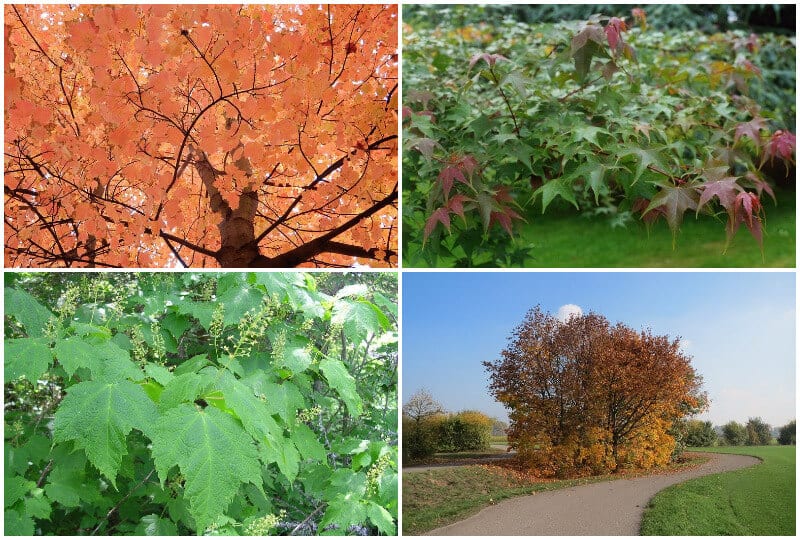 Colorado is a state whose natural beauty is sure to astound anyone who visits.

Mountain scenery, including valleys, plateaus, and rivers all grace this stunning landscape.

CO is a tree lovers heaven, as one-third of the state is covered in forest. Maple trees are emblematic trees and can easily be recognized by their palmate leaves.

They are enjoyed for their showy fall colors, for the shade they provide and their delicious sweet syrup.

The Tatarian Maple is a small tree or shrub that is native to Southeastern Europe and Western Asia but can be found growing in many temperate areas of the world. It is often multi-stemmed and round to wide-spreading.

The leaves are usually unlobed (although younger trees may have 2-3 lobes) They are a medium shade of green that changes to yellow, brown, and reddish in the fall.

Greenish/white flowers appear in panicles, and the fruit are samaras with parallel wings. The Tatarian Maple grows best in full sun to partial shade in well-drained soil and is drought tolerant.

The Red Maple can be found in abundance in the Eastern States such as Maryland and New Jersey. It’s a large tree with a compact or rounded crown and red autumnal leaves, fruit and stalks.

Young Red Maple Trees have a smooth gray/silver bark which provides winter interest after the leaves have been shed. Red Maples are tolerant of most soil conditions, but prefer slightly acidic moist conditions.

The Green Mountain Maple is smaller than most other maple trees and grows well at higher elevations. In its natural environment it grows as a small understory tree with multiple trunks that are purple to reddish brown. The yellow green foliage turns orange/bright red in the fall.

The Green Mountain Maple is adaptable to many conditions. The Latin name means spiked and refers to the clusters of flowers. Beavers, moose and deer browse the bark and grouse eat the buds. It’s an important species for preventing erosion on stream banks and steep areas.

The Green Mountain Maple is a good choice if you’re looking for a small tree for Colorado.

Flowering Season: March to May

The Painted Maple is a broadleaf deciduous tree with a tall, rounded and spreading crown. It’s native to Japan, China, Korea and Mongolia, and sometimes grows in a shrub form. The leaves are variable, 3-6” long, with 5-7 triangular lobes.

They emerge bronze in the spring, changing bright green in the summer, with shades of gold and crimson, yellow and orange in the fall.

Greenish/yellow flowers appear in upright clusters in spring and the fruit are samaras 1.5” long. Painted Maples can be grown in full sun or partial shade. The Painted Maple is a good choice for a patio or as a tree for a small space in Colorado.

The Bigtooth Maple is a small to medium sized tree with a spreading, dense and rounded habit. It is often seen in a shrub-like form. The bark is dark brown and scaly from which stocky, thick branches emerge.

The deciduous leaves have 3-5 lobes and turn bright red golden in the fall. The Latin name refers to the large teeth on the leaf margins. Leaves can measure up to 5 inches in length.

Bigtooth Maples grow well in rocky soil and the sap is used to make maple syrup, alongside the Sugar Tree (Acer saccharum)

The Sugar Maple is the most common used maple for the production of maple syrup and is a large tree with a dense crown. The leaves are 8” long and turn shade or orange, red, yellow and everywhere in between.

The bark of young maple trees can be quite smooth but becomes shaggy with age. The central trunk is typically straight and the branches are wide spreading.

The Norway Maple is a large shade tree native to Europe and naturalized in North America. The young bark is olive to light brown, becoming gray and furrowed with age.

The Norway Maple is easily confused with the Sugar Maple but can be distinguished by the angle of the samaras, the width of the leaves and the white sap that emerges from cut leaves, twigs and petioles.

The leaves of Norway Maples have 5-7 lobes and are often wider than they are long. They are hardwooded and less susceptible to storm damage than other maples. The dense crown casts a dense shade that can block out natives if left unchecked.

The Amur Maple is another maple suited for small areas that also provides a red, yellow and orange autumnal show.

It can be trained either as a small tree or as a multi-stemmed shrub. The Amur Maple will grow best in full sun to partial shade in well-drained soil, and is adaptable to a range of different soil pH.

The Amur Maple can suffer from iron deficiency in Colorado, resulting in yellowing summer foliage. It’s tolerant of wind, dry soil and drought and casts a dense shade.

Maple trees are emblematic of North America; so much so that it’s enshrined on the Canadian flag. Whilst Maples can withstand many different climates, they are most commonly found in cooler areas of the country, such as the North and Northeast.

Find out the planting zone in Colorado you live in and ensure you choose the best maple tree for those hardiness conditions.

There are different kinds of Maples that can be planted in CO so residents can enjoy their fall colors, shade and potentially sugar provided you’re willing to work for it.