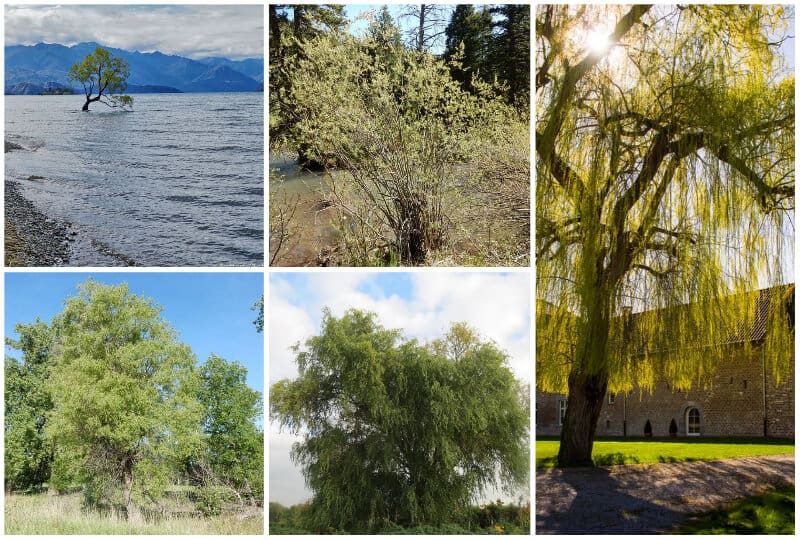 There are about 400 different types of deciduous trees and shrubs in the Willow (Salix) family. They are mostly found in cool, temperate, moist areas with access to plenty of water.

Willows are admired and widely planted for their ornamental value, shade, and erosion control. Willows are also the source of Salicylic acid used to fabricate pain relief medication and used for their timber.

13 Types Of Willow Trees To Grow In Colorado

The Crack Willow is native to Europe, and Western and Central Asia. It has a rounded and half-open crown.

The leaves are lanceolate, and alternate, and the margins are finely toothed. The branches are thin, flexible, and greenish. The yellowish, red buds are compact and appear tightly together. Catkins appear with leaves in the spring.

The bark is smooth and white gray, turning black-gray to fissured with age. The Crack Willow likes growing near riverbanks and embankments in sandy to loamy, sandy moist spots in acidic or alkaline soils. Plant in full sun or partial shade.

The White Willow is a broadleaf, medium-sized tree. Its common name comes from the white color of the underside of the leaves.

The leaves are paler than other willows and are more yellowish/orange than the Crack Willow (Salix fragilis.) New shoots are green to gray-brown and the branches are slim.

The flowers are catkins which appear as thin cylindrical clusters with barely visible petals and are pollinated by insects. Female catkins are slightly smaller and narrower than males.

The White Willow is useful in restoration projects where it can help prevent erosion and stabilization of slopes near waterways. Its fast growth rate makes it suitable for biomass production.

The White Willow needs access to water which is why it is normally found in riparian ecosystems. It’ll tolerate a range of soils but prefers calcareous, sandy soils and can usually be found at elevations up to 7,800 ft.

The Peachleaf Willow is a fast-growing deciduous, multi-trunked small tree with weeping branches and orange-yellow twigs.

It usually has several upright branches and a spreading crown. The foliage is narrow and has a green-yellow color. Catkins appear on the Peachleaf Willow before the leaves and attract bees and other beneficial insects and pollinators.

The Peachleaf Willow is the common willow seen on the Northern Plains where it serves to protect river banks and prevent erosion. Both the common and scientific names point to the resemblance of the leaf to that of the peach tree.

The Weeping Willow is a medium-to-large deciduous tree with an abundance of graceful, weeping branches and an open crown that reaches downwards towards the ground. The leaves are narrow, lanceolate, and light-green yellow above, ad grayish-green below in the summer months.

The Weeping Willow is dioecious, with separate male and female trees. Soft green catkins grace the tree before the arrival of the leaves and attract a wide array of pollinators. It can be admired as a specimen tree, and like all willows thrives near water.

It grows best in full sun or partial shade in fertile, moist, well-drained, clay, loamy, or sandy soils that are either acidic, alkaline, or neutral.

Flowering Season: March to May

The Black Willow is a fast-growing tree with an open crown and often with several trunks. The leaf blades are narrow 5” long, and tapering to an elongated tip with finely serrated margins. The twigs are bright yellow/green and the catkins are yellow-green. It’s typically found in wet soil around rivers and streams etc.

The Black Willow is the largest of the Willows found in the New World with an extensive range that extends throughout the country. Large trees are useful in preventing soil erosion and binding soil on river banks. The Black Willow is also popular as a shade tree and is useful as a honey tree.

The Laurel Willow is a fast-growing, low-branched spreading tree with glossy green foliage. It has a compact and oval/semi-rounded form, with alternate, simple, elliptic to ovate, or elliptic to lanceolate leaves.

The upper side is a deep shade of green whilst the underside is lighter, with a yellow mid-rib. The leaves are aromatic when crushed.

The Laurel Willow functions well as a windbreak or privacy tree in CO. It’s an extremely adaptable tree, capable of withstanding both dry conditions and standing water alike. It’s considered drought-tolerant, suitable for xeriscaping, and thus useful in drier areas of CO.

The Globe Willow is a dense, upright, and rounded tree, with drooping foliage similar to the Weeping Willow (Salix babylonica).

It’s a soft textured tree with narrow leaves and slender branches that point upwards unlike many other willows. The leaves are a vibrant shade of green, with silver-green undersides, and turn yellow in the fall.

The bark starts out 8light green when young and becomes darker and fissured with age. The cold and drought tolerance of the Globe Willow makes them suited to desert areas of Southern Colorado.

The Goodding Willow is native to wetland areas of the southwestern states. It has a moderate growth rate and an upright form. The deciduous leaves are a medium shade of green.

It can be found at elevations up to 7,000 ft in the Colorado Plateau. It can tolerate salinity and alkaline conditions and is a useful species for ecological restoration projects.

The flowers appear as catkins on separate male and female trees.

Geyer Willow is a large shrub or small tree that grows at a fast rate. The deciduous leaves are medium green and narrowly lanceolate. The flowers are yellow and eye-catching and emerge in the spring. The female catkins appear alongside the leaves.

Geyer Willow can be found growing alongside streams and rivers at elevations between 5000-10500 feet. It will adapt to sandy loam and clay soils.

Bebb’s Willow is an adaptable willow in northern climates and thrives in areas ravaged by fire and flood and can often be seen growing near riversides. It has a columnar shape and can be seen or trained as a shrub or small tree with either single or multiple trunks.

The winter buds and new branchlets have a red tinge to them, making the wood of Bebb’s Willow attractive for carving and furniture and a popular source of ‘diamond willow wood.’

The edges of the leaves have no blades, teeth, or lobes. The bark on mature specimens is ridged or plated. Bebb’s Willow will grow best alongside rivers or streams in moist, rich soil. In the wild, it’s also found in drier upland areas.

The Narrowleaf Willow is the most widely distributed willow in North America. It grows as a shrub, thicket, or sometimes as a small tree.

It’s widely distributed around CO and can be found growing from the plains upwards to the lower mountains, bordering streams and ditches. The leaves are narrow and measure 1- 4” long, with either few or no teeth.

The stems are pale to dark brown, whereas the bark is thin, cracked, and gray-brown.

The Sandbar Willow is similar to the Narrowleaf Willow (Salix exigua) except that it has relatively smooth leaves. The leaves are also the longest of any willows in proportion to their breadth.

Both species can be known by the common names Sandbar Willow and Coyote Willow. The Sandbar Willow can be found growing near the western boundary of CO at elevations between 4500 to 6700 feet above sea level.

Scowler’s Willow is a deciduous shrub or small tree that’s widely distributed in the mountains at elevations between 8,000 and 10,000 ft above sea level.

It can sometimes be found as low as 6,500 ft or as high as 11,000 ft. It usually has multiple stems and thrives in dry and cold areas. The straight stems usually support only a few branches which result in narrow crowns.

The stem bark is thin and narrow, with dark brown, flat ridges and the twigs are whitish green. The leaves are oblong to elliptical, short-pointed, and tapered towards the base with wavy tooth margins. They’re dark green above and white-grayish and hairy on the underside.

It’s dioecious, with male and female flowers on different trees.

Willow trees thrive in cool and moist riparian areas, although some will thrive in drier conditions. Colorado is home to several trees in the Willow (Salix) genus. Willow trees are admired for their unparalleled beauty and utility in providing shade and ecological protection and restoration.

If you want to find out more about willow trees we have done a full article on the different types of willow trees which you might also like to read.

Whilst certain dry areas of the state of CO won’t be suited to these moist-loving trees, there are plenty of areas in the state where you can plant a willow tree in your yard and enjoy their gracefulness.

Take a look at our hardiness and planting zone map for Colorado to ensure you plant the tree most suited to your area.