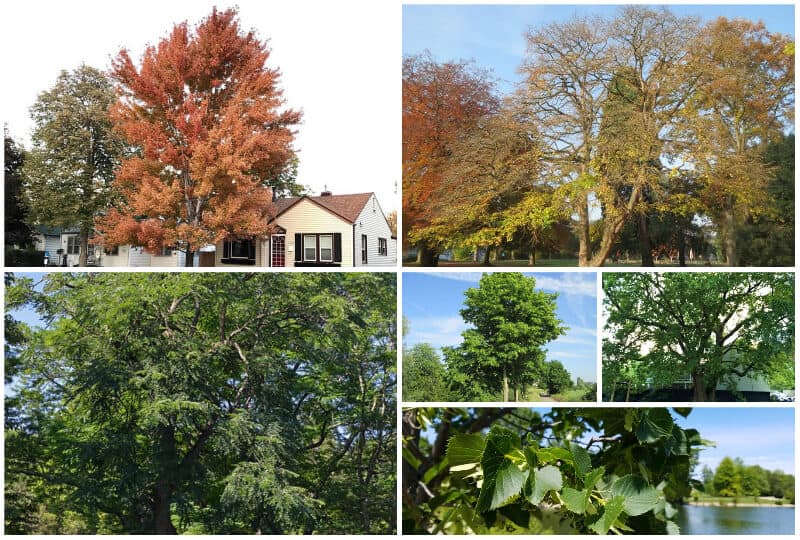 There are infinite reasons to choose to plant a tree in your yard. One of the many reasons in hot areas is for shade.

The state of Colorado experiences, a hot and dry climate, and its hardiness & planting zones incorporate zones 3a-7a.

Whatever trees you choose for shade must both be cold-hardy and drought-tolerant to survive Colorado’s changeable climate.

The Shademaster Honeylocust is a hardy and adaptable shade tree. It’s also disease resistant and thornless, unlike many other Honeylocust. The rounded shape of the honeylocust provides dappled shade. The foliage is bright green in the spring, turning to shades of golden yellow in the fall.

Unlike many other shade trees with large foliage, the Shademaster Honeylocust has smaller-sized leaves, which means there’s less mess to clean up when the leaves are shed.

The Shademaster Honeylocust can easily be grown in dry or wet soils, hot and cold weather, acidic or alkaline conditions, clay or sandy soils, in polluted air, and can even tolerate salt.

The Redmond Linden Tree has broad leaves, unlike the smaller leaves of the previously listed tree. The leaves grow densely throughout the tree, making them perfect as shade trees. They are glossy-green in the summer months and turn bright yellow in the fall.

Small clusters of highly fragrant yellow flowers appear in the summer that are extremely attractive to bees. The flowers are followed by small dangling fruit.

Once established, Redmond Linden Trees are fairly drought tolerant and should only need to be watered throughout extended dry periods. They can adapt to a range of soil types, but prefer a moist, well-draining soil with a neutral pH. They have a moderate growth rate of between 1-2 feet a year.

The Kentucky Coffee Tree is tolerant of pollution, making it well suited for urban environments and inner cities. The shape and foliage cast a delicate, dappled shade.

The branches are coarse and ascending, forming a narrow crown and spreading canopy. Spring sees the appearance of star-shaped flowers that emit a lovely fragrance.

The flowers are followed by leathery seed pods measuring between 5-10 inches that persist throughout the winter, meaning the Kentucky Coffee tree provides year-round seasonal interest.

The Northern Catalpa is an eye-catching tree that features large heart-shaped leaves and fragrant trumpet-shaped flowers. It grows in an oval shape one-of-a-kind kind twists in the branches and trunk.

Long narrow seed pods follow the flowers, and last through the winter, providing architectural interest in the cooler months.

Northern Catalpa makes for good shade trees with their large and interesting leaves which measure 12” long and 4-8” wide.

They are also a fast-growing species that is capable of growing between 1-2 feet a year. Plant in full sun or partial shade and water well until established. They’ll tolerate some flooding, as well as wet or dry conditions.

The Autumn Blaze maple features a princely form and stunning fall colors that are sure to make it stand out in a larger landscape. The Autumn Blaze is a hybrid between the red (A. rubrum) and silver (A. saccharinum) maple, both of which are North American natives.

Featuring an oval crown and ascending branches the Autumn Blaze Maple reaches maturity quickly and can grow up to 2 ft a year under favorable conditions.

An added benefit of growing the Autumn Maple as a shade tree is its pollution tolerance, especially important if you plan on growing it near a street with lots of traffic. It’ll adapt to a range of soil conditions, including nutrient-poor areas.

The Turkish Filbert features a pyramidal shape and thick, tan to gray bark and a short trunk supporting dense horizontal branches. The leaves are dark green and lush, and remain on the tree long into the fall, before finally turning pale-green/yellow before falling.

Female flowers are inconspicuous, 2-3 inches long. Male catkins are produced in the spring and are followed by clusters of fruit which prove irresistible to squirrels. Older trees may have a corky, ridged bark which exfoliates in sections to reveal an orange/brown inner bark.

The Sugar Hackberry has a wide, open crown, with spreading, pendulous branches. It’s a fast-growing tree with broad, vase-shaped crown.The bark is pale and smooth bark, sometimes with light, cork-like patches. The deciduous leaves are up to 4 inches long.

Sugar Hackberry makes a good shade tree, as it grows as wide as it does tall. It’s also fairly tolerant of urban stresses, making it suitable for inner cities.

Whilst native to the Southeastern states, where it grows along riversides and streams, it also easily adapts to dry soils. The small berry-like fruit attracts numerous birds and squirrels.

The branches of the Sugarhackberry tend to break under heavy snow, ice and wind, so may not be suited for some areas of CO.

Littleleaf Linden is recommended by the Colorado Tree Coalition as a medium-sized shade tree. It features heart-shaped leaves which are lopsided at the base, 2-3 inches long with saw-toothed margins.

Clusters of yellow flowers appear in the summer when other trees have finished blooming, and emit a pleasing fragrance that’s irresistible to humans and pollinators alike.

The leaves change from bright green to glossy yellow-green with the seasons. The Littleleaf Linden offers good shade thanks to its dense canopy.

One downside of this tree is that it’s not particularly drought-tolerant, and the leaf margins can scorch in summer drought, but this doesn’t cause lasting damage. It prefers moist areas but doesn’t do well in wet areas.

Grow Your Own Shade

Whilst many think of mountains and high plateaus when thinking about the state of CO, this is not the whole story; the summers can also be warm and parched. The hot and dry climate of CO means that planting your own shade tree is a must for those who want to spend time outdoors.

Shade trees can even provide an ecological way to cool your house and reduce your carbon footprint. Fortunately there are a wealth of shade trees for CO residents to choose from.