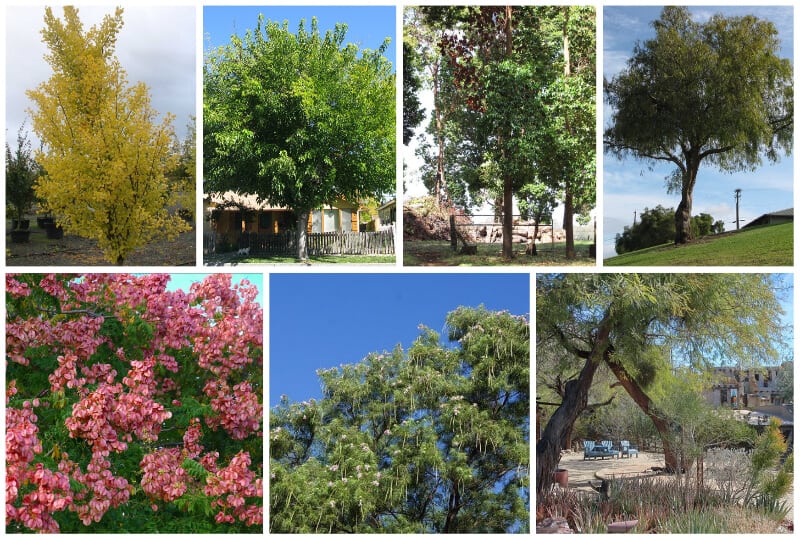 Arizona is a land of stunning landscapes that has a ruggedness to it that few could refuse to be moved by.

But the harsh unforgiving, unrelenting sun means that you’ll likely need some form of shelter to enjoy time outdoors and to keep your home and garden slightly cooler during the scorching summer months.

Fortunately the climatic conditions of state means that the home gardeners has a wealth of options to consider planting, whether you’re in the cooler uplands or desert lowlands.

Let’s look at some of the best shade trees for Arizona.

The Blue Palo Verde is the state tree of Arizona. It’s also one of the most popular trees for desert gardens, with its short, blue-green trunk, and gentle spreading crown. The foliage is small and pinnately compound, and is absent most of the year due to arid conditions, but the tree still manages to cast a delicate shade.

Bright golden/yellow flowers 2-4” across cover the tree in the spring and sometimes persist until midsummer. The flowers, being a rich nectar source attract hummingbirds, bees, and other pollinating insects.

Bean-like seed pods follow, which are eaten by many birds and small mammals. Both fast-growing and drought-tolerant, the Blue Palo Verde is a versatile tree, both functionally and aesthetically.

The Museum Palo Verde is a medium-sized deciduous tree that develops of spreading canopy habit. It can easily be pruned into a canopy tree that casts pleasing shade over its surroundings. It’s well-suited to the AZ climate and should be watered deeply but infrequently to avoid rapid growth that can cause weak limbs.

Unlike other Palo Verde’s the Desert Museum has thornless green stems and branches. Spring sees the production of a prodigious amount of lemon-yellow flowers.

The Desert Museum Palo Verde is popular with AZ gardeners due to its fast-growing rate, intense flowering, thornless nature,, and for the delicate shade it casts. It grows best in areas exposed to full sun, heat, and in well-drained soil.

The Velvet Mesquite is another popular option if you have a wide yard. The short-forking trunk is spiny and the crown consists of spreading branches, replete with velvety/hairy foliage, twigs, and pods.

The leaves are long and made up of 12-20 leaflets 2” to ¼” wide, which are divided into further leaflets. They are all smooth, and grey.

Cream-colored flowers appear on a 3” long flower stem that honeybees seem to particularly enjoy. The stamens turn yellow with age.

The bean pods that follow measure 8” and are valuable livestock feed. The shoots, leaves, and pods are high in protein. The Velvet Mesquite also fixes nitrogen in the soil, so enhances nutrient uptake of the surrounding plant life.

The Velvet Mesquite is native to central and southern Arizona and can be found near washes around the foothills of Tucson. It grows larger than other related species and creates decent shade for the homeowner from the scorching desert sun.

Flowering Season: May to September

Sissoo is a medium-sized tree with a light crown and a crooked trunk. It’s a fast-growing evergreen, that thrives in hot, arid areas prone to drought. This evergreen to semi-evergreen species is noted for its soft leaves which flutter in gentle wind and provide a calming effect on any onlookers, much like aspens in cooler climates.

They fit right into the Western landscape and are large shade providers. They function as classic leafy shade trees, unlike the Palo Verdes, whose shade isn’t all produced by its leaves. Sissoo has low water requirements and can blend into many different garden styles seamlessly.

If you’re looking for a tree with features that you don’t often see in many desert-hardy species, then look no further than the shoestring acacia. Its upright, columnar growth habit and evergreen foliage are not often seen together in trees suited to AZ.

They are both moderately fast-growing and drought-tolerant and may need some supplementary water in the desert southwest.

Shoestring Acacia will grow in either full sun or partial shade, is cold hardy down to 18 Fahrenheit and is adapted to the low desert heat.

Its natural habitat is near rivers and streams in Australia, so it’ll tolerate heavy clay soils and seasonal flooding. Well-drained soil and deep irrigation will suit the Shoestring Acacia best.

The thornless Chilean Mesquite tree is a heat-loving, drought-tolerant tree that looks stunning in the desert landscape.

It’s the kind of tree that many people associate with the desert; with a wide canopy of soft, fern-like bright green foliage over twisted and gnarled branches. Chilean Mesquites can be trained as single or multi-trunked trees and cast light, delicate shade in the landscape.

The fast-growth rate of the Chilean Mesquite means you can enjoy its benefits without too much waiting time. Their wide canopy means they can also be used as a living privacy screen. Once established, they require little in the way of water or upkeep.

The Tipu is a medium-sized leguminous, fast-growing shade tree native to Bolivia. It’s most commonly seen as a single-trunked tree with a spreading canopy. Summer sees the canopy covered in bright yellow/apricot, pea-sized flowers, before turning into dark brown seed pods. The flowers are rich in nectar so do well to attract pollinators to your yard.

Grow Tipu in full sun to partial shade, but select your site carefully, as the roots are known to cause disturbances to existing structures. Plant in either moist clay, dry sand, clay,, or loam.

They’ll tolerate alkaline soil but do best in acidic conditions. Whilst tolerant of some drought, they’ll appreciate some supplementary irrigation.

Those looking for a beautiful shade tree with stand-out features and low to moderate water needs will be pleased with the Tipu.

A mulberry tree is an excellent choice for a medium to large shade tree for the home garden. The problem is the fruit stains everything it comes into contact with and birds disperse the seeds, making it invasive in many areas. The fruitless mulberry solves this problem whilst still providing dense shade.

The leaves of the mulberry are dark green in the summer, turning yellow before dropping in the fall. Plant them away from foundations, as their strong roots can uplift cement. They’ll tolerate any kind of soil, but do best in a well-drained loam and require little to no pruning once mature.

The California Pepper is a fast-growing, sun-worshipping tree suited to dry, arid climates. It’s an evergreen with bright green, fern-like leaves that provide a lush fell to the landscape so can be suited to just about anywhere on your property, provided there’s enough space for its broad spreading canopy.

Desert gardeners will appreciate the drought-tolerance of this tree, and how it can survive with little water due to its deep roots. Once established, you can forget about watering or any maintenance and just enjoy the shade offered by the generous proportions of this tree.

This fast-growing deciduous shade tree provides a stunning show of bright, fragrant flowers in the summertime when few other trees are in bloom. The flowers are followed by long papery seed husks in fall that resemble chinese lanterns. They turn a pink to rose color and persist for around 3-5 weeks.

The Chinese Flame Tree provides year round interest and will suit anyone looking for a smaller shade tree with a compact growing habit. The Chinese Flame tree is easy to grow, and thrives in full sun with low to moderate water needs. It’ll grow in clay, sand or loam, in either acid, alkaline or neutral soil.

Autumn Gold Ginkgo Biloba is regarded as having the best fall color, as the name implies. Ginkgo bilobas have been around since prehistoric times, so can withstand everything from heat, pollution to salt.

Ginkgo Biloba is a deciduous tree with round and broad symmetrical crown. The canopy is composed of fan-shaped leaves that turn a gorgeous deep shade of yellow in the fall.

Ginkgo is a popular shade tree as it establishes easily in almost any landscape and casts dense shade. It’s practically pest free and withstands storm damage. It’ll tolerate a wide range of soil types, including both acidic and alkaline soils.

The Brisbane Box is an Australian-native, and is a valued as a superb shade tree. Their wide and spreading canopy make them an excellent street or lawn tree. The Brisbane Box has a rounded canopy of deep dark oval, glossy foliage that casts a soothing shade.

This medium-sized tree tolerates a wide variety of environmental challenges, such as heat, smog, and different soil types. Once established, they are drought tolerant.

The African Sumac is a medium- size evergreen tree with a low branching habit and round canopy. The foliage varies in color from a deep olive green to a pale green and has an earthy resinous smell when crushed.

They are palmate, and divided into 3 narrow leaflets 3-5” long. Inconspicuous yellow-green leaves appear in late winter followed by a small fruit that’s enjoyed by birds.

The African sumac was first introduced to Tucson in the USA, where it has adapted well to heat, aridity, poor soil and drought. It’s commonly planted as a street and garden shade tree in AZ. Like most trees, it’ll grow larger when planted in deep soils with summer irrigation.

The Desert Willow is a fast-growing flowering shade tree loved by landscapers and homeowners alike. It’s a small tree or large shrub that has a leaning/twisting trunk and open spreading crown.

The leaves are dark green, willow-like, deciduous and both opposite and alternate. The blossom is funnel-shaped and opens with five petal-like lobes. These violet-scented blossoms are followed by slender seed pods.

Loved for it’s rapid-growth, drought tolerance and ease of maintenance, it’s commonly grown in its range from south-central Texas, south to Nuevo Leon and Zacatecas, and west to Southern California and Baja California.

Desert Willows are found in desert washes in the wild, and need just enough water to keep them blooming throughout the warmer months.

If you’re looking for a smaller, flowering shade tree for your yard in AZ, then consider the Desert Willow.

Shelter From The Desert Sun

The harsh sun of Arizona means that if homeowners want to enjoy their gardens or outdoor space, they will likely need some form of shade to keep them comfortable.

Fortunately, the different planting and hardiness zones of Arizona means that the homeowner has a range of different shade trees to choose from to suit both their micro-climate and aesthetic preferences.