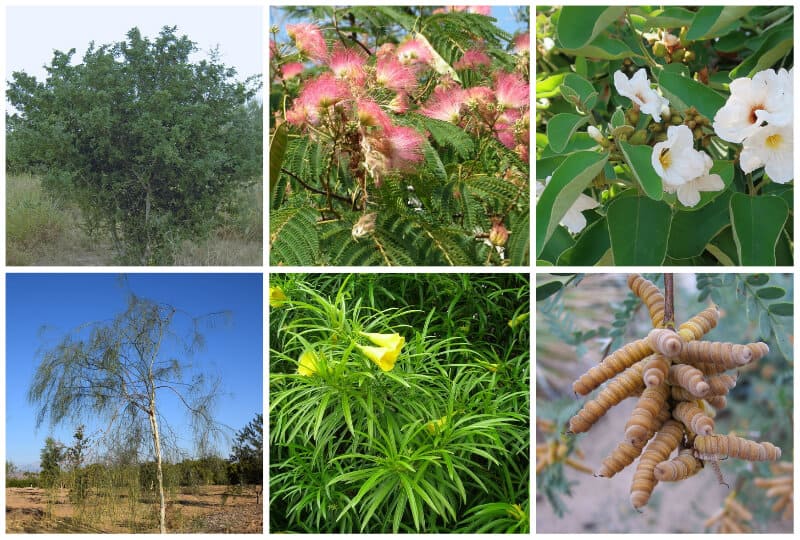 A maxim when planting trees is the right tree in the right place.

Failure to abide by this law can give you more work and hassle in the long run by keeping something there that isn’t best suited for the space.

The Arizona climate provides challenges for home gardeners in terms of scorching summer temperatures, water scarcity, and occasional frosts; don’t compound your problems by planting a tree that’s too big for your yard.

Regardless of whether you’re in the cooler uplands of the state or the low-lying desert, planting the right size tree for your yard will help ensure your long-term success of your garden project.

Let’s look at some small trees for Arizona backyards.

Anacacho Orchid Trees have paired, butterfly-shaped leaves, and beautiful white or pink flowers that resemble an orchid. Unlike many small trees suited for desert climates, it’s thornless. It functions well as a patio tree in warm areas or micro-climates because of these attributes and is often sold in a shrub-like form for this purpose.

To keep it as a small tree, prune early on. It often does well planted on the south side of buildings protected from cold winter winds.

It’ll appreciate some shade when temperatures are above 100 Fahrenheit. The Anacacho Orchid tree is both heat and cold tolerant. The nectar-rich flowers attract many butterflies and bees and are an important food source.

Cascalote grows as a small tree or large shrub with a low branching habit and is evergreen to semi-deciduous. The branches and trunk are covered with heavy thorns, with bipinnate leaves divided into pairs of 8-10 rounded leaflets.

Long and arching pannicles of lemon-yellow flowers appear above the foliage in late fall to early winter when most other species are dormant. The bloom contrasts attractively with the dark-green foliage.

The stems are dark brown and thicken over time to give the tree a vase shape as it matures. Seasonal pruning can keep it as a small shrub. They can be used as a background tree, in groups to highlight the blooms, or as an accent. Hummingbirds and butterflies frequent the flowers.

Native to desert washes, mesas, and slopes of southern Mexico they are adapted to long periods of heat and drought and as such can survive on little supplemental irrigation. Plant in full sun.

The Palo Blanco is a small to medium-sized deciduous tree with an upright and open branching character. Tiny green leaves are attached to petioles 6-10” long that droop over thin branches.

Creamy white flowers appear in late spring and sporadically throughout the year, and are followed by flattened seed pods 4-6” long.

The Palo Blanco is a native of Sonora, Mexico, and has become popular in recent years in Southwestern landscapes, especially in courtyards and small spaces.

The weeping habit, delicate branching, and exfoliating bark all add to the Palo Blanco’s appeal. It serves as an effective visual accent alongside agave, cacti, and rocks or boulders.

The Palo Blanco is tolerant of all-day sun, rocky, clay, and sandy soils and will grow with little water.

The screwbean mesquite is a flowering small tree or large shrub native to parts of the southwestern USA and northern Mexico. It has long slender branches with light brown bark and short, straight spines, and eye-catching screw-like pods.

The Screwbean Mesquite usually has a vase-shape, is multi-trunked and has dark gray/green deciduous foliage, and narrow clusters of pale-yellow flowers.

It’s found along streams and valleys in deserts, particularly in damp, saline soil, so whilst it is drought tolerant, it will appreciate seasonal flooding.

The Texas Ebony is mostly evergreen, and its dark green foliage lends an almost tropical feel to the landscape. The leaves are twice pinnate and borne off spiny branches, which make it difficult to maintain when young.

Once mature, it’ll need little upkeep and makes up for the scratches caused earlier. White blooms are followed by flat seed pods 4-6” long which persist through the winter.

The Texas Ebony is up there with the most attractive trees in the Southwestern landscape, and even provides visual appeal when bare, due to the twisting, zigzag branches and gray bark.

Until mature or pruned it may look brush-like. It’s beneficial to native wildlife and grows best in sandy, dry to moist soils, provides good shade, and is extremely drought tolerant.

Flowering Season: Late spring and intermittently through the summer

The Yellow Oleander is a small tree or large shrub which is heat and to a lesser degree cold tolerant. The flowers are bright yellow, funnel-shaped with 5 spirally twisted petals followed by globular, somewhat fleshy fruit, that turns black when ripe. It’s also trained into a hedge by many landscapers and homeowners.

The Yellow Oleander will bloom almost the whole year round. Whilst it does have some drought tolerance, it’ll do best with some extra irrigation during the hot and dry parts of the year in AZ. All parts of the plant emit a milk sap (latex) that is extremely poisonous, especially the seeds.

The Chocolate Mimosa is a small, beanless mimosa. It’s a fast growing tree with an umbrella-like canopy that erupts with fern-like, bronze-green fronds in the spring. Summer sees the chocolate mimosa show off clusters of pink and puffy scented blooms.

The foliage turns a deep and enticing chocolate color in the summer and remains as such until the autumn. The modest size and spread of the Chocolate Mimosa make it suited for those in AZ with smaller yards but still want an attractive tree with seasonal interest.

The Chocolate Mimosa grows well in moderately fertile, well-drained soils. Water deeply in the first two growing season to establish an extensive root system, then reduce the frequency. Whilst it has some drought tolerance, it will need water during the hot and dry periods.

The Texas Olive is a small tree or large shrub with large, soft, dark leaves, and flamboyant white trumpet-shaped flowers with a yellow throat. It’s sinewy trunk gains in attractiveness as it ages. Whilst it won’t tolerate cold winters, it’s drought tolerant enough in its range to need no supplemental irrigation.

The fruit is enjoyed by birds, small mammals and cattle, and butterflies enjoy the flowers. The Texas Olive prefers full sun and well-drained soil, and needs mild winters. If you’re looking for a small tree that’s valuable to wildlife in your AZ backyard, then consider the Texas Olive.

Flowering Season: Year round but most actively from late spring to early summer

Consider planting the native Kidneywood if you have a small space in your yard you want to fill.

It’s small size and the fact that it’s thornless, easy to clean and maintain makes it suitable as a patio tree. Its lacy canopy of fine foliage is a delight to behold, and provides a good overstory for grasses, succulents or small flowering shrubs.

Small white fragrant flowers perfume the air in the summer time and draw in native butterflies and other pollinators. Whilst a multi-trunked shrub in the wild, pruning can easily transform the Kidneywood into a single trunked tree.

The kidneywood is both cold and heat deciduous but will retain its leaves in a sheltered spot. It can reportedly be grown in any well-drained soil.

Prized for its spreading vase-like canopy and sweetly scented blooms, the Sweet Acacia is a semi-evergreen multi-trunked small tree or shrub.

It’s stems zigzag and are armed with sharp thorns and are covered in feathery, finely divided leaflets of a soft green color. In warmer areas, the leaves will remain on the tree throughout the year provided the soil doesn’t dry out too much.

Tufts of golden-yellow flowers appear in late winter to early spring and then sporadically after a new flush of growth, providing a lasting floral display for your yard. The flowers are followed by seed pods 2-3” long.

The Sweet Acacia is drought, heat, pest and salt tolerant once established and makes a good barrier plant due to its thorns, as well as nesting cover for wildlife.

Grow in full sun to partial shade, in most loose, dry to medium well-drained soils. It won’t tolerate heavy clay or wet soils

To ensure the longevity of you garden, be sure to plant the right tree in the right place. Find out which tree works best in the planting zone you live in. Here is our full list of Arizona planting zones to look at.

Ill thought out plantings can cause homeowners headaches down the line.

Examples include when large trees are planted in small spaces and require constant pruning to keep them within boundaries, and away from neighbors yards, roads and sidewalks.

Avoid yourself hassle down the line and plant small trees suitable for AZ’s climate if you have a smaller garden.