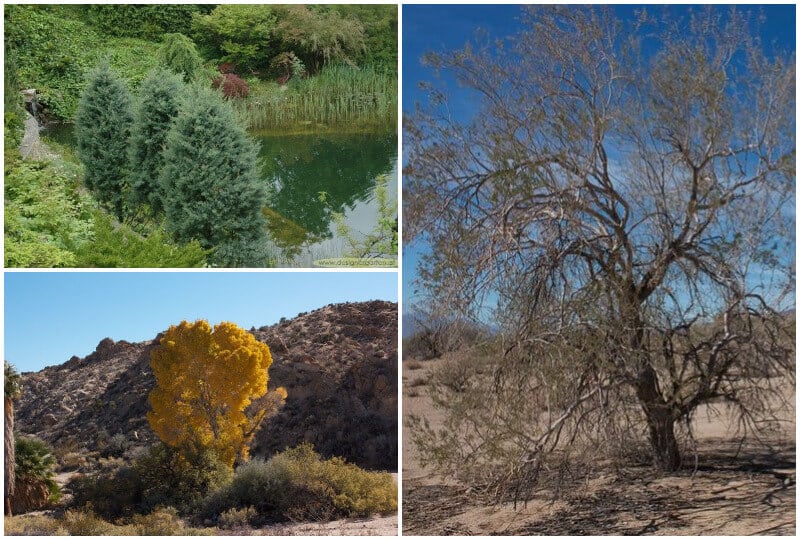 Arizona is the sixth-largest state in the USA, surrounded by mountain ranges, plateaus, river basins, and deserts.

This wide difference in landscapes means there are a corresponding range of climates.

This is reflected in Arizona’s USDA growing zones which extend from the chilly zone 4b to the warmer 10b.

Arizona hosts a range of native trees, from true desert dwellers in the south of the state to Pines and Firs in the mountainous uplands of the north.

Planting native trees is a generous way to give back to the environment you live in.

The star-shaped leaves are alternate and simple, with 3-5 lobes, green above and fuzzy below and are between 4-9” wide.

The bark is an attractive grey/green when young. With age, the bark starts to exfoliate in pieces, revealing a white inner layer. The fruit is four-sided with a basal tuft of long hair.

It’ll grow in well-drained clay, loam, or sand in slightly acidic or alkaline soil. The roots are good at binding soil and will prevent excessive erosion.

The Arizona Cypress is native to the interior west of AZ and has either a conical or open, spreading canopy. It’s suited to regions between 3000 and 6000 ft elevation.

It’s both heat and drought-tolerant and is good at halting erosion. Plant in groups as a windbreak or on their own as ornamentals.

The Arizona Cypress develops a rough, shedding brown/grey bark. It produces dark reddish-brown cones that ripen after the second year but will persist on the tree for many years.

The Arizona Cypress will grow in acidic, alkaline, sandy, loamy well-drained soils. It often grows pyramidal in shape and the needles are highly aromatic.

The Fremont Cottonwood is a fast growing tree with a rounded crown that is often broader than it is tall. It’s suited to northern parts of AZ with an altitude between 4,500 and 6,000 ft.

The leaves are broad and triangular, 2-4” long and 2-3” wide. The bark is smooth and whitish when young, becoming gray and furrowed with age. The flowers are long drooping catkins that appear from March to April.

The Fremont cottonwood will grow in free-draining sand, clay, or loam in alkaline soil. Be sure to plant away from foundations, plumbing, and walkways.

The Arizona Walnut is a deciduous tree with a rounded crown. It often has a forked trunk, spreading branches, and a distinct walnut aroma. The bark is dark and deeply furrowed and ridged, and the twigs are gray.

New growth is an attractive reddish-brown. The leaves are up to a foot long with 4-8 leaflets with a single leaflet at the tip of the margins.

The fruit is spherical and in between the size of the black walnut (Juglans nigra) and little walnut (Juglans microcarpa). The small walnuts are gathered locally where the tree grows, at elevations between 4,500 to 6000 ft in AZ. The Arizona Walnut will grow best in dry rocky soil.

The Rocky Mountain Juniper is native to areas of Arizona above 6000 ft. It has a somewhat rounded crown often with several main stems.

Juvenile foliage consists of white-coated, pointed needles, whilst mature foliage ranges from light green to dark-bluish. The cones are round and dark blue and are covered with a whitish blush and ripen in the second year.

The narrow crown of drooping foliage provides superb ornamental value, with several different varieties available, each with different leaf colors and forms. The wood and needles are also aromatic, and wildlife are fond of the ‘berries.’ Their native range is on rocky and sandy hills/mountainsides.

The Coconino National Forest of Arizona hosts the largest stand of Ponderosa Pines in the world. Most of these occur at elevations of between 5,500 and 8,500 ft on the Mogollon Plateau in Arizona.

The Ponderosa is a large and straight trunked tree with a wide-open cylindrical irregular crown, which flattens out on older trees as lower branches die off.

The bark is a dark red/brown/ black on younger trees and turns to a scaly, brown russet color on older trees. The irregular fissures on the bark make it fire-resistant. The needles are dark-green/gray, yellow, or orange and usually occur in groups of three and more rarely two or five.

The Pinyon Pine is a small, spreading bushy tree with a rounded, irregular crown. It’s native to areas of Arizona above 6,000 ft elevation. If you want a pine tree that doesn’t reach the heights of some others in this species, then consider the Pinyon for your AZ yard. It’s an extremely water-efficient tree, surviving on 15 inches or less of annual precipitation.

The Pinyon Pine has yellow/green needles about 2” long that remain on the tree for 8-9 years. The small cone resembles a small rose and contains edible pine nuts inside. Pinyon Pines are slow-growing, often with a crown as wide or wider than it is tall.

Pinyon Pines grow in dry soil and require little-to-no maintenance. They do best on dry hillsides below 7,500 ft. Whilst drought-tolerant, extreme drought can cause susceptibility to the Pinyon Ips beetle, so some irrigation is advised.

The Alligator Juniper can easily be recognized by its bark, which is dark, furrowed, and checkered into plates. It has a rounded to broadly pyramidal crown.

The scale-like, dark blue/green foliage is fragrant and the copper-colored fruit adds further appeal to the landscape. The Alligator Juniper is one of the largest Junipers and is often used for fuel and fence posts. New shoots will appear at the base of cut trunks.

The fruit is eaten by birds and other wildlife. The Alligator Juniper is native to AZ generally in areas above 6,000 ft in open rocky areas and slopes.

According to Desert Museum, the Desert Ironwood’s native range closely matches the Sonoran Desert and is one of several woody legumes that inhabit desert washes and hillsides. It’s considered one of the most ecologically and economically important species of the region, being a nurse species for many other types of native flora and fauna.

The Desert Ironwood is a member of the pea family, and its leaves and flowers resemble the common pea. It’s a slow-growing single or multi-trunked tree. The foliage is blue-green, leathery, oval, and develops a widespread upon maturity.

The bark is smooth and gray on young trees and wrinkles as it ages. Early to late spring sees clusters pink/white of pea-like flowers emerge. After the flowers, flat brown seed pods emerge, which are a valuable food source for animals.

The White Thorn Acacia grows in Southern Arizona in floodplains, streams, rocky hillsides, and mesas, generally at elevations between 2,000 and 6,000 ft. It’s a woody, upright, leguminous tree with a coarse, furrowed and grooved bark when mature.

The leaves are bipinnately compound and the twigs are zigzagged, and newer growth has a reddish color, whilst older growth is grayish brown.

The Netleaf Hackberry is a native of the desert southwestern portion of the state in open woodlands, thickets, and near river banks and streams in full sun to part shade. It is a small tree with a short trunk, wide-open spreading canopy, and crooked-to-graceful branches.

The leaves are alternate, pinnate and simple, leathery and 2-4” long, dark green, and ovate. The light bark is smooth at the margins and unequal at the base. The fruit has a ¼” diameter and has dull red color.

The Netleaf Hackberry will grow in a variety of moist soils; sandy, sandy-loams, medium clay, clay-loams, and caliche types. It provides food for at least 10 types of native birds.

The Screwbean Mesquite is a desert Southwest native, with a vase-like habit, long slender branches, and an open canopy of bluish-green, feathery leaves. The leaves are twice compound and up to 3” long and the twigs are armed with thin thorns up to 1” long.

An explosion of flowers appears on short clusters and are thoroughly enjoyed by bees. The flowers are followed by delicately coiled clusters of seed pods 2” long and are valuable forage for wildlife.

The Screwbean Mesquite naturally is a shrubby tree and can be used in borders or as a fence. Pruning can train it into a small tree. In this instance, light shade would be preferable.

Planting natives is the easiest way to ensure success in your environment as the species will be well adapted to grow there and as such should need little to no care once established.

Whether you’re in the cooler uplands of AZ or the low-lying deserts, there are plenty of native species that can provide food and habitat for wildlife and thrive in your location.