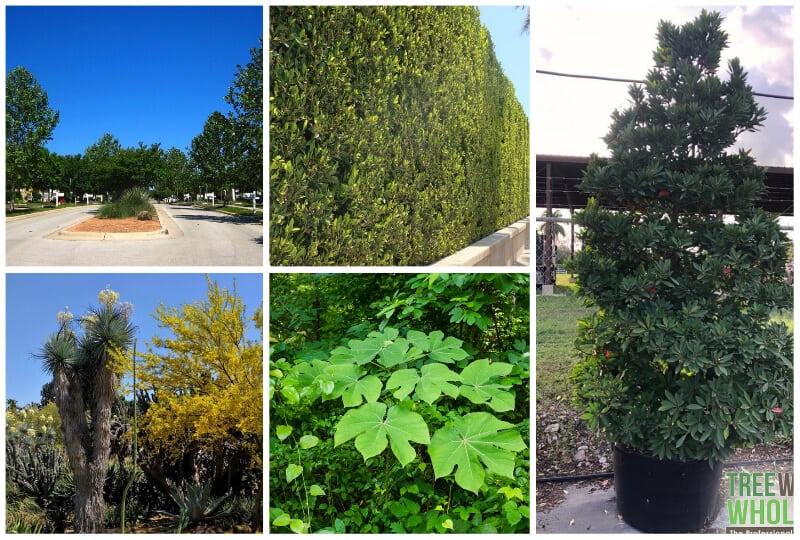 Arizona is a land of contradictions.

Whilst the images that come to people’s minds when they think of the state are often barren expanses of low-lying deserts, saguaro cactus, and hardy shrub life, according to Britannica more than half of the state lies at least 4 000 ft above sea level.

This variety in landscape means the state offers a wide range of evergreen species for you to grow.

The Bonita Ash is a beautiful and practical tree for the Southwest. It’s a fast-growing deciduous tree that will block out the sun in the summer and let in the warmth in the cooler months.

Despite being a fast-grower, the Bonita Ash has strong wood and won’t snap in strong winds. It’ll withstand temperatures as low as 0 Fahrenheit.

The canopy is lush, and the grey-green leaves turn a shocking yellow in the fall. Bonita Ash are all male trees, so provide no mess in the way of seed pods.

They require little pruning, maintenance, or water once established and thrive in full sun. For places such as Phoenix where you need a fast-growing shade tree the Bonita Ash is a great choice.

The Chinese Elm is a fast-growing, erect tree native to China, Japan, and Korea. It’s tough and durable and transplants easily. The bark provides winter interest as it exfoliates to reveal random spots of dark green, orange and brown.

The Chinese Elm is adaptable to many kinds of soil types and prefers full sun to partial shade and is salt tolerant. It’s resistant to Dutch Elm Disease as well as urban pollution. There are many cultivars available in nurseries, each with varying characteristics.

The Evergreen Pear is a favorite around Arizona and grows as a multi-stemmed shrub unless trained into a single-stemmed tree.

Late winter to early spring sees the evergreen pear produce an abundance of white flowers and the glossy green leaves remain evergreen throughout the year in areas that don’t experience sub-zero temperatures.

The evergreen pear is tolerant of heat, pollution, poor soil, and other adverse conditions. It’s extremely tolerant of pruning and a group of them together can be trained as a fence. Plant in full sun, as shade can increase the chances of leaf disease for pears.

The Mexican Sycamore is deciduous and has an upright and rounded crown. It’s adapted to most soils including alkaline soils. The sheer veracity of this tree, in terms of its mature size and aggressive roots system, mean you should avoid planting near buildings, structures, or roads where it may cause a disturbance if left unchecked.

If you’re looking for a fast-growing, park-style shade tree, then the Shamel Ash could be for you. The sheer size of it on maturity may make it unsuitable for smaller yards. The thick trunk and full canopy make this a favorite fast-growing shade tree for low-lying desert areas of AZ and California.

The large leaves and wide canopy provide a beautiful contrast to any landscape, and coupled with the quick shade it can provide makes this a popular choice for homeowners. It’s also easy to take care for, being drought tolerant, and requiring little water once established.

The result is vibrant yellow flowers, a brighter green trunk, and thornless branches. The multi-trunked shapes of these trees provide architectural interest to almost any landscape.

The Museum Palo Verde is fast-growing, more vibrant, and less messy than others in its species. They love full sun, are drought-tolerant, provide good shade, and are suited to the climate and soil type of much of the state.

The Weeping Willow reaches a height of 40 ft much faster than many other trees, and its shape and texture make it a standout in any landscape. It’s easily recognized by its long hanging branches which sweep the ground if left unpruned.

The leaves are green above and gray/green below. The Weeping Willow will grow in either full sun or partial shade, and whilst it typically grows near water, it does have some drought tolerance once established. Acidic, alkaline, loamy, rich, sandy, and clay soils all suit the Weeping Willow.

Ficus Indian Laurel is popular throughout the low-lying desert areas of AZ for its fast-growing, dense evergreen habit, making it popular as a privacy tree. They grow as single or multi-trunked trees and can take full sun. Ficus Nitida will provide a dense canopy with thick leaves, that will protect your yard from noise and unwanted views.

They can take heavy pruning so can be shaped into whatever size fits your landscape and design. They can also be shaped for topiary. For optimal results, consider planting a row of them on the border of your yard.

Their roots, like many Ficus, can uproot sidewalks, and disturb structures, and septic tanks, so be sure to bear this in mind when planting. The smaller you keep the tree, the less problem you’ll have in this regard.

The Chinese Parasol Tree is a fast-growing, broadleaf deciduous tree with large attractive leaves and stems. The smooth bark is vivid in color, and its crown is small and round., The leaves are simple, alternate, and palmately lobed and can grow 8-12” across, allowing the Chinese Parasol to cast dense shade.

They can tolerate many soil types provided they are well-drained and can grow in either full sun or partial shade. Early summer sees long green/yellow pannicles of flowers emerge, followed by unusual seed pods.

The Japanese blueberry is a striking, fast-growing evergreen broadleaved tree or shrub. Its ability to withstand cold temperatures makes it a viable alternative to `Ficus nitida, or Prunus caroliniana for gardeners in colder parts of AZ.

Its dense foliated branches leave hardly any room for gaps, so it functions spectacularly as a privacy tree or hedge if planted in a group.

Left to its own devices, the Japanese Blueberry Tree provides a rounded head that creates good shade. The leaves emerge a rusty shade of orange, turning deep green when mature and eventually red before falling off, which happens infrequently.

Small lantern-shaped flowers emerge before turning into blue berries which provided a beautiful contrast with the odd red foliage.

The varying climates and many planting zones of Arizona allow the home gardener a wealth of different fast-growing species to choose from.

Those in the warmer, low-lying subtropical areas have the greatest amount of choice to draw on, but homeowners at higher and cooler altitudes also have their fair share of fast-growing species to pick from to provide natural interest in the landscape throughout the year.