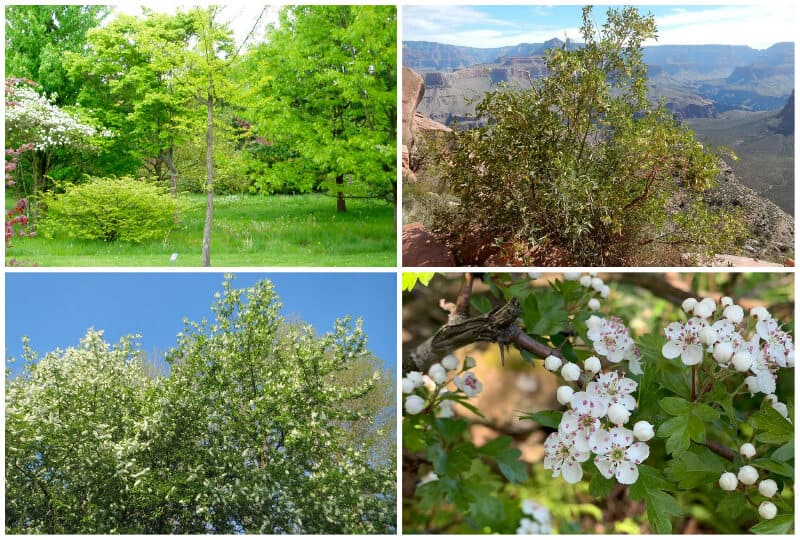 Colorado is a state known for its stunning natural beauty.

The variance in the topography of the land means that many different types of trees can be admired in the wild, where the planting zones of Colorado extend from zone 3 to 7.

This variety of climatic conditions allows the home gardener to plant many different species in the home landscape.

Even if you’re strapped for space, there are still plenty of species of trees you can plant in your yard.

9 Small Trees To Grow in Colorado

The Pagoda Dogwood is a small tree or shrub with a spreading crown of horizontal branches. The branch ends are upturned and the bark and twigs are green to reddish/purple.

The common name of ‘Pagoda Dogwood,’ refers to the flat-topped crown which has a horizontal branching pattern. The leaves are alternate rather than opposite as is common on most other dogwoods. The bitter berry-like fruit are consumed by wildlife in the fall and winter.

The Toba Hawthorn is a compact rounded tree with short horns along the branches. It’s a superb choice for small spaces as it offers interesting foliage, blooms, and fruit. It provides a focal point or accent to the landscape.

The flowers emerge in late spring and are white with a pink blush. They’re followed by small red fruit.

The Hawthorn ‘Toba,’ will adjust to most soil types with good drainage and grows best in full sun.

The Wafer Ash is an aromatic small tree or shrub, usually with a slender and crooked trunk bearing ascending branches. It works well as an understory tree. The crushed bark, twigs, and foliage have a musky, lemon-like aroma that many find disagreeable.

The leaves are dark green in the summer and turn yellow in the fall. Small greenish/white flowers emerge amongst the leaves around April. The fruit is a distinct wafer-like samara with broad wings.

The bitter fruit used to be used as a substitute for hops in brewing beer, hence the common name of ‘Hop Tree.’ The Wafer Ash will grow in sun or shade, in moist, wet, or dry conditions. The sweet nectar attracts many species of butterflies to the garden.

The Pekin Lilac is a large multi-stemmed shrub that can be pruned into a small tree with an irregular, open, and loosely symmetrical growth pattern. Lilacs need a certain amount of chilling hours to flower, making them suited to most areas of CO.

The flowers are small and creamy white and are borne on panicles in late spring to early summer. The mature foliage is dark green, ovate/ovate-lanceolate, whilst the bark is reddish-brown.

The Pekin Lilac grows in full sun to partial shade and grows at a medium rate. The Pekin Lilac attracts butterflies and provides food and shelter for caterpillars and small birds.

The Newport Plum is a small-to-medium-sized deciduous tree with a rounded crown. It draws the eye in whether in bloom or not, with it’s dark purple foliage and twigs.

The serrate/eliptic leaves emerge bronze-purple in the spring, turning dark reddish before changing to darker shades of red in the fall.

Deeply fragrant, white/pink blossoms bursts forth all over the branches in mid-spring. They give way to small edible, purple fruit which are enjoyed by wildlife.

The Newport Plum will grow in full sun to partial shade but best color is produced in full sun. Plant in moderately fertile, well-drained soil.

The Mayday Tree is native to Northern Asia and Europe, and is one of the first trees to come into leaf in the spring.

The leaves are followed by pendulous clusters of tiny, fragrant white blooms. The Mayday Tree works well as a focal point in the landscape and can provide shade and living structure to the landscape.

The fruit is dark colored and has a very astringent taste but are reportedly very high in antioxidants.

Plant the Mayday Tree in full sun in well-draining sun away from any standing water.

The Russia Hawthorn is a small drought tolerant tree once established. In spring, small glossy leaves emerge and are followed by clusters of bright white flowers.

By August, the flowers give way to dazzling red fruit. The leaves turn yellow in the fall whilst the fruit turns into shades of rust.

The Maidenhair Tree is a slow-grower that’s pyramidal when young and becomes open and broad with age. It has a large branching structure. It’s part of the gymnosperm family and is considered to be one of the oldest living tree species around today.

Female trees bear a fleshy, bad-smelling fruit the size of a small plum. To avoid the smell, male trees are more commonly planted instead of females.

The leaves of the Maidenhair Tree are fan or triangular shaped and are bright-green. Plant in full sun in moderately moist soil, but it’ll also adapt to sandy conditions. Protect trees from strong winds to avoid snapping branches.

Plant the European Mountain Ash in sun to partial shade. It doesn’t do well in compacted soils in urban environments.

The adventitious roots make it useful in mitigating soil erosion, and the fruit can be used to make preserves and for other culinary purposes. They are also an important food source for birds in the winter.

A Tree For Every Space

No matter the size of your yard, or the soil or moisture conditions, there’s a tree to suit your conditions.

Whether you have a tight and narrow area you want filled with greenery and life or a patio you want planted, there are plenty of small sized trees for you to choose from, regardless of where you live in the state of Colorado.