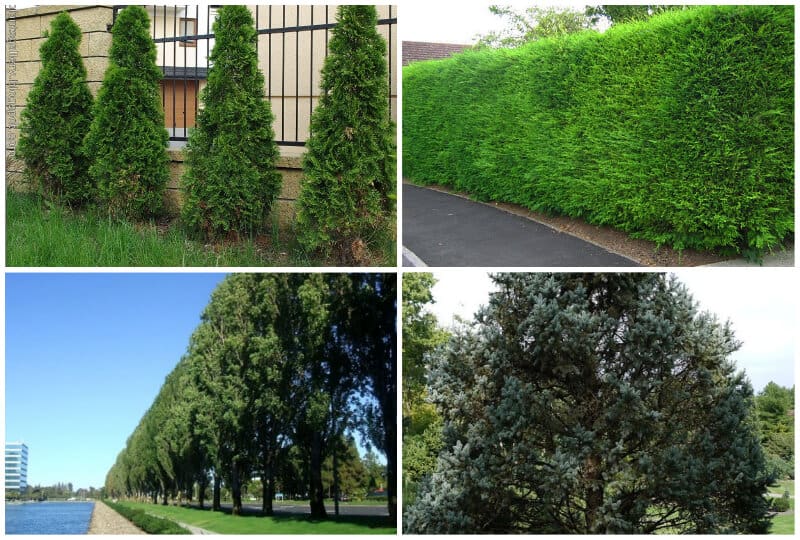 Trees serve many functions, both ecologically and in the landscape. One of these functions can be to provide privacy by creating a living wall that blocks outsiders from peering in.

They can also create a sense of security for those whom they surround. Colorado’s USDA zones extend from zone 3 to 7 and so offers the homeowner a wealth of different privacy trees to choose from.

The Eastern Redcedar is an ancient tree indigenous to the United States. It has a dense pyramidal shape which makes it excellent for windbreaks and privacy screens. The evergreen foliage is scale-like and is a medium shade of green.

It produces a rounded fruit that’s gray or bluish-green and ¼’ in diameter that resembles a berry but is a fusion of cone scales. They attract cedar waxwings, mockingbirds, warblers, and juncos.

The American Arborvitae is an evergreen tree that can be either single or multi-trunked with a columnar or conical shape. Given space in an open environment, it’ll create a densely formed tree, whereas in a crowded space it’ll become slender and poorly branched.

The American Arborvitae (Latin for ‘Tree of Life’) will grow in moist, alkaline, well-drained soils. It can be used as a specimen tree or planted in groups to form a privacy hedge. It’ll tolerate heat and pollution provided the soil remains cool and moist.

The Leyland Cypress is a natural hybrid and one of the most popular privacy trees around the temperate world. It’s an evergreen coniferous tree with a wide, columnar, or pyramidal shape.

The scale-like leaves form opposite alternate pairs and form 4 longitudinal rows. They are green to bluish-green above and below and are arranged on long slender branches.

The Leyland Cypress is a fast-growing and adaptable tree that can easily be grown as a hedge provided it’s given regular pruning. Plant in full sun or partial shade.

The Spartan Juniper is a fast-growing evergreen that is suited to small or medium-sized yards or gardens where there isn’t enough space to grow some of the larger privacy trees.

In its natural form, the Spartan Juniper has a symmetrical pyramidal shape that rarely requires any pruning. As such it functions well as an accent tree in a formal garden as well as a windbreak, screen, or can be used for topiary.

The Spartan Juniper will tolerate heat, cold, drought, urban pollution, and poor soils and is a good choice if you’re looking for a small tree for your CO yard or garden.

The Needlepoint Holly is a dense evergreen shrub or small tree with lush foliage of simple, alternate dark green leathery leaves with a sharp point. Small white flowers appear in the spring and attract bees and pollinating insects.

When pollinated, these give way to clusters of bright red berries which ripen in the fall and persist through the winter, when they are enjoyed by birds.

The Needlepoint Holly is an excellent choice for a privacy screen, due to its fast growth rate, its ability to grow in almost any soil, and the fact that it requires minimal care and provides year-round seasonal interest.

The Colorado Blue Spruce is a native evergreen tree and is a popular evergreen tree around the United States in suitable locations. The crown is columnar and pyramidal. It features silvery, blue-green, 1- 1½ inch, stiff and sharp needles that are on show year-round.

When planted in a row, the Colorado Blue Spruce provides an excellent windbreak or privacy screen.

The Canadian Hemlock is an elegant tree that can be trained into almost any shape and works well as a screen when planted in groupings. It can be left to achieve its full height when it becomes a spectacular specimen with a pyramidal shape.

The foliage is feathery and deep green and forms horizontally on the twigs.

Small brown cones ½-1 inch long hang ornamentally off the branches. It provides habitat and shelter for many different kinds of animals. The Canadian Hemlock grows at a medium rate and is not drought tolerant. It’ll grow in well-drained sandy, loamy, acidic soils.

The Norway Spruce is the fastest growing spruce, making it ideal as a windbreak or as a privacy tree.

It grows in a pyramidal shape with drooping, graceful branches that are covered in deep, dark green ½ – 1’ long needles. The Norway Spruce yields cones that sit upright on the branch until fertilized, whereupon they point downwards.

The Norway Spruce can be planted on a variety of sites, in moist, acidic, loamy, sandy well-drained clay soils. It has some drought tolerance.

The Lombardy Poplar is a deciduous tree found throughout Europe, Northern Africa, and Central and Western Asia. It’s prized for its rapid growth, utility in retaining topsoil, and as a privacy tree and windbreak.

It has a broad, rounded crown. The bark is dark gray, fissured, and gnarled on mature trees. The leaves are alternate, simple triangular to diamond-shaped, dark green, and 3” long.

Privacy trees shield out unsightly views as well as prevent outsiders from peering into our homes and gardens. They can also serve as windbreaks and sound barriers if we live in exposed areas.

Fast-growing evergreen trees are often the best candidates for privacy trees, and fortunately, the state of CO is well-suited for their cultivation.