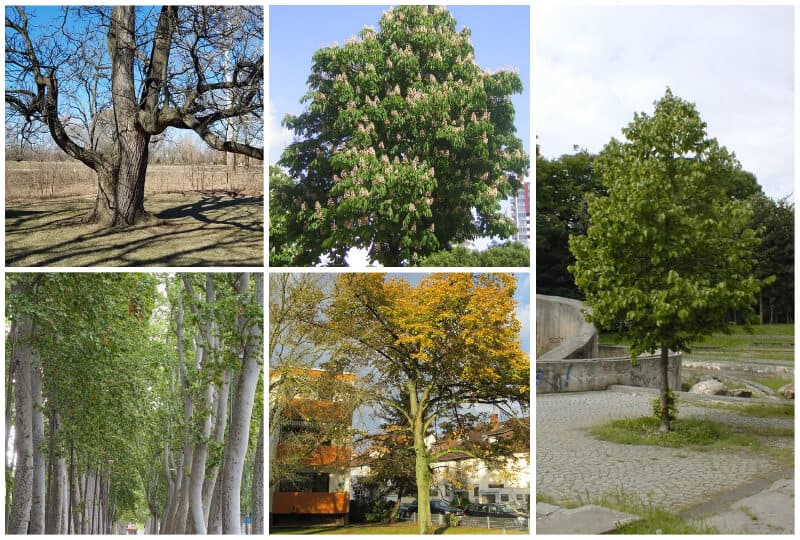 Deciduous trees seasonally shed their leaves. Winter-deciduous trees can make good shade trees as they can shade out the harsh summer sun, whilst letting light in during the winter months.

The fallen leaves can be used to improve your soil through composting and mulching.

The growing zones of CO extend from zones 3 to 7, so there’s no shortage of different tree species for you to choose from to plant in your garden or yard.

The Thinleaf Alder is a broadleaf, deciduous tree or multi-stemmed shrub with a rounded form. The bark is thin and gray-green, grayish-brown, or reddish-brown.

The leaves are alternate, simple, broadly ovate-oblong or elliptic, and muted green on both sides. Male and female catkins are produced prior to blooming, and expand before the leaves emerge in the spring.

The Thinleaf Alder is considered the most common Alder of the Rocky Mountains and can be found growing near water. Its presence is often considered an indication of springs or streams nearby. It’ll grow in sun or partial shade.

The Turkish Filbert is a deciduous tree with a pyramidal shape and a short trunk that supports dense horizontal branches. The growth rate is slow and the main branches have quite a small diameter relative to that of the main trunk.

The bark on older trees sometimes becomes ridged and cork-like and peels off to reveal the orange-brown inner bark.

The leaves are a lush shade of green and are usually 5 inches long and remain on the tree long into the fall when they turn yellow-green before being shed.

Female flowers are inconspicuous and measure 2-3 inches in length, whilst male catkins (which are more ornamental) are produced in early spring. These are followed by clusters of edible fruit which are enjoyed by squirrels.

The Turkish Filbert has been successfully grown in urban areas with air pollution, and poor and compacted soils.

The Ussurian Pear is a deciduous fruit tree and is considered the hardiest of the pears. It has a rounded and dense growing habit.

The foliage is glossy dark green in the summer and turns reddish-purple in the fall. The buds are pinkish/white and open to 1 ⅓ inch in diameter white flowers in late spring. The fruit is round and greenish-yellow.

The Ussurian Pear is a good choice for colder climates and is a great high altitude fruit tree to grow, being a native of north-eastern Asia. It can tolerate partially sandy or clay soils and does best with average moisture levels.

The Black Walnut grows around large areas of the United States and is the second most commonly grown walnut. It has a low-branching open crown that can spread as wide as it is tall.

In forests and commercial grows, it can reach 150 ft tall, but will likely be much smaller in the home landscape. Black Walnuts are also allelopathic, meaning they suppress some other plants’ growth nearby.

This fact, alongside their size and the difficulty in transplanting due to their deep taproot, will make them unsuitable for many yards, but those with enough space will be rewarded with a beautiful tree and plenty of delicious nuts to eat.

The Black Walnut has a medium-growing rate and is self-fertile, but requires wind for pollination. It’ll thrive in acidic, alkaline, sandy, loamy, rich well-drained wet and clay soils.

The Horsechestnut features a smooth pink/grey bark when young which develops large scaly plates with age. The leaves are palmate and contain 5-7 pointed, toothed leaflets, spreading from a central stem.

The flowers contain 4-5 fringed petals which are white with a pink blush in the middle. If pollination occurs, the flowers are followed by a spiky green husk with a reddish-brown seed inside.

The flowers are a rich nectar source for bees and other insects, whilst deer and other mammals feast on the seeds. Horse chestnuts can be grown as a shade tree, or street tree, but can be difficult to transplant due to their deep taproot.

The Northern Catalpa is a large deciduous tree with a narrow, oval crown. It has large heart-shaped leaves with an extended tip, shallow lobed margins, and large white to lavender-colored, bell-shaped flowers with frilly rims.

The flowers appear in heavy upright clusters on the outer end of the branches. They are white with a yellow streak in the middle and purplish spots inside.

The flowers are followed by a narrow seed-pod 18 inches in length which persists throughout winter. The Northern Catalpa requires partial shade and can be grown in moist, deep, rich soils. It’s fast-growing and not particularly drought tolerant.

The Littleleaf Linden has a pyramidal to oval shape and heart-shaped leaves that are lopsided at the base with saw-toothed margins. The leaves change from light glossy green to dark green to yellow throughout the year.

Clusters of fragrant yellowish flowers hang off a long stalk in the summer after most other trees have finished flowering, creating a great nectar source for bees and other pollinators.

The dense canopy makes the Littleleaf Linden popular as a shade tree, although it’s sensitive to drought and salt. The Littleleaf Linden will grow in acidic, alkaline, moist, rich, sandy, wet, and clay soils. Whilst it prefers moist conditions it doesn’t thrive in wet sites.

The American Sycamore is a wide canopied deciduous tree with an open crown of crooked branches.

The bark on older trees exfoliates to reveal a smooth white, inner bark. The leaves are broadly ovate and pointed, medium-to-dark green, and resemble maples. The fruit are globular and persists throughout early the winter.

The American Sycamore has the widest diameter of any native hardwood tree and is often planted as a shade or street tree. Plant in moist, sandy loams or silty clays.

The Ohio Buckeye is a medium-sized canopy tree with ornamental fruit and orange fall colors. The deciduous foliage is palmately compound. The branches bend towards the ground and then reach back upwards, which gives the tree a peculiar silhouette.

The blossom are erect and held at the end of the twigs and attract hummingbirds. The fruit is a nut held in a spiny open husk and is eaten by squirrels

Trees are the lungs of the world; without trees, we wouldn’t be able to survive. By planting trees, you’re giving back to your environment and the world at large. No matter where you are, there’s a tree suited to your local conditions.

Deciduous trees are constantly changing throughout the year and allow you to connect with seasonal changes. Wherever you’re situated in the state of CO, there’s a deciduous tree suitable for your garden.