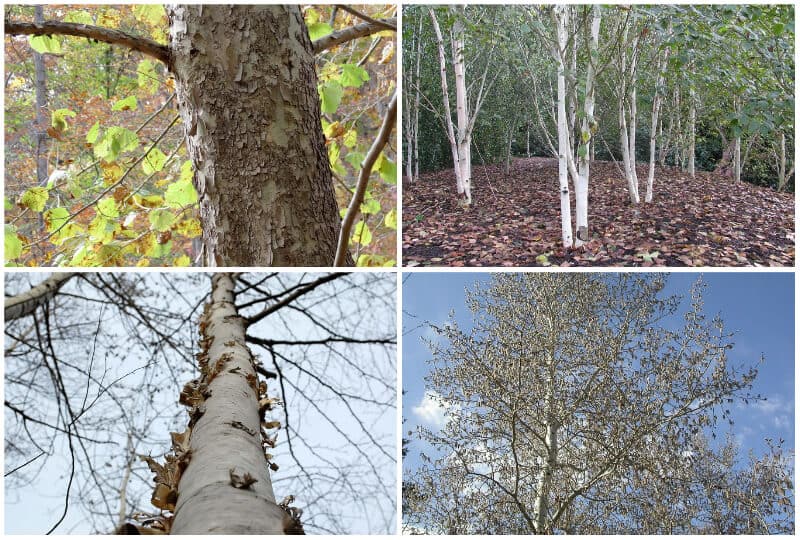 Trees can be appreciated for their leaves, flowers, or fruit. However, these features come and go with the seasons.

The bark on most trees remains constant for long periods of time. There are several deciduous trees that can provide year-long interest thanks to their showy white barks and fortunately the climate of CO is well-suited to their cultivation.

There are several explanations as to why some trees have white bark, with the most widely accepted one being to avoid sunscald and overheating.

The White Birch can be found across much of the Northern United States and Canada. The papyrifera part of the Latin name refers to how the bark exfoliates in large strips resembling paper.

The White Birch, for many, is the symbol of the North Country, planted not only for its white bark but also for its stunning bright yellow fall colors.

The simple leaves of the White Birch measure between 2-4” long and are medium green in color, and the double-toothed margins are arranged alternately. Green or brown catkins appear in the spring and are followed by smooth, small elliptical-to-oval seeds borne in between two wings.

The White Birch can be grown in some parts of CO, and prefer rocky or sandy, well-drained, acidic soil that remains consistently moist. White Birch trees don’t like when temperatures reach above 75 Fahrenheit, so may need afternoon shade in warmer summer areas of the state.

The European White Birch is a graceful medium-sized tree with thin, pendulous branches. The attractive bark matures to shades of silvery white with black markings.

Young trees have smooth barks, whilst the bases of mature trees become ragged with age. They grow in a pyramidal to oval-rounded shape, with toothed, ovate glossy leaves which turn yellow before being shed in the fall.

The Quaking Aspen is a medium-sized deciduous tree with a pyramid shape and a gently rounded crown. The leaves are finely toothed and dark green in shade, 3-7” long, and turn golden yellow in the fall. The flattened petiole in the leaves allows them to shake and dance in the wind.

The Quaking Aspen will grow in cool-summer areas of the state of CO, in rich, consistently moist well-drained soils.

The Himalayan Birch has a particularly stunning bark, which peels off in papery layers to reveal an almost perfectly white inner bark. The bark on young trees is pale brown before turning its eye-catching shade of white.

Himalayan Birches are fast-growing deciduous trees with an open pyramidal habit and gentle branching. The dark green leaves are alternately arranged, ovate a turn bright yellow before the winter.

The White Poplar is a deciduous tree with a wide-spreading broad crown and attractive foliage. The leaves have 3-5 lobes and are dark green above and white and downy on the underside.

This two-toned color is highlighted when the wind rattles the leaves. The bark is white and smooth in youth, becoming darker and more furrowed with age.

The American Sycamore is a large tree that makes a dramatic focal point on the landscape. Large green leaves grace the crown and measure up to 9” wide and are capable of growing up to 2 ½ ft a year. Small, yellow/red flowers appear in the spring.

According to FastGrowingTrees.com Sycamores never shed all their bark so aren’t technically white-barked, but nonetheless provide an attractive mosaic with their partial exfoliation. The bark starts out white and after 10-12 years begins to show signs of brown, making it prized for its winter interest.

Trees can be planted for a plethora of reasons, including to admire their beauty. White barked trees stand out against the rest of the CO landscape and make especially good accents against other evergreen trees in the vicinity.

The white bark will be most apparent in winter when other trees grown for foliage, or fruit have shed their leaves, extending the seasonal interest of your garden.

Before planting any tree, it is always a good idea to check the planting zone in Colorado that you live in to ensure that you are planting are tree that thrives in your area.