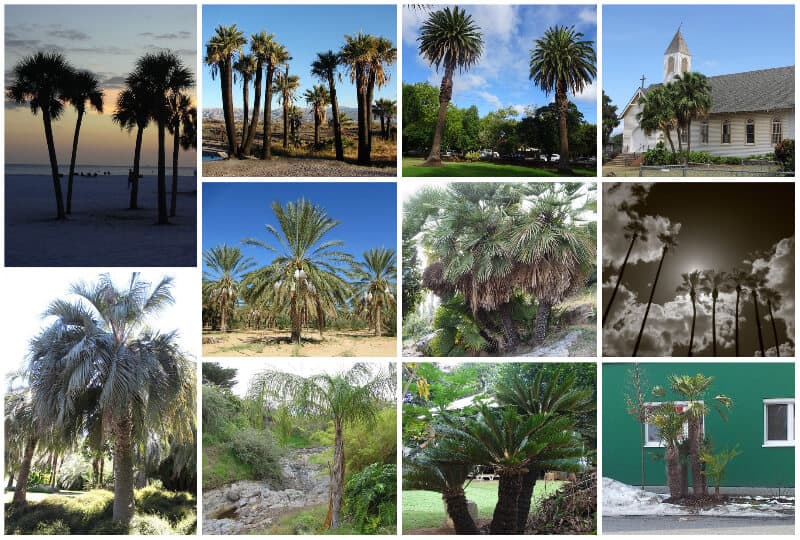 While Georgia may not be the first state you think of when speaking of Palm trees, many cold-hardy varieties do thrive here.

Georgia has a humid subtropical climate, with warm summers and relatively mild winters. The weather is greatly moderated by the influence of the Atlantic Ocean, which keeps Georgia’s hardiness zone between 6 and 9.

16 Beautiful Palm Trees To Plant or Admire in Georgia

The Canary Date Palm is a hardy palm that can grow throughout much of the Southern States. It features a bold, rounded crown with up to 100 arching feather-like fronds. Each leaf is up to 15 ft long.

Older trees feature large columnar trunks whilst in youth they have a pineapple shape, earning them one of their common names. Dead leaves leave a diamond shape on the trunk.

The Canary Island Date Palm is a species of palm tree that features creamy yellow flowers on dropping pannicles which are followed by clusters of yellow-reddish date-like fruit.

It’s drought and salt tolerant and can withstand a fair amount of cold but may suffer frond damage with sustained temperatures below 18 Fahrenheit. Plant in moist well-drained soils with average fertility.

The Cabbage Palm is a single-trunked evergreen palm with fan-shaped leaves that can reach 6 ft in length. Each leaf is divided into thread-like parts. The gray trunk is covered with the residue of old leaves which criss-cross over each other in a distinctive pattern.

The inflorescence extends beyond the leaves and contains a multitude of creamy white flowers in the late spring, followed by shiny black fruits in the summer.

The Cabbage Palm is both salt and wind tolerant and hardy down to 15 F and grows best in loam or sand. It’s the state tree of Florida and is displayed on the flag of Southern Carolina.

The Windmill Palm is one of the hardiest palm trees around, being native to subtropical and temperate mountain forest regions of China.

It reportedly can survive temperatures down to 10 Fahrenheit, making it perfect for anyone who wants to add some tropical spice to their temperate garden. The Windmill Palm features fan-shaped leaves 3 ft in length. The leaves produce fibers that cover the trunk and can be used to make mats, ropes, brooms, brushes, etc.

The Windmill Palm is dioecious, with separate male and female flowers, meaning you’ll need one of each if you want the ornamental flowers. The flowers are cream/yellow and are fragrant, whilst the fruit are small blackish/purple drupes.

Windmill Palms appreciate partial shade, so are a good choice for patios or container growth. They are also salt tolerant, making them suitable for seaside locations or urban planting, and will grow in any free-draining soil.

The Needle Palm is an extremely adaptable palm when it comes to temperature and soil type. It features multiple stems and sharp needles, slowly growing into a clump, making it useful for filling in blank areas. The needle-shaped leaves are glossy green with small flowers that can be either yellow, white, or brownish-purple and are followed by reddish drupes.

In the wild, the Needle Palm grows in shaded woods or slopes close to streams. Because of this, they can easily adapt to drought or wet conditions once established.

The Queen Palm is native to Southern Brazil, Northern Argentina, Paraguay, and Uruguay and is a popular tree in suitable parts of GA. It’s prized for its long graceful foliage and smooth trunk.

Dense, branched clusters of white flowers appear in spring and are followed by an edible fruit with a green covering, which you can peel away to reveal a fibrous husk similar to a coconut. The flavor is a mixture of plum, banana, and coconut supposedly.

The Queen Palm is fast-growing and cold tolerant, with Palmco stating it can tolerate temperatures down to 25 Fahrenheit, with some sources saying it can survive even colder temperatures. Plant in free-draining soil enriched with organic matter.

The True Date Palm is one of the easiest palms to spot in the landscape due to its tall and slender trunk and distinctive leaves. Date Palms feature 100-120 large, arching leaves capable of reaching up to 16 ft long. They are pinnate and divided into 150 sharp pointed leaflets.

Drooping pannicles of flowers appear on male and female trees. Female flowers give way to the large sweet juicy fruit. The Date Palm is one of the oldest cultivated fruits in the world and is a hardy tree capable of withstanding temperatures down to 25 Fahrenheit, where it’ll sustain some leaf damage. It’s also drought and salt tolerant.

Plant the Date Palm in free-draining soil in full sun. Sustained hot and dry conditions are necessary for fruit set and they don’t do well with high humidity levels.

The Dwarf Palmetto is one of the hardiest palms. It’s a small evergreen species, either trunkless or with a short trunk supporting petioles with 4-10 fan-shaped leaves that can reach 3 ft wide. They are blue/green/shiny dark green and are divided into 30/40 narrow segments.

Fragrant creamy white flowers appear on long inflorescence up to 6 ft long, which exceeds the leaf length. The flowers are followed by black/purplish/dark brown/black fruit.

The Dwarf Palmetto is both drought and salt-tolerant and is hardy down to 10 Fahrenheit without any damage to the foliage.

The Saw Palmetto is native to many of the southern states including Florida and also native to Georgia. It has a clumping growing pattern that will need to be pruned to keep it tidy. The toothed leaf margins are said to resemble a saw, giving the plant its common name.

The Saw Palmetto is commonly found in wet to dry flatlands. In Southern Georgia they can be seen growing en masse below pine trees. Whilst they prefer to grow mostly in full sun, they can be cultivated with success in most light conditions.

The Mediterranean Fan Palm is a fast-growing palm with multiple trunks. It’s a very cold-hardy species capable of tolerating down to 10 Fahrenheit. It’ll grow on nutrient-poor, dry, rocky, sandy soil and requires little care or maintenance.

In the wild, it’s typically an understory tree, where it grows in partial shade in woodlands, although it can also be grown in full sun, and even trained as a single-trunked tree by removing the basal suckers.

The Mediterranean Fan Palm is monoecious with male and female flowers found on the same plant.

The California Fan Palm is native to the deserts of the southwestern states and instantly adds a sense of calm and serenity to the landscape with its feathery foliage.

The leaves are fan-shaped with grey/green blades between 3-6 ft long, erect after emerging, later arching and spreading out. The dead leaves fold down to cover the trunk, giving the palm a ‘beard,’ if left to its own devices. These can be pruned for a tidier look.

Creamy white, tubular flowers appear in the summer on large pannicles up to 15 ft long followed by black, pea-sized fruit. The California Fan Palm does well in hot and dry conditions but doesn’t have much cold tolerance, meaning it won’t survive Atlanta’s winters. It will survive short periods down to 23 Fahrenheit.

Pindo Palms are hardy and can be found up the eastern coast up to the Carolinas. They are slow-growing species that can eventually form a thick trunk capable of attaining a diameter of 1 – 1.5 ft. The crown is dense and covered in large arching fronds.

Flowers can be either yellow, red, or white and occur with a ratio of two males per female. The fruit is light orange/red and can be eaten fresh, or cooked into jams or jellies, and the seeds can be roasted and drunk.

The Pindo Palm will grow in full sun or partial shade but are slow-growing so patience will be required. Plant in any free-draining soil. The Pindo Palm is moderately salt tolerant.

The Mule Palm is a hybrid between the Pindo Palm (Butia capitata) and Queen Palm (Syagrus romanzoffiana). Whilst it is a rare palm, it embodies the best qualities of both species. It’s cold, drought and wind tolerant.

The Mule Palm can be identified by its heavy, thick trunk covered with old leaf bases. The leaves are dark green and arching, emerge straight from the trunk, are pinnate, and can measure from 5-10 ft long with 80-150 leaflets.

The flowers of the Mule Palm emerge from a branch inflorescence and are small and pink. According to Urban Palms, it is a great cold hardy palm and is capable of withstanding very low temperatures. It prefers moist soil but will tolerate drought once mature.

The Chinese Fan Palm is an attractive medium-sized palm with a soft and graceful appearance, a slender trunk adorned with up to 50 emerald green textured palmate leaves between 3-6 ft long.

Each leaf is divided into long thin lobes that droop down at their tips towards the ground, lending the canopy a fountain-like appearance. The trunk is smooth, gray/brown, and clean, as the leaf stubs are shed along with the dead leaves.

The flowers of the Chinese Fan Palm emerge on large sprays, up to 6 ft long, but are often obscured by the canopy of leaves. The flowers are followed by dark blue/ blue-gray fruit. It tolerates dry conditions and is relatively salt tolerant, and can withstand temperatures down to 15-20 Fahrenheit, with some leaf damage.

The Mexican Fan Palm is a fast-growing palm with a columnar trunk and small rounded crown adorned with fan-shaped leaves that measure between 3 and 5 ft. the pinnate leaves feature slightly drooping tips. The dead leaves fold against the trunk and form a thick cover. The base tends to swell, which is how you can tell it apart from the Californian Fan Palm (Washingtonia filifera).

Small creamy white flowers are produced on hanging sprays up to 10 ft long and are followed by blackish/blue pea-sized fruit. The Mexican Fan Palm is salt and wind tolerant and can be planted along the coastline. It can handle brief spells down to 5 Fahrenheit. Plant in well-drained soil.

Whilst not technically a palm, the Sago Palm is a palm-like evergreen tree with arching pinnate leaves up to 5 ft long on an upright trunk. Each leaf is covered in numerous spine-tipped green leaflets which curve in on themselves at the tips.

They are dioecious, so females will need a male tree nearby to produce fruit. Male plants produce an upright brownish/gold inflorescence, whereas females produce dense bunches of reddish fruit.

The Sago Palm is resistant to drought and salt and can withstand short periods at 15 Fahrenheit. Grows best in moist, well-drained soil in partial shade.

The Coontie Palm is a member of the cycad family, and will happily grow in Atlanta. It’s a woody clumping perennial with pinnate leaves up to 3 ft long, and although technically not a palm, has a palm-like appearance.

Blue jays, mockingbirds, and other small birds and mammals enjoy feasting on the seeds. Coontie is drought tolerant, requires little care, and will grow in dry sandy soil or sandy loams.

Bringing The Tropics To GA

Palm trees are a symbol of warm tropical climes and many people want them around to add a lush and luxuriant feeling to their home landscape. Fortunately, the climate of GA means the home gardeners can enjoy many different types of palm trees in their yards.

Coastal gardeners and those in Savannah, whose climate is moderated by the Atlantic, will have the greatest choice. Atlanta gardeners need not worry, as they can also plant a large variety of cold hardy varieties to enjoy at home.