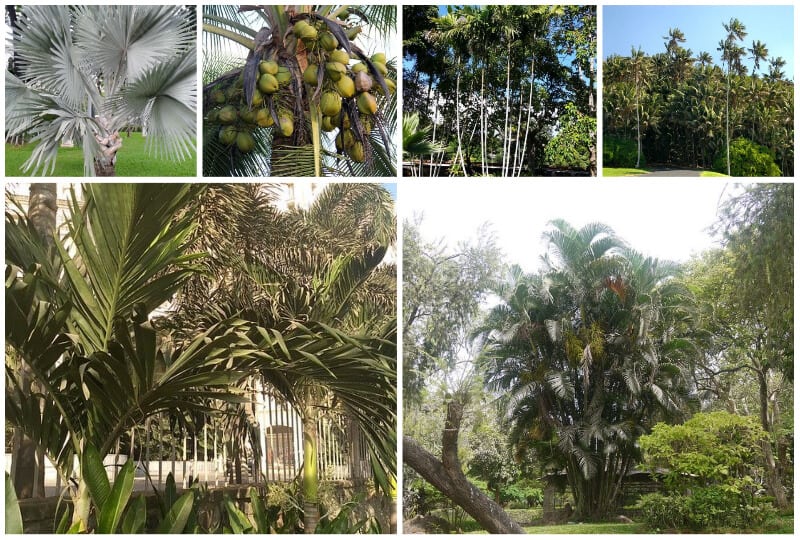 Hawaii is a tropical paradise, which, for most people is synonymous with arching, leaning palm trees swaying in the wind.

Many people may be surprised to find out that there is only one species of palm native to the Hawaiian isles (and it’s not the coconut palm).

The hardiness and planting zones of Hawaii run from 9a to 13a, this means the mild climate allows many different species of palm can be cultivated on the islands throughout the range of different microclimates on offer.

11 Palm Trees You Can Grow in Hawaii

Loulu is the local Hawaiian name for all Pritchardia that are found throughout the Hawaiian islands. They are ‘fan palms,’ which can be found in wet-mesic forests, mostly between 2,000 and 3,000 ft above sea level. Loulu are single-trunked trees, generally medium to large in size, with differences in color of the leaves, flower stem length, and hairiness depending on the species.

According to Maui Nui Botanical Gardens, there are 24 endemic species of Pritcahrdia native to 8 different islands, with each main island having a distinct species, and some remote valleys or mountains also having their own. Most Pritchardia feature broad rounded fan-shaped leaves with narrowly pointed tips that are either drooping or stiffly erect. The fruit are either oval or spherical and shiny black when ripe.

Fishtail Palms feature compound leaves that can grow to large sizes. The Fishtail palm is native to tropical Asia, from India/Burma to Java/South China. The leaflets feature a ragged shape that resembles the back end of a fish, giving the palm its common name.

The leaves are upright, arching, and bi-pinnate. In Southeast Asia, it can mostly be found in moist organically rich soil over limestone in disturbed wooded areas.

Clumping Fishtail palms can be a good substitute for bamboo as a screen, as certain varieties of the latter can quickly become difficult to manage. Plant away from strong winds and avoid overly dry sites. Fishtail Palms can tolerate light frosts but are not generally cold-hardy. The flowers bloom in the summer and are followed by fleshy berries.

The Bottle Palm is native to the Round Islands and Mauritius. Its common name comes from its enlarged, swollen base that tapers nearer the top of the tree, resembling a water bottle. They have only 4-6 arching, spreading leaves at any one time.

Young leaves have a red or orange tint, becoming green with maturity. The small number of fronds means the Bottle Palm won’t take up too much space or light, making it good for a tropical accent in smaller yards or garden beds.

The flowers of the Bottle Palm emerge from underneath the crown shaft and are monoecious with male and female flowers on the same inflorescence. Flowers are followed by 1 ½” long fruit containing a single seed. Bottle Palms are slow growers so do well as container-grown plants.

They grow best in moist, well-drained soils but will adapt to other soil types, and prefer full sun but will also perform well in partial shade.

The Coconut Palm is commonly found in Hawaii and is a single-trunked tree capable of reaching great heights. Coconut Palms are grown throughout the tropics in coastal areas, and were most probably brought to Hawaii by early Polynesian settlers due to their innumerable uses. Nothing spells tropical paradise like a coconut palm, with its smooth gray trunk and large, feathery leaves that flutter in the breeze.

Coconut Palms usually begin producing coconuts after 6-8 years and can fruit at any point throughout the year, taking about a year to fully ripen. Dwarf varieties can fruit sooner. Coconut palms are adapted to coastal areas so are naturally salt-tolerant and grow best in sandy soil.

Flowering Season: Throughout the year

The Red Sealing Wax Palm is a native of Southern Thailand, Borneo, and Sumatra where it can be found along rivers, swamps, and coastal areas. It’s threatened in the wild due to the ongoing destruction of lowland forests.

The common names come from the red color of the trunk and leaves. The base of the trunk is usually pale, with rings ascending until reaching the area where the leaves emerge, which is bright red. The pinnate leaves are a deep shade of green.

Greenish/white flowers appear in the summer and are followed by small fruit that turns black when mature. The Red Sealing Wax Palm can grow in areas with standing water and needs high humidity for growth.

It’s intolerant of dry conditions and strong winds. It’s a medium to slow-growing species in cultivation, making it suited for container growth provided it has a constant supply of water.

The Bismarck Palm is a slow-growing stately palm loved for the bluish-gray color of its large fan-shaped foliage. Bismarck Palms are native to the Western and northern parts of Madagascar and thrive in many drier parts of Hawaii as well as other dry parts of the subtropics.

The distinct leaves of the Bismarck palm arch upwards flaunting the unmistakable blue-gray hue of the foliage which can measure up to 4 ft long and wide. The dead leaves leave an attractive split pattern on the thick trunk.

The Bismarck Palm is dioecious, with separate male and female trees. Female inflorescence are followed by dark brown fruit. They can tolerate plenty of dry heat and short freezes, some salt spray as well as drought. There is also a variety with green foliage, which, according to Palmpedia is less cold-hardy than the more common type.

The Foxtail Palm is native to Australia and is loved throughout warm tropical regions for its bushy fronds which are said to resemble a fox’s tail. They are fast-growing and provide a lush feel to the landscape. They can be found as single- or multi-trunked specimens.

The trunk is smooth and gray and is topped by a bright green crown shaft. The self-cleaning leaves, usually between 8-10, measure between 6-10 ft long.

Foxtail Palms do best in full sun and are moderately drought tolerant once established. They can also withstand salt spray, so are suitable for landscapes close to the sea. They prefer well-drained sandy soils.

Kentia Palms are natives of Lord Howe Islands in the South Pacific. Thanks to their delicate arching leaves and unbeatable tropical appeal, they are popular as house plants around the world. The arching leaves are 10-12 ft long, with drooping leaflets. They prefer indirect light with some humidity.

Kentia’s produce 3 ½ ft infloresence of white blooms on 3-7 spikes. Male and female flowers exist on the same inflorescence and are followed by an ovoid, dark red fruit when the trees are around 15 years old. They can tolerate a wide range of soil types, including acidic, alkaline, clay, and loam, but will grow best in a well-draining sandy soil.

The Golden Cane Palm is a species of flowering palm native to Madagascar and naturalized in other similar climate areas around the world. They are clump-forming palms, slender, with a small to medium size, and a cane-like stem.

The greyish-green stem is covered in rings from old leaf scars. The fronds are pinnate with a pronounced midrib, yellow/green/bright green in color, and arch downwards. Older leaves have yellow-tipped leaflets.

The fruits ripen from yellow to purple. They can grow in the shade but look their best when planted in diffused light. Golden Can Palms prefer moist well-drained fertile soils.

The Manila Palm is a single-trunked palm with an erect gray trunk covered in evenly spaced leaf scars. The foliage consists of large compound leaves that arch upwards, although the leaflets droop downwards. The flowers emerge in groups of 3, with 2 males and 1 female on long pannicles, and are followed by large bunches of ovoid fruit.

The crown of the Manila Palm is symmetrical and light green in color. Manila palms grow best in moist well-drained soils and can tolerate small amounts of salt and shade, and have some drought tolerance once established.

The MacArthur Palm is a medium-tall densely clumping, fast-growing palm. The multiple trunks are gray, and slender and are topped with a dense crown of feathery, arching fronds that are paler on the underside and dark green above. The trunks feature prominent leaf ring scars. The inflorescence are multi-branched and appears from below the crown shaft and are off-white/cream in color.

Palms are, for many people, idyllic symbols of windswept sunny islands that emanate a sense of calm. Whilst Hawaii is only home to one palm species, the Loulu (Pritchardia) the warm climate means that many popular types of palms can be cultivated here with relative ease.