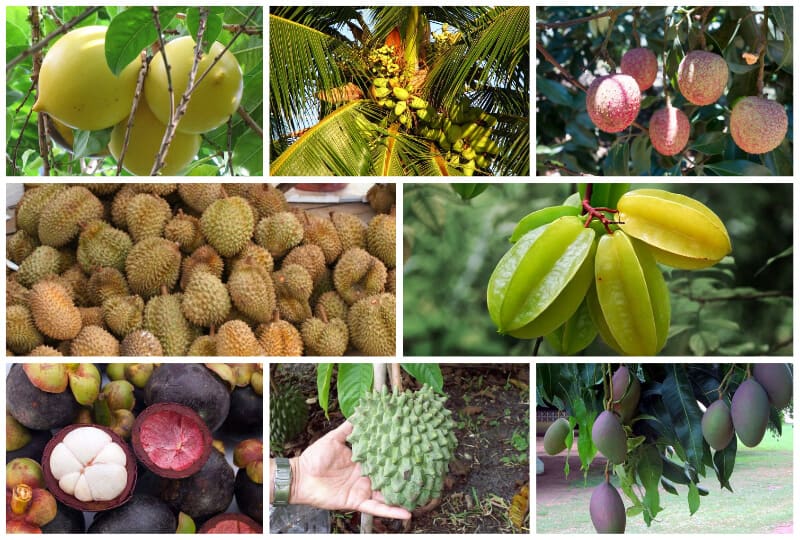 Hawaii is blessed with year-round warm weather, abundant rainfall, and rich, fertile volcanic soil, which makes it suitable for growing a wide range of fruit.

Whether you’re after more common fruit trees grown in the tropics or want to grow exotic fruit you can’t easily buy, many types of fruit can easily be cultivated on the Hawaiian isles.

Just make sure what you plant is suitable for your area by checking the hardiness map of Hawaii before planting.

Rollinia are natives of the Amazon basin and thrive in many areas of Hawaii, thanks to the fertile soil and warmth. Rollinia fruit resembles a creature from another planet or a mythical dragon.

The flesh is custard white, and very sweet, making it perfect for desserts or smoothies. The outer skin ripens to yellow from green, varies greatly in shape and size, and is covered with soft spikes.

Rollinia can be grown in Hawaii from fresh seeds between the elevations of 300 to 3000 ft above sea level, provide it has access to an adequate supply of water.

According to the College of Tropical Agriculture, it needs a hot and humid environment, with water spread out throughout the year. It’ll grow in a variety of different soils and is particularly fast-growing, capable of growing 10ft in a year and can fruit 2 ½ years after planting in ideal situations.

Mangosteen are a tropical fruit with a cult following due to the difficulty in finding them for sale and how picky they are with their growing conditions. However, growers in the right location with a bit of patience can reap the benefits that this beautiful tropical fruit offers.

Mangosteen can be planted from the fresh seed, as soon after eating the fruit as possible. They have sensitive roots so care needs to be taken when transplanting. On top of that, Mangosteen trees can take up to 20 years to bear fruit! The fruit has a thick dark purple outer skin, with white segments on the inside similar to a mandarin.

Flowering Season: After the start of the rainy season

Papayas are fast-growing fruit trees that are commonly grown throughout tropical and subtropical regions around the world. It’s favored for its sweet and juicy taste and the ease with which it grows in the right, frost-free location.

The Yellow Hawaiian Papaya has yellow skin when ripe, and a pear shape, with fruit and trees being smaller than the Mexican variety. The Mexican variety ripens to red and fruits can weigh up to 10 pounds, and aren’t as sweet than the Hawaiian type.

Papayas do best in well-drained sandy soil, away from any wind or breezes.

Mango trees are a common sight on the Hawaiian islands. They can be grown at elevations between sea level and 1500 ft, with the best production below 1200 ft, according to the Hawaii Cooperative Extension Service. Mango trees have a deep taproot and are adapted to a long seasonal dry season, making them suited for hot and dry leeward areas of the islands.

Mango trees are large evergreen with a symmetrical growth habit and should be protected from strong winds. Mango trees will grow in different well-drained soils, including sandy loams to red clay, provided there is sufficient drainage. Mangos are ready for harvest 3-5 months after flowering and should be picked when ripe from the tree for optimal sweetness.

Lychee trees grow well on windward sides of the Hawaiian islands. Lychees are in season from May to September in HI and are a beloved summer fruit. The fruit features a rough red skin encasing a sweet, white pulp and a single seed. The taste is somewhere between a grape and a strawberry/raspberry with a mild floral aroma.

Lychees can be grown in most well-drained soils in HI, from sea level up to 2000 ft, with 50-80” of rainfall according to the Hawaii Cooperative Extension Service. Be sure to provide protection from strong winds.

Cool dry winters are optimal as is a dry season between October and February, which is the reverse of what HI offers, so many areas are less than ideal. However, HI offers an abundance of varying microclimates in a short space.

Soursops are low branching bushy trees with upturned branches that most likely originated in the northern portion of South America. Since then they have spread around the tropics. The leaves of the Soursop are dark green and glossy on the upper side and paler on the underside.

They are oval in shape and pointed on both ends. The flowers are borne directly on the trunk and branches with three thick outer petals and three paler yellow inner petals.

Soursop fruit is heart-shaped or sometimes lopsided, up to 12” long and 6” wide, and can weigh between 10-15 pounds. Each fruit is covered in soft spines. The flavor is somewhat like pineapple, with sweet and sour/acidic tones.

Soursop doesn’t like the cold and needs some wind protection, so are mostly restricted to lower and middle elevations in Hawaii. They need well-drained fertile soil and can tolerate sandy or clay soils if they drain well.

Varieties Suitable for Hawaii: No named cultivars in Hawaii

Coconuts give water, milk, flesh, large leaves, and trunks that can be used in construction, for basket weaving, hats, mulch, etc. If you want the tropical elegance of a palm tree in your HI home, but don’t live in a suitable area, then there are plenty of other types of palm trees you can cultivate in the state.

Sapodilla trees are evergreen trees with rounded crown and are extremely hardy. They can tolerate salty air, wind, high heat, dry areas as well as humidity. The fruit tastes something like caramel, brown sugar, or maple syrup, whilst the texture is soft and granular.

They are round with a pointed tip, and their brown skin looks something like a small potato. The pulp ranges in color from brown to golden yellow.

Wild Sapodilla trees ooze latex (chicle) which was once used as the base for chewing gum. Sapodilla will grow best in well-draining soil. Sapodilla can produce year-round, depending on the conditions, but in Hawaii, their most prolific season is between June – January.

They can thrive in the wet tropics as well as cool dry subtropical areas. In tropical areas, they grow best in medium to low coastal areas.

Starfruit has five longitudinal ridges with a cross-section resembling a star. They come in both sweet and sour varieties, with sour varieties containing a certain amount of oxalic acid. They can be either light green, yellow or off-white in color.

The flavor is crisp, something like a mixture of grapefruit, kiwi, pineapple, grape, and papaya. Starfruit does best in moist areas with even access to water throughout the year.

Starfruit trees are attractive and are grown as much for their ornamental value as for their fruit and as beautiful flowering trees.

The branches curve and the fragrant purple/lilac blossom appear in large bunches and attract lots of pollinators. The leaves are glossy green and the fruit hangs down gracefully from the branches. The fruit can measure between 5-7” in length.

Starfruit grows best in moist loam that drains well and are not drought tolerant trees. They grow best at elevations below 1000 ft with protection from strong winds.

Abiu is native to parts of the Amazon rainforest and can be found in Brazil, Colombia, Venezuela, and Peru. it requires year-round warm, wet, and humid conditions to thrive. Abiu has a round/oval shape, with a pointed end. The unripe fruit is dark green and ripens to golden yellow.

The taste of the Abiu is unlike any other fruit, with many people likening it to creme caramel/flan with a hint of vanilla. Each fruit typically has two oblong seeds inside.

Abiu is enjoyed throughout Hawaii but is uncommon in supermarkets. It’s more commonly found in farmers’ markets or growing in people’s yards. It flowers and fruits year-round in HI, and it’s not unheard of to see flowers and immature fruit at the same time.

The flowers appear in small clusters either on the main trunk or on the leaf axils. The fruit reaches its mature size in just three weeks before ripening to golden yellow.

Breadfruit are common trees in Hawaii as the fruit is an important crop in Hawaiian culture. Breadfruit is a lowland equatorial species that grows best at elevations below 1000ft but can sometimes be found at elevations of up to 2000 ft.

Moderately ripe fruit is cooked as a starchy vegetable and is an important food source for security that contains vitamins, minerals, carbohydrates, and fiber.

Breadfruit can also be eaten ripe as a fruit. Trees produce an abundance of fruit, up to 200+ on a healthy tree, for up to 60 years. The leaves are large and glossy green with between 3 and 9 lobes on the apex. Breadfruit grows best in well-drained soils.

Durian, the so-called King of Fruits is simultaneously loved and hated throughout the world, especially in South East Asia. This is due to the strong aroma the fruit emits. The skin is hard and thorny, and the edible part of the fruit are the arils that surround the seed. The seeds can be eaten, and when roasted have a taste similar to chestnut.

According to Hawaii Cooperative Extension Service, Durian is believed to have been brought to the islands by Hawai‘i’s King David Kalākaua (1836–1891) from Bangkok after his circumnavigation of the globe.

Durian are ultra tropicals, needing warm, humid, frost-free areas at elevations below 3000ft. They prefer humidity between 70-85% with daytime temperatures around 85 F. They don’t like areas exposed to drying winds, such as O’ahu’s Trade Winds.

Durians need rainfall spread evenly over 9 months, with a dry season of 2-3 months, after which flowering occurs.

Growing Zones: 10-12. Ideally in the equatorial tropics; 23 degrees on either side of the equator

The Egg Fruit features a rounded oval shape, with shiny skin, an orange, yellow color, and a pointed tip. The flesh inside varies with the cultivar and can range from a dense to a flakier texture. The texture is creamy like a hard-boiled egg. The flavor has been likened to custard, pumpkin cheesecake, baked yam, and other such desserts.

Inside, there are between 1 and 5 seeds. Egg fruit is commonly eaten fresh or made into smoothies, milkshakes, or desserts. In Hawaii, Egg Fruit is commonly harvested between October and February. Egg fruit prefers a warm tropical/subtropical climate, with plenty of humidity and rainfall.

The islands of Hawaii have a tropical/subtropical climate where all kinds of delicious and exotic fruit can be cultivated. What you can grow will depend on many factors including your elevation, and what side of the island you’re on.

The windward side sees abundant rain due to the North Eastern Trade Winds, whilst the leeward side can be desert dry. Naturally, this affects what fruit crops can thrive in the area.

Ultra-tropicals can be grown in Hawaii such as coconut, cacao, and durian. Dry western sides of the islands are suited to dry climate crops, with date palms and other desert crops thriving and producing in some areas.

Other popular trees not mentioned above that can be cultivated in HI include the largest fruit in the world, Jackfruit (Artocarpus heterophyllus), and its smaller relatives Cempedak (Artocarpus integer) amongst countless others.