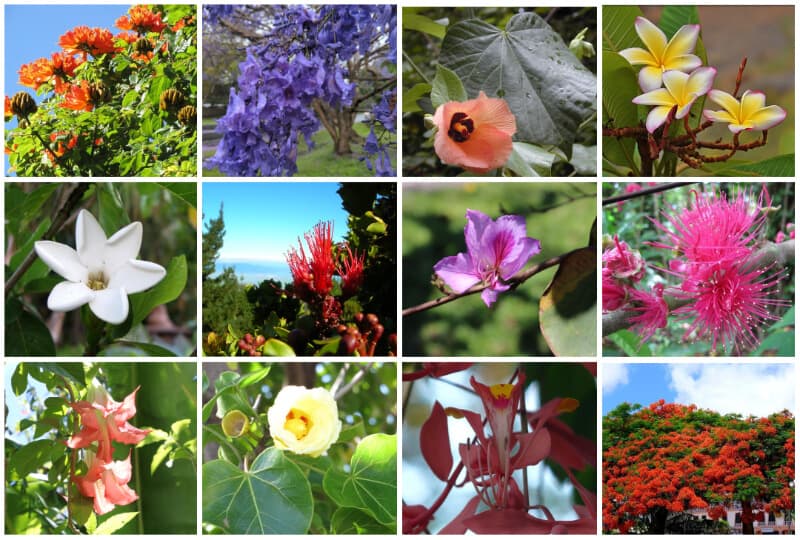 The bountiful islands of Hawaii are laced with spectacular flowering trees that lend the place its irresistible tropical allure.

While there are many native flowering trees, exotics are also commonly planted in urban areas. Thanks to Hawaii’s growing zones and mild climate, this means that you can plan your garden to provide year-round flowering trees.

Not only will this benefit your own aesthetic appreciation of your space, but local pollinators will also greatly benefit.

15 Beautiful Flowering Trees To Grow or Admire in Hawaii

The African Tulip is an impressive flowering tree with orange/red/golden trumpet-shaped flowers native to the tropical rainforests of Africa.

It’s a vigorous grower that is actually considered invasive in Hawaii. The leaves are large, glossy, and evergreen, and the seeds are dispersed by wind, bats, and birds. African Tulips thrive in a number of different Hawaiian landscapes, from wet to low-lying areas.

Whilst they prefer plenty of moisture, they are also moderately drought tolerant and once established will require little care or attention.

Frangipani flowers are heavily associated with Hawaii and are commonly planted around the islands. The flowers are given as lei as tokens of friendship, made into perfumes and numerous types of cosmetics. They are native to Central America and can tolerate a wide range of different soil types, but prefer hot and dry locations.

Frangipani’s feature an umbrella canopy of succulent branches laden with large, fragrant flowers that are borne or terminal clusters on the branch tips. The leaves are large, leathery, and elliptical. They are both drought and salt tolerant.

The Hawaiian Gardenia is a small tree native to Hawaii, that’s typically smaller in cultivation than in the wild. The leaves are large and glossy green, 1-4” long, and about half the width. In the wild, the leaves usually only appear on the branch tips, whilst in cultivation, they have much fuller foliage which they retain for longer periods.

The flowers of the Hawaiian Gardenia are solitary and white and appear on the branch tips. They are tubular, with 6-7 lobes, up to 1” long. The flowers last about a day, opening in the late afternoon. It’s dry forest species that was once thought to have existed on all the islands at elevations between 1100 and 1700 ft, according to Hawaiian Native Plant Propagation Database.

The Hau Tree is a perennial, evergreen flowering tree that was likely brought to HI in the canoes of the early settlers. The flowers change color as the day progresses; starting the day yellow and finishing it orange/red by the late afternoon.

They have 5 oval, crinkled petals and are 3” in length with reddish/green lanceolate sepals, often brownish, dark red/maroon at the base. Flowers are followed by black seed capsules.

Leaves are glossy green above, and lighter below with some thin hairs. The trunk of the Hau Tree is often crooked, gray/light brown and features spreading, curving branches. The Hau tree grows abundantly on HI’s coastlines and along beach walks.

The Royal Poinciana features fern-like leaves and red/orange/yellow flowers that are held in clusters above the leaves. The flowers contain 5 crinkled, spoon-like petals that are yellow outside and red inside. Flowers are followed by hard woody brown/black seed pods up to 28” long, containing large seeds. The leaves are bipinnate and alternate.

One reason Royal Poinciana’s are so treasured, aside from its floral display, is for its wide-spreading, low crown which is much wider than the tree is tall. According to wildlife of Hawaii, the Royal Poinciana has naturalized in some dry to mesic (moderately wet) disturbed areas.

Angel’s Trumpets are evergreen trees with multiple trunks. The flowers are pendulous, trumpet-shaped, and fragrant, and can be found in shades of peach, yellow, orange, and white.

The leaves are either entire or toothed and are arranged along the stems, and measure between 6-8” long. Brugmansia flowers are usually between 4 and 24” in length depending on the particular cultivar.

The fragrance of Brugmansia flowers is most pronounced at night time, and they can attract hummingbirds, moths, and other pollinators. It’s not fussy about soil type and can grow in sand, loam, clay, and organically rich mediums.

Jacaranda’s are native to South America and were introduced to Hawaii around 1900. They are favored for their purple/lavender, fragrant trumpet-shaped flowers which adorn the tree high up in the canopy. Jacaranda’s are common trees throughout Hawaii, but are most abundant in Upcountry Maui, according to Skyline Hawaii.

The arrival of the Jacaranda blossom has often been viewed as a sign of the coming of spring. They prefer well-drained, deep, rich soil but will adapt to many soil types.

The Pride of Burma has been nicknamed the Queen of Flowering Trees. It features compound leaves and bursts of big scarlet flowers dotted with yellow on the inside. New leaf growth is produced on pendulous cords and emerges purple before becoming green as they unfurl.

The trunk is slender and smooth, light grey to brown. The flowers appear on dangling clusters on terminal inflorescence, each with between 20-26 flowers. These are followed by a flattened seed pod containing 4-6 seeds. The Pride of Burma Grows best in moist, well-drained soils.

Flowering Season: After a flush of new leaf growth in the transition from the dry to the rainy season

The Portia Tree is a small to medium-sized tree that can be found on shores and close to mangroves. In HI, it’s found on almost all the main islands at elevations up to 900 ft. The wood of the Portia Tree was traditionally prized for the manufacturing of all kinds of things throughout the Pacific, as was the bark and fruit.

As such it was considered sacred and can often be seen planted close to temples. It was also supposedly only for use by members of the royal family.

The young leaves are edible, and the flowers are bell-shaped and yellow, with maroon/ purple middles. Woody seed pods follow with 5 cells and a downy surface that encases a single seed inside. These can persist on the tree for some time but only ripen in dry areas.

The local name Puakenikeni means 10-cent flower, as this is how much one used to cost. They are popular lei flowers, which can be harvested 2-3 times a week. The flowers change color as they age, retaining the same scent.

On the first day, they are cream-white, becoming dull yellow on the second day and a soft shade of orange on the third. There are numerous legends attached to this flower throughout the South Pacific, and the flowers are traditionally used to flavor coconut oil.

Puakenikeni is a fast-growing tree. Regular pruning encourages flowering as flowers appear on new growth. Removing seed balls is also recommended for more abundant flowering. The trunk is slender and the leaves are elliptical with a blunt tip.

The Yellow Tabebuia is a large stately tree with an unmistakable silhouette in the landscape. Golden/yellow flowers appear on the branch tips at the beginning of spring, signaling the end of the cooler months. They persist for around a month to create a verdant canopy on top of the single trunk. They are fast-growing, capable of growing up to 12” a year.

Yellow Tabebuia can grow in a variety of different situations in Hawaii and are moderately drought tolerant once established.

Orchid trees are common throughout Hawaii and get their name from the semblance of their flowers to orchids. They range in color from purple to crimson, red, white, and salmon. Orchid Trees are evergreen or semi-evergreen depending on the location, and medium in size. The canopy is spreading and consists of leaves resembling a butterfly.

Orchid Trees flower prolifically from late winter to early spring and appear near the branch tips with five unequal petals like a claw and are followed by flat sharp seed pods. The orchid tree will grow in moist well-drained soils and is drought tolerant once established.

Bottlebrush trees get their name from the flower spikes that appear at the end of the branches. Most Bottlebrushes bloom in crimson or red and last for a long period over the warmest months. Bottlebrushes are easily grown in any well-drained soil. They can be pruned into a multi-stemmed shrub or as a small tree.

They are drought and salt tolerant once established and are perfect for HI gardeners who want a fuss-free flowering tree for their yard. They are slow-growing, and may only reach 5-10 ft in 5 years, so may not be suited for the impatient gardener.

The ʻŌhiʻa Lehua is native to the islands of Hawaii and are important symbols in the local culture. According to Hawaii Magazine, they are heavily referenced in local mele (songs), oli (chants), and moʻolelo (stories). They thrive in the rocky soils and are often the first to colonize recent lava flows and as such, are most common on the Big Island thanks to its open rocky terrain.

In the wild, they can be seen in many different forms, from single trunked trees to small spreading shrubs depending on their growing conditions. The flowers come in a range of different colors, including red, yellow, orange, salmon pink, and rarely, white.

Flowering Season: Sporadically throughout the year, but most abundantly in spring

The Mountain Apple mostly grows in low elevation, wet to mesic windward forests in Hawaii, and not in the mountains as the common name implies. The flowers appear on old wood or the trunk and feature small cupped, magenta, or red petals (rarely white) and numerous red stamens dotted with yellow anthers that attract many birds in search of nectar.

The Mountain Apple is a fruit tree, with flowers being proceeded by small pear-shaped red, pink, or white fruit (occasionally red and white streaked) up to 4” long. The fruit has a crisp, refreshing, rather bland taste with a slight floral hint. They can be eaten fresh or cooked.

The leaves are glossy dark green above, lighter below, and elliptical to egg-shaped. When the new foliage emerges it has a bronze/pink hue.

Flowering Season: At the start of the rainy season

The tropical/subtropical climate of the islands of Hawaii means that there are plenty of trees in bloom throughout the year. Thanks to the mild winters and subsequent long growing seasons and fertile volcanic soils, there are always colorful blossoms to be admired around every corner.

Why not plant your favorites in your yard and enjoy the floral show for years to come? Just be sure to check that they are suitable for your area beforehand.