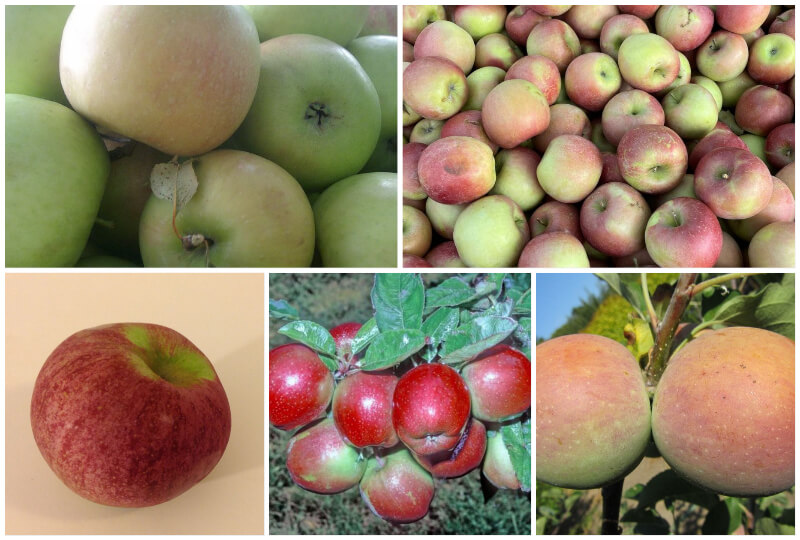 Apples are enjoyed across the world for their crisp fresh taste.

There’s nothing quite like fruit from your backyard that tastes nothing like the commercially grown varieties available.

There are countless varieties of apples grown across the globe, and fortunately, there are plenty of tasty varieties that’ll withstand CT’s winters.

Whether you like your apples crisp and crunchy or soft and sweet, there’s a variety you can grow in your own backyard to harvest your own homegrown apples.

Macoun Apple is a cross between the McIntosh and Jersey Black. They are medium-to-large-sized fruit with a deep red/purple/black blush when ripe.

The skin underneath the blush and close to the stem sometimes is bright green. The flesh of Macoun Apples is creamy white and simultaneously tender and sharp.

The flavor is extra sweet, fresh, and mild, reportedly with hints of wild berries and spices, and strawberries making them prized as a dessert fruit. Macoun Apples ripen in the fall and early winter months.

Macoun is often considered one of the best-tasting apples by growers in the northeastern states, especially fresh from the tree. Macoun Apple trees tend to produce a heavy harvest, followed by a lesser one the following year.

The Baldwin is one of the oldest and most popular New England Apples. It’s a large crimson fruit over a coppery green base undertone. The flesh is creamy white, crisp, and juicy. It has a pleasant scent and a sweet and sour, mildly spicy flavor. The fruit has a rounded to conical, slightly lopsided form.

It holds its shape well when cooked, making it suitable for both eating fresh and for baking or cooking. Baldwin apples are ready to be harvested from October through November.

The Baldwin was one of the most popular Northeastern apple varieties for 50 years, up until the early 1900s. It’s a small and hard fruit that stores well, making it suitable for shipping. Baldwin apple trees also produce heavily each year under favorable conditions.

Crispin Apples come from the Mutsu province of Japan. They are a cross between Golden Delicious and the Indo Apple.

They are large-sized apples with golden-yellow/green skin and tender, crisp coarse, and fresh-tasting flesh. Crispin apples are best in October and November and can be eaten either fresh or used in cooking.

Crispin apples are enjoyed for their complex flavor which encompasses sweet and spicy notes with a hint of honey. They are also very juicy and as such can be enjoyed fresh, but also store well for several months.

One potential downside for some is that Crispin apples don’t pollinate other varieties and only produce well biennially, so it may be prudent to plant alongside other more productive varieties, especially if space is an issue for you.

Paulared is a medium-to-large sized apple variety, with an ovate/round shape and a squat appearance with flattened ‘shoulders.’ The skin is thick and slightly tough and has a red blush and striping over a yellow-green base coloring and a slightly matte finish. The flesh is firm and crisp with a small core.

When harvested early in the season, Paulared apples have a firm and crunchy texture, but develop a softer, mushier flesh when harvested later.

The flavor of Paulared apples is sweet and tart, with hints of strawberry and pear. The flavor varies depending on when in the season they are harvested. They can be eaten either raw or cooked. Picking them early in the season is when they are best for raw consumption, whilst harvesting later is better for cooking.

Paulared apples are semi-sterile, so will need another pollinating apple tree or crabapple nearby for cross-pollination to ensure fruiting.

The Liberty apple is a popular modern hybrid apple variety with a sweet and mildly tart flavor that offers a high level of disease resistance. The fruit is medium to large in size with a bright rosy red color and ripens in October.

Liberty apple is resistant to the two most common afflictions to apple trees; fire blight and apple scab. It’s also not picky when it comes to climate and soil type. The only significant drawback of the Liberty apple is its short shelf life, usually only lasting only until December.

The fruit has an ovate to conical shape, and the base color of the skin is yellow, but this is usually obscured by the red top which typically covers 90% of the apple.

The flesh is yellow and crisp, and the taste is juicy and crisp, tangy with balanced sweetness. Liberty apples aren’t particularly sensitive to cold and like a bit of warmth for the best fruit production.

Liberty apples aren’t fussy about soil type, and have a medium growth rate with plenty of branching that forms an over-hanging crown. They produce reliable yields year after year if not over-pruned.

The Spartan Apple is the Canadian version of the well-known McIntosh apple. The fruit has a deep red color and is smaller in size than the McIntosh.

If left on the branch long enough, they can develop a deep purple/red color. The Spartan is a popular variety due to the large amount of fruit it produces every year, and its small attractive size.

The taste is sweet, but not overpoweringly so, with a light aroma. Once picked, they have a long shelf life when kept in cold storage and are great for juicing. The Spartan Apple needs well-draining soil and should be fertilized during the growing season.

You’ll need another apple variety with the same flowering time for cross-pollination to ensure fruiting. Since it flowers in the middle of the growing season, it can be pollinated by most other varieties.

The Spencer is a cross between the two main types of apples grown commercially; the Mac and Golden Delicious which are used extensively in modern breeding.

Whilst relatively unknown, it remains popular throughout the Northeastern states. The fruit is oblong/conical with a light scarlet red blush and is crisp, juicy, and more sweet than tart. It’s not as sweet as Golden Delicious.

Spencer ripens after McIntosh and stores relatively well. It’s good to eat as a dessert apple but is also an all-rounder, working well in pies, and sauces. Spencer is self-sterile so will need another variety for pollination. It’s slow to bear, but produces annually once it finally fruits.

Silken is an early-season apple with a pale yellow color, sometimes with a pink blush or light russeting close to the stem. It’s conical in shape, medium-sized with a tender and creamy white flesh that’s aromatic, and has a delicate, mild, sweet, and juicy flavor. Like many early-season apples, it doesn’t store well so is best eaten fresh.

Silken is a cross between Honeygold and Sunrise, another Canadian Apple. Both parents contain Golden Delicious in their lineage which accounts for their color and sweet taste. Silken has a moderately spreading growth habit. It ripens in late summer or early fall, and will need a pollinator to set fruit.

The Fuji apple is one of the sweetest apple cultivars and reportedly one of the most popularly grown varieties in the States.

Fuji apples were discovered in the 1930s and are a cross between Red Delicious and Virginia Ralls Janet. They are a perfect choice for those fruit growers with a sweet tooth looking to add a sweet apple to their orchard or backyard.

The skin of Fuji apples features red over yellow. They have a sweet, firm, and juicy taste and texture. The flesh is creamy white and fine-grained. Fuji apples store well so can be enjoyed throughout the year. They are typically harvested in the early fall and can be enjoyed fresh, or in cooking or baking.

Be sure to plant another apple variety that flowers at the same time to ensure cross-pollination and fruit set.

Jersey Mac is a sweet, juicy, and tart apple and is great eaten fresh, baked, or cooked into apple sauce. It’s noted for its distinct strawberry flavor tones and bright white flesh.

The skin is dark red and rather tough. Jersey Mac is ready for harvesting around late August. The fruit is medium to large in size, whilst the tree has a semi-flat appearance.

The Jersey Mac is actually an early-season McIntosh apple. It originated at Rutgers University’s College of Agriculture in New Brunswick, New Jersey.

The Pink Lady apple was developed in Australia in 1973 and is a cross between Golden Delicious and Lady Williams. They have a distinctive reddish-pink blush to them. Pink Lady apples have only been commercially available since the 1990s in the United States. They are rigidly firm and have a sharp, tart flavor.

The Pink Lady is a moderately vigorous tree that holds onto its leaves well into the winter months. It’s often the first to bloom and the last to be harvested.

If you’re looking for an early flowering tree that will also provide you with a harvest in CT, then look no further. They require a long growing period and a warm climate so can only be grown in the warmer apple growing regions.

Strong autumnal sunlight is vital for the development of the characteristic deep red coloration, which is why some growers remove the upper leaves of the tree or allow the sunlight to reach the fruit. Apple Rankings lists the Pink Lady as one of its top-scoring varieties which isn’t surprising, given its global popularity.

Evercrisp is a cross between Honeycrisp and Fuji and is a late-season apple. It is said to embody the firmness of the Fuji and the sweetness and juiciness of the Honeycrisp. The Evercrisp is new on the apple scene, having been developed in 2008 in Ohio. They can be enjoyed fresh, cooked, or paired with savory food.

The Evercrisp, as the name implies, is perfect for growers who want to grow who want to bite into a fresh crisp apple grown in their own yard. They are usually harvested between October and February.

Apples are the most popular fruit grown throughout the United States and growers who live in the state of Connecticut can be part of the fun. The majority of the state of CT sits in hardiness zone 5, so there are a wealth of delicious apple varieties that can be grown.

Whether you love your apple crunchy and crisp, sweet or tart, eaten fresh or cooked, there is no shortage of varieties for you to choose from to grow in your own CT backyard.