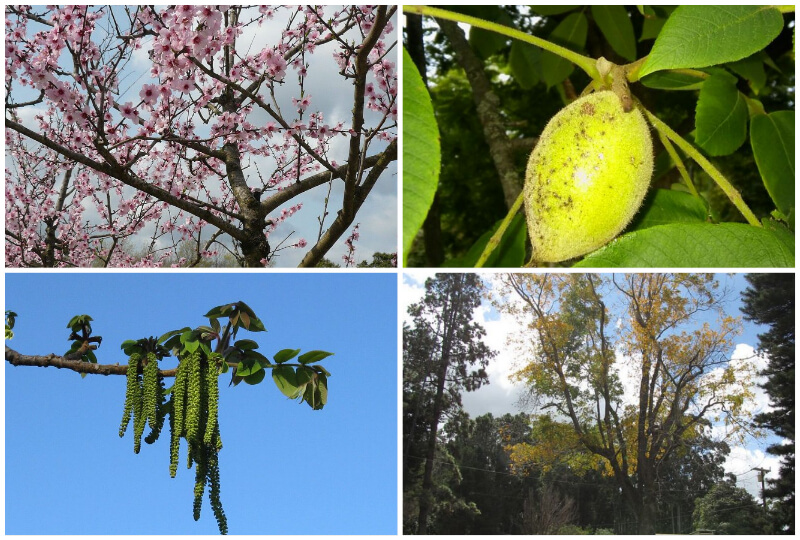 Nuts are a valuable plant-based protein source for humans and other animals alike. Nut trees can be grown much in the same way as fruit trees but often require less care and attention, even in the cold New England climate.

Nut trees are a good perennial food source and can provide you with a high nutritional food crop year after year without much input.

Your biggest challenge will often be getting to the nuts before the squirrels do.

Hazelnuts are easily grown. They are grown not only for their delicious and nutritious nuts but also for their wood and as hedging. They are vigorous multi-stemmed bushes that are often coppiced for their wood but can be pruned into a small tree. They have an upright habit and a rounded head. The foliage is doubly serrate and medium green in color.

Male catkins are long and pendulous and attract many bees and pollinators with their scent. The female flowers are inconspicuous red tassels that dangle above the male catkins. The nuts follow in terminal clusters in leafy, hairy green husks.

Hazels can be grown in almost any moist well-draining soil provided there’s enough organic matter. Hazels are hardy down to zone 4, but when cultivating them towards the end range of their zone, choose American Hazels (Corylus americana) over the European variety as they a more cold tolerant.

Black walnuts are native to Connecticut and thrive in the cold winter and mild summer climate. When grown in the open, the Black Walnut can reach a height of up to 75 ft tall with low spreading branches, and in forests or plantations may soar to up to 150 ft in height.

They grow in a rounded shape. The nut of the black walnut is ready to be harvested by early to mid-autumn. A green fleshy husk encases a hard black shell where the oily sweet edible kernel lies.

The leaves of the Black Walnut are pinnately compound, and alternate, measuring 12-24” long and consist of 15–23 dark green finely toothed leaflets 2–5″ long. The foliage is dense and they offer good shade. They are self fertile and are pollinated by wind. Planting more than one tree will give you higher yields, should you have the space.

Black walnuts have a deep taproot so are difficult to transplant once established. They begin to bear fruit after 12-15 years. Whilst they aren’t for those short on space or time, they will reward the patient with plenty of delicious and nutritious nuts for years to come.

The Shagbark Hickory is native to much of the Eastern United States and Southeast Canada. It’s a large deciduous tree that can live up to 200 years. They can easily be identified by their bark which peels off in long, thick, thin strips off the straight trunk. It retains a single trunk until high up into the narrow oblong crown.

The leaves are bright green and pinnately compound, becoming golden in the fall, before turning a warm shade of bronze before being shed.

The hickory nuts are thick-shelled and have a sweet taste when consumed. Shagbark Hickory will grow in full sun, or partial shade. According to the University of Connecticut, they prefer deep, well-drained soil. They are slow-growing and difficult to transplant due to the deep taproot. Various types of birds and squirrels feast on the catkins and nuts.

The Heartnut is a relatively obscure relative of the Japanese Walnut. It’s catching on in northern areas where it proves difficult to cultivate other kinds of nuts. The common name comes from the resemblance to a heart the nut bears, both inside and outside.

The taste is reportedly similar to the common walnut, but they are extremely difficult to crack which has stopped them bring exploited commercially. They are fast-growing trees with lush green foliage that remains unaffected by serious pests.

The Butternut is a short tree with a squat, thick trunk and stiff branches forming a broad, wide-open crown. The butternut fruit is encased in a sticky husk. The leaves are long stemmed and pinnately compound and turn yellow in the fall.

The mature fruit turns rancid quickly after falling, so need to be harvested quickly. They are also enjoyed by many forms of wildlife. The nuts contain a brown stain that is used as an orange or yellow dye and the timber is valued for woodworking.

Hall’s Hardy Almond is a perfect choice for anyone looking for a small fruiting and ornamental flowering tree aside from the more commonly grown apple trees. Late spring sees the appearance of masses of small pale pink flowers.The nuts are large with a thick shell encased by a green inedible fruit. The kernel is bittersweet and can be harvested around September/October.

The simple alternate leaves are dark green, 3-6” long with a finely toothed margin. Halls Hardy Almond grows in a rounded shape. Whilst self-fertile, planting a few other trees will increases the chances of pollination. The nuts are also enjoyed by birds, small mammals and deer.

Northern Pecans grown in the open can develop gigantic trunks and rounded to oval crowns of spreading branches that extend down the trunk. Wild trees in the forest develop narrow pyramidal crowns.

The fruit appear in husks in clusters of 3-6 that change from yellow-green to brown when they mature. Inside is a long oblong reddish to light brown shell with a rounded base and a sweet edible kernel.

The compound leaves are up to 20” in length and feature 9-17 slightly toothed leaflets, each 4-8” long. Plant more than one Northern Pecan to ensure pollination. The Northern Pecan prefers full sun and will grow in alkaline, acidic, moist, sandy, silty, rich well-drained wet clay soils.

The American Chestnut struggles with disease and blight, but the Chinese Chestnut can be grown without these problems. The nuts ripen in mid-to-late September/October. A 2 – 3 ½” seed husk encases 1-4 large, sweet nuts. However, they aren’t typically as sweet as those of the American chestnut.

The Chinese Chestnut has a wide spreading canopy and provides dense shade thanks to its rounded shape. The leaves are simple and alternate, dark green in color, 3-5” in length with a toothed margin. The Chinese Chestnut will thrive in hot dry areas. The nuts are also a valuable food source for many forms of wildlife.

Nuts not only provide a valuable perennial source of protein for humans, but are also a valuable food source for local wildlife. Many nut trees are also big in stature and can provide a stately appearance in the landscape should you have the room.

The large taproot of many of the species listed above means that they often require little in the way on maintenance. The ornamental value of nut trees cannot be understated either, especially in the case of the almond, a hardy variety of which may thrive in areas of CT.