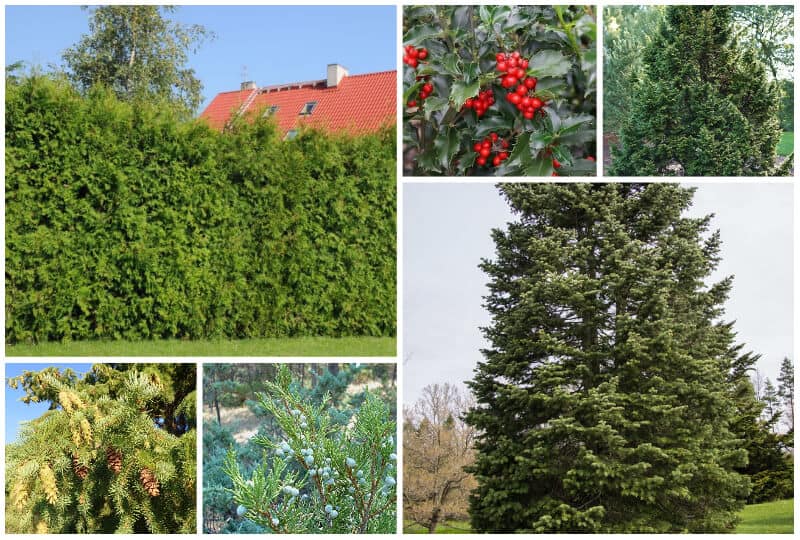 Privacy is important for feeling at home in a place. In order to truly relax and recharge, sometimes we need to disconnect from our modern lives and reconnect to the natural.

Instead of building a wall or a fence, why not plant a living structure for your privacy needs? Trees can not only block out unwanted sights, and minimize noise pollution, but can also turn your backyard into a veritable oasis. So instead of buying a wall why not plant one?

Just be sure to check the hardiness map of Idaho before planting.

The Green Giant is fast-growing, capable of putting on 3-5 ft of growth a year once established. It’s perfect for blocking out views of neighbors or the street, and its dense growth habit serves to limit noise.

The foliage is thick, dark green, and remains present all year round. The Green Giant Arborvitae grows in a symmetrical form, meaning you don’t have to worry about maintenance unless you want to train them into a hedge.

Green Giant Arborvitaes will grow in almost any soil, including sandy loams or heavy clays, in full sun or partial shade.

The Canadian Hemlock is a tall evergreen tree that thrives in partial shade but can tolerate full sun. It can grow in regions too cold for many other trees and also withstand heat. Thanks to its central trunk, pyramidal shape, and languorous feather-like foliage, it features a gorgeous silhouette. The needles are dark green with a greyish underside.

Planted densely, the Canadian Hemlock will provide a dense privacy hedge that can also protect your home or garden from strong winds and noise.

The Blue Princess Holly provides dense, blue-green, evergreen foliage and ornamental red berries, provided there’s a male pollinator close by. The teeth have wide edges and teeth and remain evergreen throughout the year. They are hardy in both hot and cold climates, so can thrive in most of the state of Idaho.

Pollinated females provide small red berries in the fall that persist into the winter or until eaten by the birds. They look unbeatable when covered in snow, and are often used for Christmas decorations.

The Douglas Fir is a large native tree grown for timber but is also suited for the home landscape. It grows best in areas with hot summers and cold winters, in full sun and grows into a pyramidal shape as it matures.

While in the wild Douglas Firs can tower to 300 ft in height, there are smaller varieties suited to the home landscape. They should have one strong central leader so young trees with two should be pruned. Other than that, they look best when left alone, so plant them in an area large enough to accommodate them.

The Douglas Fir is monoecious, with both male and female strobili on the same tree. The cones are long, brownish/red with pronounced bracts between the scales. It’s one of the fastest-growing evergreens around, capable of growing 3 ft a year, making it perfect as a privacy tree. Plant in well-drained moist soil.

The White Fir is a coniferous native evergreen planted extensively in parks and public areas. It’s native to mountain slopes in the Western US, between 3000-9000 feet in elevation. It features blue/grey needles, ½ to 3” in length, that curve upwards.

It grows in a pyramidal shape and is popular as a Christmas tree. The cones are oblong, 3-6” long and change from olive green to purple to brown upon maturity. It’s an important wildlife tree for both food and shelter.

The White Fir is exceptionally hardy, capable of thriving on harsh sites, making it seriously low maintenance once established.

The Upright Juniper is a tough, hardy, drought and heat-tolerant tree, perfect as a privacy hedge or screen for the drier parts of ID. It features a short trunk and several main limbs with a rounded to columnar shape.

Juvenile foliage has a whitish coat, whereas adult foliage is light green to dark bluish. The cones are berry-like, dark blue, round, and are covered in a white film, opening in their second year.

The Upright Juniper has a narrow crown and features drooping branches and aromatic wood.

Trees provide innumerable benefits to the world and the home environment. Tall dense evergreen trees can serve as living privacy screens and block out neighbors’ and passer by’s peering eyes.

Trees absorb more sounds and wind than simple wooden fences and will also continuously sequester carbon back into the earth.

There are many different types of trees you could choose for your privacy screen in ID, just make sure you do your research beforehand to ensure your success.