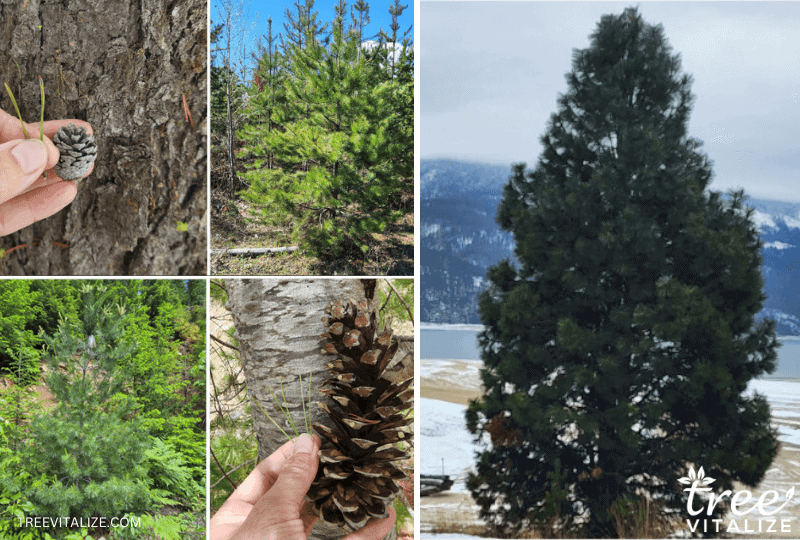 The genus Pinus is of ancient origin, believed to have come into existence some 180 million years ago. Pine Trees are coniferous and can be found throughout most of the Northern Hemisphere. There are over 100 different types of pine trees found spread out in North and Central America, Europe, and Asia.

Pine trees are known for their cones, which can be either male (pollen-producing) or female (seed-producing), and their needle-like foliage which can be found in colors ranging from dark green to bluish-green.

They can measure up to 11” long and usually appear in groups of 2-5. Pines are long-lived trees, usually drought tolerant, fire resistant, and generally very hardy and capable of growing in areas other trees would struggle.

Read on for more information on five types of pine trees you can find in Washington state.

5 Types of Pine Trees That Grow in WA

The Lodgepole Pine can be found in mountainous and coastal areas of WA. They can be seen as either shrubs or trees depending on where they are growing, and there are 4 different subspecies.

Many Lodgepole Pines grow in twisted and contorted shapes, with a broad spreading crown. The needles are 2 per bundle, and slightly flattened. The cones are long and egg-shaped. Some cones open and release seeds soon after maturity, whilst others can remain unopened for years.

Lodgepole Pines not subjected to high winds can develop a broad spreading canopy, and still retain the twisted trunk.

The Ponderosa Pine is the most widely distributed pine in North America and features a pyramidal, open crown. The branches are short, pendulous, and upturned at the edges. The needles are dark green to grayish/yellow-green and occur in groups of 2 or 3. There are 3 main varieties based on geographic location.

The Whitebark Pine features spreading, ascending branches and a narrow, conical crown that becomes flattened as the tree ages. The bark is thin and gray and develops into hexagonal or rectangular plates on older trees. The needles are held in fascicles of 5 and persist for 3-4 years, are blue/green, and are shed early in the season.

The seed cones of the Whitebark pine take 2 years to mature and are shed not long after. Its natural habitat is in lowland fog forests and other moist mountainous areas, in either mixed forests or pure stands.

The Whitebark Pine is a subalpine tree found east of the Cascades crest, according to WTA. They are small to medium-sized trees with irregular, spreading crowns and short twisted trunks. Needles appear in groups of 5 dark, are yellow/green and the bark is thin, whitish, and sometimes scaly on older trees. The smell and taste of the needles are sweet.

Female cones are egg-shaped or rounded, brownish/purple, and appear on unswept branches near the top of the tree. Whitebark Pine numbers are declining because of white pine blister rust, fire suppression, and mountain pine beetle. Fire suppression allows the proliferation of more shade-tolerant species.

The Limber Pine can be found in both moist areas and dry rocky areas in high alpine parts of WA. It has a pyramidal shape when young becoming more rounded with age. At higher altitudes in exposed sites, it can grow in dwarf, twisted, and contorted shapes by the extremity of its elemental exposition. The needles are dark green/bluish green, 3 ½” long, and are held in fascicles of 5.

The cones of the Limber Pine have thick scales, a brown color, and are about 8” long. The common name comes from the flexibility of the twigs and branchlets. Limber Pines grow best in averagely moist well-drained soils in full sun but can adapt to many other conditions.

Pine trees are hardy and adaptable trees found throughout the northern hemisphere. The needles impart a lovely fresh scent, and many of the cones produce edible seeds that are rich in calories, providing a valuable food source for small animals over the winter.

Be sure to check the Washington planting zone you are in, in case you’re thinking about planting any of the pines mentioned above on your property.