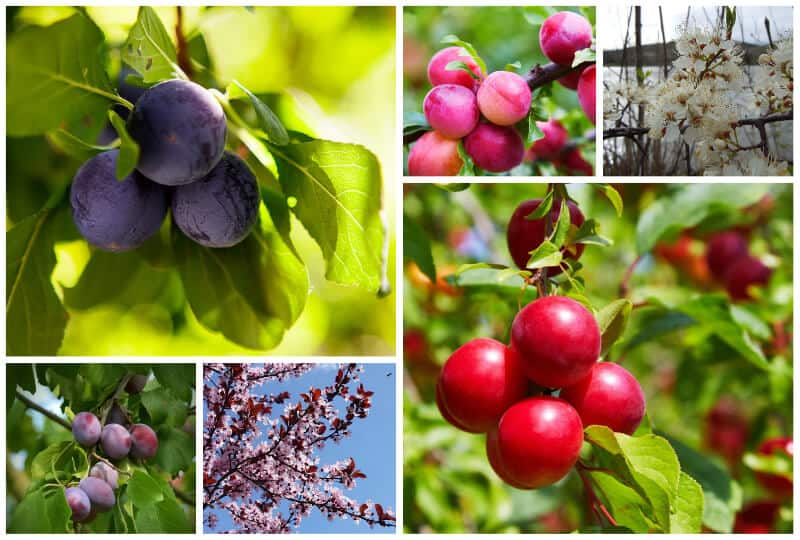 Plum trees are relatively hardy, and there are various varieties perfect for growing in USDA zone 4.

While some plum trees are mainly considered ornamental trees, there are several that are not only edible but delicious too.

Take a look at some popular, and lesser known plum trees that will grow in your Zone 4 yard.

Toka plums have been around since the early 1900s. These beautiful plums are nicknamed ‘bubblegum plums’ because of their distinct fragrance and sweet flavor. This fruit tastes so much like candy that you might forget you’re eating something healthy.

The Toka plum’s fragrance and flavor profile are enough to plant a couple in your yard. However, one of the reasons it’s such a prized fruit tree is its ability to produce enough pollen every year to pollinate other plum trees in the fruit orchard. The interesting thing about the Toka tree is that it’s self-fertile, so it doesn’t require another plum tree to set fruit, but because they’re so delicious, you’ll want to have more than one.

Aside from the sweet plums, the vase-shaped tree provides loads of creamy white flowers every spring. You can expect to see various pollinators stopping by for some of the bountiful pollen and sweet nectar.

While all those benefits are reason enough to plant a few, add to the fact that these bushy trees make excellent privacy trees. You can add it to the list of zone 4 privacy trees!

Lydecker or black ice plums can handle weather as cold as -30℉. Meaning there’s no reason to fret when temperatures drop well below freezing.

One of the many things I love about this plum tree is how the branches spread out and weep over the trunk. It creates such a natural architectural display, which is a sight to behold. Small white, waxy flowers bloom during the spring, standing out against the lush green foliage.

Once late July arrives, big, purplish-black plums fill the boughs of the tree. When I say big, I mean big. These beautiful fruits average the size of a tennis ball. The black ice plum tree is the tree child of the California cherry plum and Japanese plum. The size of the fruit is inherited from the Japanese variety, making it one of the largest hybrid plum trees on the market.

I’ve heard that Superior plum trees start producing while they’re young. The beautiful fragrant flowers displayed in the spring are picturesque, and you’ll know that a bountiful harvest will soon be behind.

These plums are large with fire-engine red-colored skin with deep golden-yellow flesh. The rich flavor is that of a classic plum. Growers can enjoy them fresh off of the tree. They also make excellent jellies, jams, and desserts.

Krauter Vesuvius flowering plum trees are excellent early bloomers. You can expect beautiful showy pink flowers to grow in the hundreds. The new leaves arrive beautiful and bright red, turning into shades of deep red-purple foliage. Did I mention that the leaf color is consistent all season?

This plum tree is an easy-to-care-for flowering tree, making it a beautiful ornamental to add to the zone 4 list. KV plum trees are widely adaptable. They’re urban tolerant and moderately drought tolerant as well.

Suppose you’re looking for an early bloomer. In that case, the Krauter Vesuvius Purple Leaf Plum is an excellent option since they’re one of the earliest small trees to bloom in the spring. As the pink blossoms begin to fade, you’ll notice small, new leaves emerging in their brilliant red tone.

The deep red-purple-colored foliage remains bold and dark throughout the fall.

If you’ve heard the story ‘Twas The Night Before Christmas,’ you might recall the part about the visions of sugar plums dancing in the kid’s head. While they may have been referring to an old-timey dessert, we’re talking about actual sugar plums.

Sugar plums are also referred to as prune plums, and this variety is one of the oldest in cultivation. While they might be the oldest, they’re still one of the most-loved plums available on the market.

These medium-sized fruits contain the highest sugar content of all plums, hence their name. The white flowers bloom in the spring, transforming into oval plum-colored fruit that can be enjoyed fresh, in preserves, jellies, and dried.

This self-pollinating tree stays relatively compact in size, working well in even small gardens and landscapes. While you won’t need a pollinator to receive a bountiful harvest, you might want more than one.

The Native American Plum can be grown as a single-trunk tree or a multi-stemmed shrub. They’re adaptive to various locations and soil conditions. It’s also drought-tolerant.

As a shrub, they work well growing along any hedge, but they make an excellent ornamental shade tree as well. This beautiful specimen is typically grown for its decorative value rather than fruit production. However, the fruit is edible and can be eaten by humans or left to feed the local wildlife.

The beautiful clusters of 5-petaled flowers bloom in the spring. Growers can expect the toothed, oblong leaves to fill out by the summer, and they’re quickly followed by little 1-inch plums that ripen early in the season.

Native American plums have yellow flesh that can be eaten raw. However, they are most suitable for jellies and preserves. When autumn arrives, the leaves begin to turn yellow to red. The colors are outstanding against the attractive reddish-brown branches and twigs.

Fruiting Season: Late May to mid-summer

Finding cold-hardy nut trees and fruit trees to grow in zone 4 can seem like a chore. Which is why I wanted to take the guesswork out of the equation for you.

This list contains a variety ready to harvest throughout every part of the harvesting season, from early to late.

Elaina has had her hands on the Earth since she was little. For over a decade, she’s been tending gardens and learning about plants and trees.

A seasoned writer with a green thumb, Elaina loves to write about everything from gardening and homesteading to health and wellness.

When she’s not in the garden, you can find her in the chicken coop, with her rabbits, or somewhere in the woods with her cats and dog.