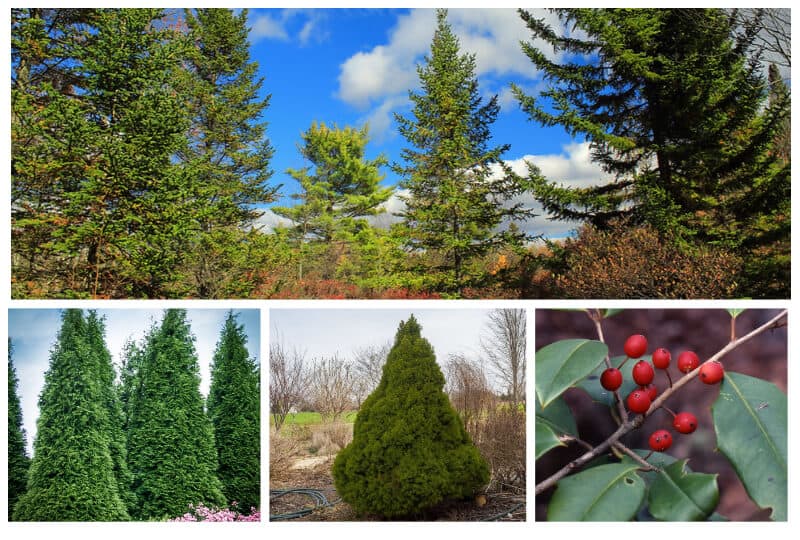 Wisconsin falls in USDA zones 3 to 5. For this reason, most evergreen trees that are hardy enough for the state’s cold climate are conifers.

Conifers are a group of plants that produce seeds in a cone. Some, such as pines and spruces, have needle-like leaves. At the same time, others, such as firs and junipers, have scale-like leaves. Such contrasts with the broad leaves of trees such as oaks and maples.

A notable broadleaf evergreen is American holly, the source of the classic Christmas wreath. This ornamental evergreen tree is cold-hardy enough for some regions of Wisconsin.

Evergreens are lovely in the landscape because they provide vibrant green color when all is brown. Many evergreens such as giant green arborvitae and eastern red cedar are excellent screens and windbreaks in the landscape.

7 Evergreen Trees Worth Growing in Wisconsin

American holly is not a conifer, unlike the evergreen trees on this list – bearing broad leaves like oaks and maples. This beautiful evergreen tree is popular in Christmas decorations, especially wreaths.

American holly features leathery dark green leaves. The trees are non-glossy and have sharp teeth at the margins. The tree forms a pyramidal shape, and, with some pruning, it makes an excellent hedge.

American holly is known for its red berry-like fruit—various species of birds feasts on its berries.

The tree produces greenish or cream flowers that are not obvious to sight but have a welcoming aroma. These flowers attract pollinators such as bees.

It is better to plant at least 4 American hollies together to encourage lots of cross-pollination. The benefit of doing so is that you will have a lot of red berries.

American holly does well in either full sun or partial shade. That is at least four hours of direct sunlight each day. It is native to the bottomlands and swampy areas of the southeastern United States. As a result, the tree strongly prefers acidic, rich, and moist soils.

Unfortunately, only landscapers in zone 5 can plant American holly. This zone is along Lake Michigan and in southern Wisconsin.

Black spruce is native to the northern half of Wisconsin and much of Canada. As a side note, spruces belong to the same family as pine trees.

Such explains why they also have needles. Black spruce needles are blue-green, short, and stiff with upturned ends. The needs have a pungent smell when crushed.

This evergreen tree is slow-growing and small with a narrow growth habit. The tree’s lower limbs tend to sweep the ground as the branches descend. The immature seed cones are small with a purplish tint.

They linger on the tree for many several years. Black spruce’s bark is thin, scaly, and greenish-brown.

Wet soil is a nuisance as few trees strive in them. But black spruce is an excellent addition to your landscape if you have wet soil, as it tolerates these conditions better than other spruces.

A healthy and robust black spruce is the product of sun exposure and moist and acidic soil.

The common and scientific names suggest that this is a Canadian tree. But it is far more abundant in the forests of the northeastern United States. Its natural range stretches from Wisconsin to New England and the Appalachian Mountains.

Canadian hemlock is an example of vigor and beauty. With its pyramidal shape, this tree stands out in any landscape. This evergreen is ideal for screens, groupings, and foundation plantings.

Much of the popularity of this evergreen tree in the landscape is because it is easy to shear it into any desired shape or height.

A member of the pine family, Canadian hemlock has soft, feathery, deep green needles. Like other conifers, nature trees yield an abundance of brown cones than hang from the branches like ornaments.

The tree does well in acidic, loamy, moist, sandy, and well-drained soils. It will not tolerate heavy soils. Also, it doesn’t have drought tolerance.

Canadian hemlock is happiest in at least six hours of direct, unfiltered sunlight each day. Under ideal conditions, it will grow up to 24 inches each year.

Eastern red cedar is one of the oldest trees in North America; fossil records show that it covered large portions of the continent. Early colonial artisans used its wood to make furniture and fences. It was also a staple wood for the pencil-making industry for many years.

Nowadays, Eastern red cedar is used mainly as a windbreak and screen in the landscape. They offer such because of its deep and strong roots. The tree grows in a columnar or pyramidal shape.

Eastern red cedar features scale-like medium evergreen foliage. The tree makes rounded fruit that looks like berries. They are bluish-green and about ¼ inch wide. Birds such as cedar waxwings enjoy its fruit, while many others take advantage of its dense evergreen foliage for nesting and roosting.

This sturdy tree is not too picky about soil – striving in a range of well-drained soils. Eastern red cedar can withstand some flooding and features good drought tolerance.

The giant green arborvitae is a rapid grower; it can grow up to 3 feet per year.

Its beautiful foliage is glossy, dark green, and dense. In winter, it darkens or bronzes slightly. The foliage has a rich and pleasant aroma when squeezed. In addition, the tree yields ½-inch-long cones which emerge as green in the summer and becomes brown as they mature in the winter.

Giant green arborvitae maintains its pyramidal shape with little to no need for pruning. This tough conifer tolerates wind, heavy snow, and ice – all of which Wisconsin residents know well. Thanks to their fast growth, a group makes an excellent screen, hedge, or windbreak.

On care, giant green arborvitae tolerates many soil types except for wet soils. At least four hours of direct sunlight each day is ideal for this tree.

Japanese yew is known for its red ornamental fruit. Native to several regions of Asia, this conifer is primarily used in the landscape for decorative purposes. It responds well to pruning which makes it a great hedge tree. In some cases, landscapers use it as a shade tree because of its dense canopy.

There are many cultivars of Japanese yew. ‘Aurescens,’ which displays bright yellow foliage before maturing to green, is a popular variety. Also, ‘Expansa,’ which, as the name suggests, spreads much wider than other cultivars.

You can grow Japanese yew in any light condition, from full shade to full sun. It is an excellent choice for shady spots as it tolerates shade much better than most evergreens.

Japanese yew grows best in well-drained soil with medium moisture. Also, it is not susceptible to any major pests or diseases.

Average Size at Maturity: 20 – 40 feet tall with a similar spread

White spruce grows in a pyramidal form with dense foliage. Its growth habit makes it a typical Christmas tree. Though as the tree gets older, it forms a more columnar shape. It grows at a medium rate, about a foot or two each year.

White spruce features slightly curved, pale green needles, about ½ to ¾ inches long. The ones are slender and cylindrical with light brown color with flexible scales. They measure 1 ½ to 2 ½ inches long.

This evergreen tree gets a lot of attention for its versatility and strength. It works well as a windbreak or screen. Also, it has excellent tolerance to cold, crowding, drought, heat, and wind.

Growing white spruce is easy. It tolerates a variety of soils as long as they are well-drained. It prefers at least six hours of direct sunlight each day but will tolerate some shade.

Choose from Needles, Scales, and Broadleaves

An interesting takeaway from this article is that evergreen trees come in needles, scales, or broadleaves. Most broadleaf evergreen trees are not cold-hardy enough for Wisconsin except American holly. But this beautiful tree is only hardy in Zone 5, so an excellent choice for those in Milwaukee and Madison.

As such, any evergreen trees that do well in Wisconsin are pines, spruces, cedars, junipers, and yews. These rugged conifers can withstand the frigid winter, especially since many of them are native to Wisconsin. Among these, a great choice is the giant green arborvitae. It is beautiful, fast-growing, tough, and has many uses in the landscape.

One category of evergreens that is missing from this list is pine trees. We have already written a great article on those that we recommend you take a look at.