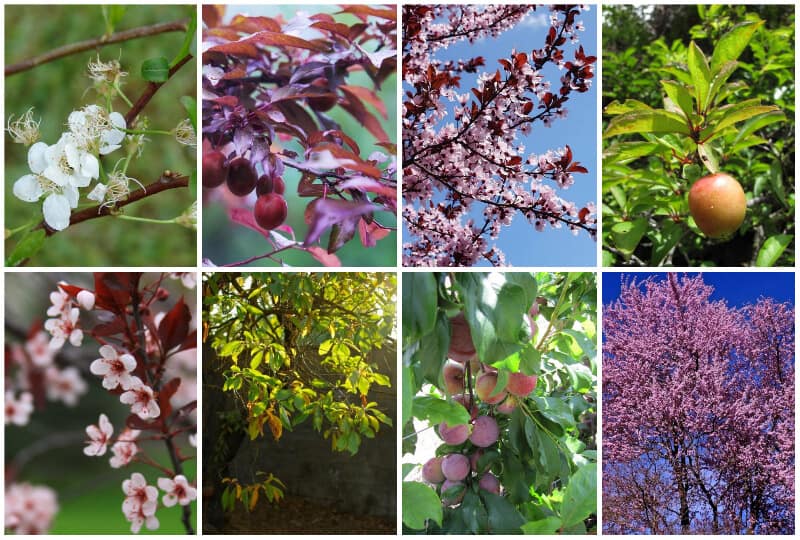 Plum trees have so many benefits and are a great choice for everyone, whether you’re a beginner gardener, creating your landscape, or building a beautiful food forest.

For starters, plum trees have beautiful foliage, amazing spring blooms, and yummy fruits. They’re also really easy to care for, don’t take up much space, and many are self-fertile!

Most plum trees can grow in all of the Texas USDA Hardiness zones. Even for the varieties that can’t be planted everywhere, they can be planted somewhere in the state. So, there’s a plum tree for every region!

These trees are really low-maintenance and will give you loads of fresh fruit and beauty in return for little care.

Keep reading to discover eight varieties of plum trees and which one would be best for your space!

Santa Rosa is definitely one of the most popular fruit trees because of its sweet and juicy plums and a reliably large harvest every year.

The plums are average sized but the amount that you’ll reap from this tree is tremendous! Harvest begins in mid summer and continues through the end of the summer.

Santa Rosa is a self-fertile tree that grows very quickly and will start producing fruits in the first few seasons. It can also handle a wide range of soil types and pH levels, making it an easy option for many growers.

However, it’s observed that Santa Rosa Plum trees don’t grow very well in the southeast of the U.S., so they wouldn’t do well in eastern TX. These trees only need 300 chill hours, so planting in central TX would be ideal.

Methley Plum tree is another common variety because of its huge production of dark purple, juicy fruits. This tree is also indeterminate, meaning it will begin fruiting in mid-summer and continue for the following two to three months.

Methley Plum is a great choice for growers in southern TX, since it only needs 150 to 250 chill hours to flower. This tree is also very heat tolerant and doesn’t require very much water.

These trees have an open, rounded crown that can be pruned back to keep the tree smaller depending on the space you have.

In the spring, Methley Plum trees bloom with soft, white flowers that cover the tree like a light layer of snow. They’re also self-fertile and will begin fruiting within the first few seasons.

You might not have known this, but there are many plum tree varieties that are planted for their ornamental beauty more so than for their fruits! Because plum trees have such amazing foliage and spring blooms, they’re also a great choice for decorative landscaping!

In early spring pale pink flowers blossom and are followed by deep bronze-red leaves that last all summer long and stay through the fall.

These trees are a great option for anyone in Texas, since they’re pretty cold hardy but also heat tolerant and adaptable to many soil types. These trees are beautiful for landscaping but can also be planted together for privacy fences.

Hollywood Plum trees are loved equally for their fruits and their ornamental beauty- and can be planted either way! These trees are one of the first to bloom in the spring, providing a fresh relief to the winter cold.

Following the sweet, light pink flowers are the leaves which are green when they first appear but then quickly turn red for the summer. They then fruit with plums throughout the end of the summer.

Hollywood Plum trees are self-fertile and also quite small, so they’re a great choice if you want to grow fruit but don’t have much space. There aren’t many small fruit trees like this!

Plus, their size means less pruning and overall easier maintenance. This means very little work for fresh fruit and a gorgeous flowering tree.

Satsuma Plum trees are also quite popular and are widely grown for their juicy fruits. These are a great pick for gardeners anywhere in TX because these trees love sunshine but are also cold hardy down to 0 F!

Although, Satsuma Plum trees do require a pollination partner to bloom in the spring. You can plant them with any other variety of plum tree, even if the other is self-fertile.

These trees are small to medium sized and grow in a compact shape, so they don’t take up space for most growers. Plus, they grow fast and smaller size means less pruning work!

These plums are super juicy and have very small pits, meaning more fruit! They’re also really sweet fruits- perfect for jellies and desserts, or eating right off the tree.

Burgundy Plum trees typically fruit within the first few seasons and are self-fertile, so you don’t need much to start having fresh plums in your yard!

These trees are a great pick for anyone in northern TX, since Burgundy Plum trees are cold hardy down to -10 F and won’t have problems with frost injury. They will only grow south down to central TX, but further south will be too hot for them.

The KV Flowering Plum is another variety that’s more often grown for its look than its fruits. These trees are also frequently called Cherry Plums because they’re related to cherry trees and have similar flowers.

In early spring, KV Flowering Plum is covered with fragrant and soft pink flowers. The leaves then appear while the flowers are still in bloom, filling in the branches with dark red foliage.

Ornamental plum trees have some of the darkest red foliage, that’s often closer to deep violet and can sometimes look black. These leaves are darkest when the tree is grown in full sun.

KV Flowering Plum is a great choice for landscaping anywhere in central or northern TX and doesn’t grow very tall, so it can be maintained in a small space.

Thundercloud Plum trees can be planted for ornamental or edible gardens, because this tree is great in both ways! It’s more commonly planted for landscaping, but its fruits are tasty and sweeter than most ornamental varieties.

The flowers are followed by bold, dark-red leaves that quickly cover the whole tree. The leaves often come up before the flowers have fallen, so there’s a period where the tree is covered in both and looks amazing.

Thundercloud fruits with tasty and juicy plums in the summer. These fruits aren’t as large as the cultivated fruit varieties, but they’re completely edible and will be enjoyed by birds and wildlife if you don’t harvest them!

A Plum Tree for Every Need

You probably didn’t know that plum trees have such amazing flowers and look so great, even when they’re not heavy with juicy fruits. Personally, I love plums and that’s reason enough for me to grow one, but the floral show is a huge bonus!

These trees are quite easy to grow and, especially in Texas, they don’t require excessive pruning or any special care. The majority of plum trees can grow anywhere in central and northern TX and there are several heat-tolerant varieties that would be perfect for southern TX.

Between the fruits, flowers, and easy care, it seems to me that plum trees would be a great choice for every Texas gardener trying to grow more of their own food.

I hope this article helped you learn which plum tree variety would be best for your growing space and encouraged you to get planting!

Peyton considers trees not just as plants that provide shade or yummy fruits, but as necessary for a healthy life and community.

Peyton has done most of her research on environmental politics, but recently has shifted her focus towards actual agricultural practices, learning about ideas like agroforestry, food forests, and permaculture gardening.

She’s most often in the kitchen whipping something up, but otherwise can be found on long bike rides or doing research.